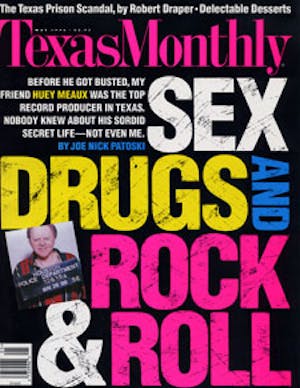 NOT MANY COMPANIES OWE A GOOD BIT OF THEIR SUCCESS TO flatulent chickens. Not many boast two Pink Floyd exes among their key officers. And not many list Michael Milken, the eighties junk bond czar, as a major investor. But 7th Level, a computer-game maker based in Richardson, has all this and more, and in its brief but well-publicized existence, it has been scrambling to turn the glitter—and the gas—into gold.

If you aren’t a parent with kids or a young male of the species, your eyes probably glaze over at the mention of CD-ROM games. But if you fall into either of these groups, chances are you know 7th Level. Of the six titles the company has released since it was founded three years ago, the highest-profile is Monty Python’s Complete Waste of Time, an homage to the British comedy series featuring outrageous video clips and loony animated sequences of flying pigs and the aforementioned flatulent chickens. To date, it has sold more than 200,000 copies—a certifiable hit in an industry where sales of 100,000 are considered good. Then there’s Timon and Pumbaa’s Jungle Games, an arcade-style romp starring the scruffy warthog and meerkat from the big-screen hit The Lion King; released last Christmas, it has already sold nearly 200,000 copies. The success of these and other titles helped 7th Level take in net revenues of $12.2 million in 1995, triple those of 1994, and boosted the company’s two public stock offerings, which raised a total of $67 million. Analysts worry about both the yo-yoing of high-tech stocks and the fact that the company is still posting net losses ($13.8 million last year) as a result of millions spent on research and development. But they think that in 1997, 7th Level will show its first profit and take in net revenues between $50 million and $75 million, which could make it one of the biggest game producers in Texas—if not the biggest.

Whatever the future holds, 7th Level today occupies the middle ground between the state’s best-known game producers: Origin Systems, the creator of the Wing Commander series, and id Software, the creator of the phenomenally successful Doom. Origin has three hundred employees at its Austin headquarters; 7th Level has two hundred employees in Richardson, Cincinnati, San Francisco, and Glendale, California; id has fourteen in a black glass office tower in Mesquite. Origin projects revenues of $53 million this year; 7th Level could do $35 million to $45 million; id, which is privately held, doesn’t release such figures, but estimates put its 1995 revenues around $20 million. In the number of games released, however, 7th Level has an edge: It will put out ten new titles this year, versus a projected four by Origin and only one by id. And where Origin and id aim at hard-core gameplayers, the sixteen- to forty-year-old male audience, 7th Level casts a wider net; besides the addicts, its games target youngsters, and some even appeal to grown-ups.

The way 7th Level has broadened its demographic reach has been crucial to its success. It’s not just the company’s strong philosophical commitment to education, which is rare enough in the software business. It’s the alliances the company has cultivated within the entertainment industry. First, 7th Level has cut deals with film companies to create games based on hit movies. Disney co-produced Timon and Pumbaa’s Jungle Games, and Morgan Creek International will co-produce two games based on Jim Carrey’s Ace Ventura character. 7th Level has also recruited big-name show business talent. Comedian Howie Mandel is the voice of Lil’ Howie, a cartoon bear who emcees The Great Word Adventure, a lively vocabulary workout. Charles Fleischer, who provided the voice of Roger Rabbit in the big-screen hit Who Framed Roger Rabbit, will do the same for Virgil Reality, a nutty professor in a forthcoming educational release. And for older computer users, 7th Level plans a music CD-ROM by pop and jazz impresario Quincy Jones.

Star power can’t guarantee success, of course, but it certainly helps when your business climate is volatile, and that’s the case with multimedia today. While sales are soaring—$2 billion in games will be sold in 1996—store shelves are overstocked with the more than three thousand titles produced each year. It doesn’t help that game sales are highly seasonal (a bad Christmas can trash an entire year) and that software and hardware systems are mutating faster than an African monkey virus. But perhaps the greatest question mark of all is ownership—whether stand-alone companies can survive. This past February, for example, CUC International of Connecticut shelled out $1.14 billion for Davidson and Associates, a maker of educational game software, and another $1.06 billion for Sierra On-Line, a major entertainment software company.

George Grayson, the coolly collected, decidedly un-nerdish CEO of 7th Level, isn’t fazed by this kind of change. He knows a thing or two about it, having been present at the beginning of the personal-computer revolution fourteen years ago. He and his brother, Paul, were regarded as industry innovators for writing the program PC-Draw—the first graphics application for the IBM PC—and had used it as a launching pad to start a Dallas software company called Micrografx in 1982. By 1990 Micrografx was well known not just for its pioneering work but for the chili cookoff it threw annually at COMDEX, the giant computer industry trade show held each year in Las Vegas. The main purpose of the cookoff was to raise money for Grayson’s favorite charity, the National Center for Missing and Exploited Children; in 1991, after Grayson gave his spiel about the center, he was approached by Scott Page, an ex—Pink Floyd saxophonist who had come to COMDEX to push a CD-ROM called Music Bytes. “I liked what George was saying, so I went over and introduced myself,” Page recalls. “He was a fan of Pink Floyd. We hit it off right away.”

As it turned out, they had another thing in common. Grayson was itching to move into multimedia and was looking for a way to link up with Hollywood; Page had an audio-visual production company called Walt Tucker. Grayson flew Page to Dallas to see Micrografx, and eventually they agreed to collaborate on a light-and-sound show at the next COMDEX, in November 1992. To coordinate the show, they tapped Page’s record producer pal Bob Ezrin, who had worked not only with Pink Floyd but also with Alice Cooper, Kiss, and Julian Lennon. The show was called the Grand Scientific Musical Theater, and it was a circus. Jon Anderson from Yes, the Turtles, the Nevada Symphony Orchestra, Graham Nash, and Cirque du Soleil performed while artist Peter Max “painted” on Silicon Graphics machines. Fourteen thousand people stopped by to listen and gawk.

Totally jazzed, Grayson flew back to Dallas and pitched the Micrografx board on acquiring Walt Tucker. He was in for a nasty surprise. Not only were the directors not interested, but they were not amused by Micrografx’s slumping earnings. They wanted Grayson to give up day-to-day management and become co-chairman. A heated argument ensued, and Grayson resigned. “It was done behind my back,” he growled to a reporter at the time.

That night, Grayson called Page and Ezrin. “I was shocked—that company was his baby,” Page says. “I tried to talk him out of it.” But Grayson was adamant. Two months later, the three met at his house in Parker, in a room over his garage, and sketched out the details of 7th Level. “We came up with the basic business plan and decided what to call it right then,” says Ezrin. (The name refers to the highest, or seventh, level, as in the mystical power of seven, the seventh seal, etc.) They also started a first project—an animated CD-ROM for tots called TuneLand—to show investors.

By April 1993 they were beginning to look for financial backing. At the time, only a few people outside the computer industry had a clue as to what “interactive multimedia” meant, much less that it would become a profitable industry. It took a certain amount of vision to see the potential, and although the three men received encouragement from Hollywood honchos, a significant source of support came from an unlikely quarter. An investment banker friend of Ezrin’s who had worked at the investment bank Drexel Burnham Lambert was invited to a party for Michael Milken, who had just served 22 months in federal prison for securities fraud. While exchanging pleasantries, the broker mentioned 7th Level. Milken, who was interested in investing in entertainment software, was intrigued. He asked to meet the company’s founders.

“Back then,” Page recalls, “the only available animation we had was a little dancing broom from TuneLand.” But they showed it to Milken and talked about their vision for marrying entertainment and education. Grayson, who has two children, and Ezrin, who has five, felt strongly that computer games could teach you how to think. “If you take a five-year-old,” Grayson says, “and put him in a game where he has to keep track of twelve things—what he was told by the characters, where he has been, where he is going—he’s learning something.” Milken then talked about what he hoped to do with his fledgling educational entertainment company, EEN. “I just sat there,” Page says, “feeling the hair stand up on my arms, because what Milken wanted to do was so in line with what we were planning.”

Several meetings later, Milken invested in 7th Level for what is now worth roughly 15 percent of the company. “I think he’s a genius,” Grayson says. “He is a big-picture thinker who understands global financial trends like nobody I’ve ever met.” Grayson is not worried about Milken’s history as a Wall Street bad guy or the Securities and Exchange Commission’s recent investigation into Milken’s holdings of stock in toymaker Hasbro, as well as into his role giving advice in merger deals to media moguls including Ted Turner and Rupert Murdoch. (Milken is banned by the SEC for life from any involvement in the securities business.) Executives at 7th Level feel that in the long run, the publicity will help rather than hurt. Anyway, they say, his longtime efforts to bring math skills to inner-city children in Los Angeles have helped him redeem his reputation. So confident are they of Milken’s appeal that they’ve asked him to be the voice of a wizard in a new three-part game series called Mike’s Math Adventures.

The first title of that series will be released in 1997—just one of many projects that Grayson looks forward to down the road. Five years from now, he says, the company could be more than twice its present size. “I expect we will have five hundred to seven hundred and fifty employees worldwide,” he says, “with production studios in Germany and Japan and sales offices in several different countries.” By that time, he adds, CD-ROMs could be on their way out. “Ultimately we will be a worldwide network—probably on the Internet,” he says. “We will have an education channel, a role-playing channel, a strategy channel. At that point the lines between TVs and computer networks will begin to blur. It will be a global communication system that has been unknown in the past.”

No matter what the future holds, however, one thing remains constant, and that is content. Which is why 7th Level plans to expand its successful games into series and, inevitably, is following up its biggest success with a game based on the cult film Monty Python and the Holy Grail, due out in June. Education may be key to the company’s philosophy, and Hollywood may provide the hype, but when it comes to making a profit, never underestimate the appeal of flatulent chickens.