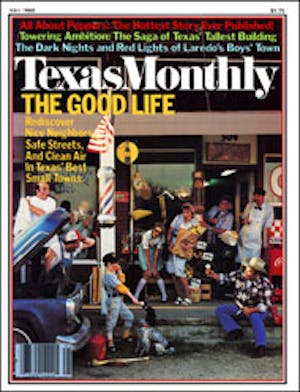 Most days Fred noses open the door when he hears the clock radio, then pounces on the bed and roots around until he can get me to rub his ears. One morning I didn’t miss him at first, but when I found him lying on the landing I knew he was dying. I carried him into the yard and tried to set him on his feet, but he fell over, helpless. Something terrible had happened during the night: Fred was paralyzed. I feared that he would not live long enough to make it to our veterinarian’s office. As usual, with pets as with children, it was the worst possible time: the all-night emergency clinic had already closed and regular office hours had not yet begun. I thought for a moment about just staying with him in the yard until he died. Many things frighten Fred—thunder, guns, strange men, big dogs, all cats—but veterinary offices terrify him. Still, I hoped for a miraculous cure I knew was beyond reason. Since I had work that needed to be done, I left him with the vet’s assistant and waited for a call.

The vet’s initial diagnosis was that Fred had suffered either a stroke or a broken blood vessel in his brain. In all likelihood he could not be cured. We all cried that night, and our two boys pretended to be men and said they would like to kiss Fred good-bye before the doctor put him away. I planned to stay with him myself. I thought I owed him that much. I’d bought him ten years ago to replace another beagle some kids had maliciously shot on the same weekend my oldest son was born.

Fred’s mother had been a field trail champion in Vermont, and he was muscular and deep-chested for pushing though the deep drifts that snowshoe hares can skim over. When he was young he would hunt for hours in subfreezing weather, with or without me. After we moved south of the snow and into the city, I spent $500 on a six-foot fence to replace the four-foot fence he could jump. It contained him for two days before he climbed it and commenced to hunt bunnies. I gave up and, eventually, so did the dogcatcher. Even so, Fred was a bargain. I couldn’t remember a day when the silly beast hadn’t made me laugh out loud at least twice. He was the handsomest beagle I ever saw, but much too foolish to be vain; as loudly as he bugled after rabbits, so he sounded when himself pursued by tomcats. His voice and his cowardice combined to make him a fine watchdog. We had this compromise: he would stand guard if we pretended not to know he jumped up on the furniture when we went up to bed.

But the doctor called again in the morning. He’d noticed a pain reflex, which ruled out the previous diagnosis, and x-rays revealed a cervical vertebra slightly out of place. Either from trauma or from a degenerative condition common to short-legged dogs, a spinal disk was pressing against the cord. It was possible surgery could correct it. The vet could do the operation, but it was very delicate; he was enough of a professional to confess his limitations. Only one place could save Fred: Texas A&M.

I yield to no man in my love for Aggie jokes and my uneasiness at the very sight of those awful burr-headed cheerleaders they have in College Station. But I knew that A&M’s veterinary school was the largest in the country, and arguable one of the best. Friends had told us about two attorneys they knew who had decided to become veterinarians, gone back to school from preparatory courses, done well, and been turned down by Texas A&M. They had consoled themselves with medical school and are now practicing physicians. We figured Fred would be in good hands.

Dr. Basil Long, as blunt and self-confident as most surgeons, warned us that if tests showed Fred’s liver and kidneys to have been seriously damaged, the surgery would not be worth doing, because infection would take him before long. In veterinary medicine, decisions are always partly economic. Fortunately, Fred’s liver and kidney functions were above average for a ten-year-old beagle, and Long thought his gameness was also a positive indicator. Lying on his side and able only to move his head and wag his tail slightly, Fred continued to eat heartily and thumped the floor when someone who had been nice to him came by.

I was not able (and did not want) to be there when Fred went under the knife, but I did spend an afternoon in the surgical ward with Long, whose principal practice is neurosurgery, when I went to pick Fred up. At first the experience was disorienting. The large-animal clinic has operating rooms the size of handball courts and hydraulic tables that can be raised from floor level, to which horses and cattle are attached by belly straps and then, once sedated, turned on their sides. But the small-animal clinic is remarkably like the surgical ward in any other hospital, except that the unconscious patient I saw under a mound of green sheeting was a 175-pound Great Dane. His head protruded from under the sheets, tubes for anesthesia vanished down his throat, and his huge-pawed back leg lay open like a sausage to the red meat and white bone. As I and a small group of students watched, Long and a student assistant used a power saw to cut an inch out of the curved radius in the dog’s foreleg to cure a laming disease. Surgery—especially orthopedic surgery—requires the use of force. The saw kept getting stuck the way a chain saw sticks in green wood, and Long had to wrench it out and twist the leg for a better angle.

Then in the hall a brief emergency: a dachshund coming out of anesthesia went into spasms. Long put down his saw and attended to the small dog by injecting Valium into his veins. The atmosphere was as tense as in a regular hospital. I remarked to a technician that at least they didn’t have to contend with Saturday night violence; he reminded me that while dogs don’t shoot each other, people shoot them frequently. Long, no sentimentalist, told me that dogs and cats maim and kill each other in fights all the time. And there are other kinds of folly, like the man who brought a small dog to the clinic with a fishhook in his nose and a pint of Scotch in his belly. Anesthetic, you understand. The fishhook took two minuets to remove; the Scotch put the dog in a coma for four days.

While Long had used strays to practice the procedure he performed on Fred, our beagle was his first paying customer. The surgeon made a long, vertical incision in Fred’s neck, pushed aside his esophagus and windpipe, and laid bare the underside of his spine. Careful not to knick blood vessels (which would have made it impossible to see what he was doing), Long removed the disk pressing on the spinal cord between the second and third cervical vertebrae and also scooped out the neighboring disks to prevent recurrence. Then he used a small drill with a burr to plane away the inside surface of the vertebra so that the cord would have room the swell and, we all hoped, heal. After that there was little to do but wait.

Nothing could have prepared me for my dog’s happy reappearance several days later in the hallway of the clinic. Fred was greeted by several of the students as he was led down the hall (unlike physicians, veterinarians are permitted to love their patients, and Fred has always been quick to sense a soft touch). Seeing me, he jumped up for a pat with the zeal born of a dog’s eternal dumb optimism. But when the adrenaline had gone and he was tired from the ride home, it was obvious that his motor control was not back to normal. He looked like a very old dog but walked with the uncertain coordination of a puppy. Although in the two weeks since he came home he has gotten stronger every day and now looks younger, he still cannot run and has only in the last week begun jumping on the furniture again. But now he does it in broad daylight, and we let him. Long says that with luck Fred will soon be able to go into the joyous gliding run with which he shows his simple pleasure at being alive and makes me laugh for the same reason. He even thinks there are more bunnies in Fred’s future. And while he himself says his primary interest is in animal research at Texas A&M and that clinical work gets repetitive after a while, Long admits that “it’s an awful good feeling to see a patient go home with his tail wagging.”