Richard King and his wife, Henrietta, founded the King Ranch. Their daughter Alice and her husband, Robert Kleberg — shown with their children in the turn-of-the-century photograph at the right — founded the family that sustained it. When Henrietta King died in 1925, the ranch’s 1.2 million acres were divided among her heirs. Alice and Robert Kleberg ended up with more than 800,000 acres, which they and their children incorporated in 1934 as the King Ranch. The five children pledged to stay together for twenty years after the incorporation, but since then the descendants of two of them have left the ranch. The children and their descendants all played important roles in the history of the ranch. From left to right in the picture, the Kleberg children are:

Alice, who is the only survivor of the five and perhaps the most fiercely independent of the bunch. When the 1934 corporation dissolved in the fifties she was the only one to leave the ranch. Now 87, she and her children run a former division of the King Ranch called the Santa Fe Ranch, in Hidalgo County.

Sarah, who grew up a tomboy and wanted only to ranch. Her first husband, a cowboy, died shortly after the birth of their only child, Belton Kleberg “B” Johnson. Sarah’s second husband, a Kingsville doctor, also died after the birth of a son, Robert Richard “Bobby” Shelton. The two boys were raised by their aunt and uncle, Helen and Bob Kleberg. Both expected to take over the ranch after Bob’s death in 1974, but they both lost out, in turn, to Jim Clement. Today neither is with the ranch.

Henrietta, who in 1915 moved to New York with her first husband, later an executive with Celanese. When he died she married her neighbor Tom Armstrong and returned to the ranch. From 1955 to 1968 she was the chairman of the board. Her daughters, Ida Louise (“Illa”) and Henrietta (“Etta”), married two of the men who run the ranch today, Jim Clement and John Armstrong (Tom Armstrong’s nephew), now in their sixties.

Robert Justus, Jr., took over effective control of the ranch at 22 during World War I, when his father suffered a stroke and his older brother, Richard, was with the Army. For the next 56 years he ran the ranch. Using the oil wealth he had secured, Bob expanded the ranch to millions of acres around the world. His daughter, Helenita, has her own ranch in Virginia but still participates in the King Ranch’s management.

Richard, the oldest child, was a man of natural ability and grace, the favorite of his mother. He served in Congress, but on the ranch he deferred throughout his life to his younger brother, Bob. Richard’s son, Richard “Dick” Kleberg, Jr., became Bob’s key assistant and, shortly before his own death, threw his support to Jim Clement as Bob’s successor. Dick’s second son, Stephen Justus “Tio” Kleberg, is at 34 the senior male Kleberg on the ranch and manager of the Texas divisions.

No family stays as united as the Klebergs through five generations without strong traditions and some fresh blood. Robert Kleberg’s belief in the power of a unified family formed the framework, and his wife’s long devotion to that belief instilled it in their children. Their descendants have followed a similar pattern: the men run the ranch, the women keep the family together. Helen Kleberg, Bob’s wife, infused in the family a sense of pride in the important details of family life: the single-spaced printed sheets listing everyone’s birthday, the cards and letters on special occasions, the ceremonies that brought the family together. Mary Lewis Kleberg, Dick’s wife, took over this task when Helen died in 1963, assisted by Illa Clement and Etta Armstrong. The next generation of women is better educated and more interested in helping to manage the ranch, but they also run the summer camp that binds the family’s children to the ranch’s future.

The men who married into the family have always helped sustain it. Since the arrival of Robert Kleberg in 1881 the family has not hesitated to pass over the senior male in the bloodline if someone else, blood relation or in-law, was judged more capable of running the ranch. In fact, the senior male has never taken over the ranch, a striking departure from the traditions of most aristocracies. Since the death of Captain King, the ranch has been run by an in-law (Robert Kleberg, Sr.) in the second generation, a younger brother (Bob Kleberg) in the third, and an in-law (Jim Clement) in the fourth. Tio Kleberg, whose older brother prefers banking to ranching, may be the fifth generation’s continuation of that pattern. 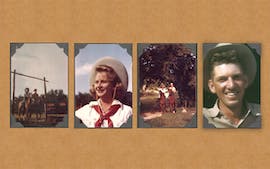