ERNEST WILLIS, DEATH ROW INMATE number 881, may soon be a free man. On July 21 federal district judge Royal Furgeson granted the 59-year-old convicted murderer his petition for writ of habeas corpus and ordered that he be released or granted a new trial. The decision paves the way for Willis to become the first death row inmate released in Texas since 1997.

I first wrote about Willis in December 2002 in “Death Isn’t Fair,” an article about the state’s capital punishment system. Every death row inmate has a story about how his attorney or the cops wronged him; few have one like this. Even though no physical evidence tied Willis to the crime and he had no violent criminal past, he was sentenced to death in 1987 for setting fire to a house in Iraan that killed two women. Prosecutors mocked him as a “satanic demon,” mostly because throughout the trial he sat in an expressionless daze, and his inexperienced lead lawyer was little help, rarely objecting to the prosecutors’ portrayal of Willis and declining to put any character witnesses on the stand during the trial’s punishment phase. Several years later an investigation by Willis’s appellate lawyers revealed that their client had unwittingly been given daily doses of powerful anti-psychotic drugs during his trial by someone working for the police or the prosecutors—which explained his bizarre countenance—and that a psychological report that said Willis presented no danger to society had been withheld by prosecutors.

Furgeson’s decision this summer was Willis’s last real hope. The writ of habeas corpus, also known as the Great Writ, is used to address issues of fundamental fairness and constitutional rights; every inmate gets to file two of them, one at the state level and one at the federal. The Texas Court of Criminal Appeals had already turned down Willis’ state petition, in 2000, and though most federal petitions are also turned down, Furgeson seemed genuinely outraged at the way Willis had been prosecuted. In a strongly worded eighty-page opinion, he wrote that “both his conviction and sentence were obtained in violation of the United States Constitution.” The order put the case in the hands of Texas attorney general Greg Abbott, whose office represents the state in the federal courts. Though the Texas AG has long taken a hard line with death penalty cases, on September 3 a representative told me that, after consulting with Ori White, the Pecos County district attorney, the office had declined to appeal Furgeson’s decision. That sent the case back to White, who has until November 18 to decide whether to pursue another trial or set Willis free. “I am concerned,” says White, who has hired a fire expert to go over all of the evidence and issue a report. “It’s not my job to convict those who are not guilty. We are starting from square one in this case, and we fully intend to do justice.”

Willis, who declined to be interviewed for this story on the advice of his attorneys, will not be waiting alone for White’s decision, at least not in spirit. In 2000 he married Verilyn Harbin, the sister of Ricky McGinn, a death row friend of Willis’s. She had started writing to Willis in 1998, and after three months of letters, she visited. “There was something, and it’s hard to put your finger on,” she remembers. “Something in the chemistry.” McGinn was executed in September 2000, and his sister and Willis married one month later, with one of her other brothers standing in for Willis as a proxy. They have yet to even touch each other. “Someone said, ‘You’ve never even been with him,’ but I tell them, ‘You don’t have to sleep with someone to know you love him,'” she says. “And I love that guy dearly.”

Willis has been in prison since he was 41. His back, which was bad then (he’d had surgery four times before he was arrested), is worse now. When and if he does get out, one of his first trips will be to a doctor. Then, says his wife, “We’ve got two or three places in mind, but we’re not going to say where we’re going. We will not stay in Texas.”

She is hopeful, and so is her husband, though after eighteen years she says he is realistic: “He says he’ll believe it when he walks out that gate.”

How Prison Art From Texas Captured the Art World’s Attention 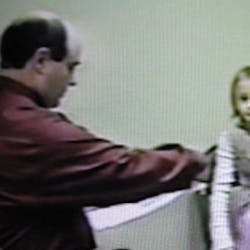