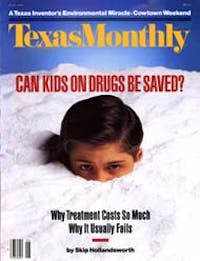 So here I am, nearly 143 feet in the air, close to the top of Six Flags Over Texas’ new roller coaster, the so-called “tallest wooden roller-coaster structure in the world,” preparing myself for the plunge of a lifetime, and the guy beside me in the little coaster car looks out in the distance and says, “Hey, you can see my apartment from here.”

“Yeah,” says the man, thirty-year-old Gary Slade, the regional representative of the American Coaster Enthusiasts and the roller coaster columnist for an international amusement-park newsletter. “I have an apartment within walking distance of Six Flags.”

We are almost at the top of the Texas Giant, the click-click of the coaster wheels has come to a near-stop, and I know we’re about to drop 137 feet straight down, like sinners headed to a fiery hell. Although this is an enormous moment for me—a chance to experience absolute fear—I keep looking curiously at this reedy Slade fellow.

“You see,” says Slade, apparently unaware that our lives are on the line, “if my car breaks down, I can walk over here and still get in a daily roller coaster ride.”

Whoomp! The train goes down, and the insides of my body start to come out of my ears. My eyes press back into my skull. My cheeks are somewhere down around my neck. In short, I look like Dennis Hopper on a normal day.

“A fifty-three-degree angle,” Slade yells back.

Now think of this. I am supposed to be scared out of my wits. It is a feeling I prefer to experience on a roller coaster because it is perhaps the only place on Earth—next to an afternoon on my couch, watching back-to-back Phil Donahue shows—where I can feel close to death but don’t actually die. And here I find myself beside a man who treats a roller coaster ride as a play-by-play event.

“We’re at sixty-two miles per hour,” Slade cries, “and now watch this left-hand fan curve.” Astonished, I watch Gary Slade more than I do the hurtling tracks in front of me. He has this look of wonder in his eyes, like the way Marla Maples looks at her Donald. “Here’s the curving double-up,” Slade continues, “and here’s a trim brake. A drop S. An oval helix around the lift hill. Watch this: a sixty-degree bank!”

If you think roller coasters are bizarre, then you haven’t met the roller coaster enthusiast. This month, the annual convention of the American Coaster Enthusiasts, of which there are 2,800 members, meets in Arlington to ride the Texas Giant. Six Flags originally billed the Texas Giant, which opened in March, as the world’s largest wooden roller coaster. The structure contains more than 900,000 feet of lumber, enough wood to build the frames of more than thirty three-bedroom homes. But the Dorney Park and Wildwater Kingdom in Allentown, Pennsylvania, promptly filed suit against Six Flags, claiming it had the tallest coaster. In April a U.S. district judge ruled that the two coasters tied for the honors. But as far as thrills go, “the Texas Giant is ten times better than the best,” says Slade, a service-department supervisor for a Dallas publishing company when he’s not riding roller coasters—and he’s ridden 150 of them in the United States and Canada.

Slade is utterly obsessed with the rides. His annual vacations consist of trips to parks with roller coasters, and he takes regular weekend trips to Houston and Amarillo to ride their roller coasters. And then there is Six Flags. When we rode the Texas Giant together, the week before it officially opened to the public, he had already ridden it forty times in test rides.

When I ask him why he likes roller coasters, he goes into his speech about history and tradition and speed and curves and whatnot. His speech lasts nearly as long as a single trip on the Texas Giant, which is a little over two minutes. And that still doesn’t explain why he wants to get on one of those things time after time.

“Okay, coming to the S curve!” he shouts as we near the end of our ride. There’s another drop, another whip to the left, then to the right, and suddenly I’m screaming again. “The last thousand feet are the best!” Slade announces.

“Yaaah!” I keep screaming as the train comes to a stop. My pulse is weak, my nostrils are flaring, and my fingernails are clawing at the padding in front of me.

Slade is staring at me benevolently, like a wise old man who has taught his son to shoot his first deer.

“See, I knew you’d find it a beautiful experience,” he says. “You want to ride it again?”