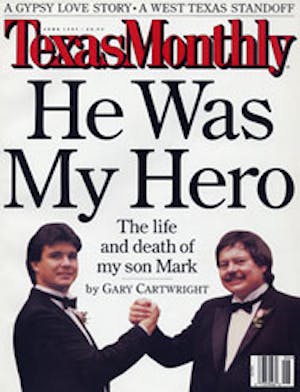 I SUPPOSE YOU WOULD CLASSIFY my late husband, Gordon, as an Old Aggie [“Did You Hear the One About the New Aggies?” by Paul Burka, April 1997]. Indeed, he did everything he could to prevent women from attending A&M, including sending a letter to Governor John Connally. He still had the February 1992 issue of Texas Monthly, in which you quoted from a letter he sent that is now in the school archives. It stated that women at A&M would have the same effect as Eve in the Garden of Eden. Eventually, he capitulated and was pleased when one of our granddaughters enrolled there. Our two sons would be considered New Aggies, as women at A&M were no problem to them. Long live the Old Aggies.
Mildred Wisenbaker
DeRidder, Louisiana

I’M SURE YOUR APRIL issue sold a record number of copies in College Station. We certainly salute the progress at Texas A&M described in Mr. Burka’s article, and if his son chooses to be an Aggie, we know he will have the opportunity to receive an excellent education. However, according to every objective measure in the academic world, of which there are many, UT is the highest ranking public university in Texas. And among Texas institutions, only UT and Rice have been invited to join the prestigious Association of American Universities, which represents the leading research universities in the nation. But as I stated in a recent press conference, there are many challenges facing higher education in Texas today. Your readers might have been better informed if the magazine had chosen to examine the real issues confronting higher education in our state instead of focusing on tired old rivalries.
Robert M. Berdahl
President University of Texas at Austin

MR. BURKA MADE A SMALL yet critical error. He says, “UT, in the discourse of the day, was ‘The University,’ which Aggies derisively shortened to T.U.—a designation that survives in College Station to this day.” The proper term is “t.u.,” with the case of the letters being quite significant.
Greg Judkins
Houston

There Is A Saying At A&M, “Aggieland, from the inside looking out, you cannot explain it, and from the outside looking in, you cannot understand it.” To describe to a non-Aggie the meaning of such time-honored traditions as Muster, Silver Taps, the 12th Man, Bonfire, Midnight Yell Practice, and many others is next to impossible. However, Mr. Burka’s assessment of A&M’s intangibles (“the other education”) was extremely perceptive. Although A&M has had its share of lows, as well as its highs and its former students have not always agreed on specific issues, the love and loyalty to A&M have prevailed to bring the school to its present level.
E. Gordon Gregg
Austin

MR. BURKA FAILS TO MENTION another positive aspect of the new A&M—its major commitment toward cultural diversity among the student body. A&M not only aggressively recruits minority students, it also goes out of its way to make them feel like part of the Aggie family once they attend.
Hugo Rodriguez
Brownsville

THERE IS ONE THING I would change about the article. I would put a picture of a young lady who had received her degree from A&M on the cover since it was opening the school to women that saved it.
Helen Chapman Williamson
Carthage

EVERYONE KNOWS THAT ADDRESS labels on magazine covers are problems in that they may obscure interesting parts of the cover. There is, however, an even larger problem with the address label on my April issue. The label is too small. It would be better if it was large enough to completely obscure the entire cover, Aggie and all.
Charles H. Moerbe
Spring

YOU WILL SELL LOTS OF MAGAZINES because the cover and story are sensational; we all know that. We also know that a story on the continued excellence of UT as the state’s premier university would not sell many magazines because it is common knowledge. We now know where your ethics lie. Welcome to the world of the National Enquirer, the Weekly World News, and Texas Monthly. Elvis has been sighted, a baby was born with six heads, and Texas A&M is better than Texas.
Benson Latham
Amarillo

ONE HAS TO BE IMPRESSED with the wit of the April cover story—surely that was the funniest April Fools’ joke I’ve ever come across.
Brian P. Kagy
Austin

HAS UT GOTTEN FAT AND LAZY? U.S. News and World Report ranks Texas as a second-tier school.  Texas Monthly holds a lovefest for A&M, giving it the cover and proclaiming it the best public school in Texas. Texas loses its two highest-ranking administrators. The Austin American-Statesman runs an article trumpeting the fact that out-of-state schools are stealing away qualified minority students from UT. We can’t sit around, feel smug, tell Aggie jokes, and assure ourselves that we are better than A&M. We need to get off our duffs, spread the word about UT’s education, and give (not just cash).
Andrew Blake Piel
Austin Family Values

YOU MAY NOT REALIZE that there are several million Texans who could not care less about the “rivalry” between Austin and Dallas [“Babes in the ’Hoods,” by Skip Hollandsworth, April 1997]. In fact, I’ll bet most of us who live elsewhere find the prevailing attitudes of many residents in both cities rather intolerable. Cynthia J. Reynolds San Antonio

CONGRATS TO BOTH SKIP HOLLANDSWORTH and Evan Smith on the births of their beautiful daughters, and bravo to Skip for his hilarious yet insightful article. As a native Austinite, I laughed so hard I cried. Why? Because it’s so true. I hope he will do a follow-up piece in ten years. I’m willing to bet he’ll find Tyler summering at Camp Waldemar while Carson is hanging at Barton Springs pool.
Jan Combs
Austin

PAUL BURKA’S ARTICLE about the unethical practices of a few at A&M are on target [Behind the Lines: “Not Guilty,” April 1997]. Those in power should be held accountable for their actions. With all that A&M has going for it that is created by the undeniable and undefeatable “Spirit of Aggieland,” careful guard must be given to that spirit.
John Patrick Collins
Irving

I WAS PLEASED TO READ a well-thought-out article regarding the public’s view of appropriate conduct of elected and appointed officials. I think the public attaches a sense of well-being to the condemnation of officeholders, be they fellow party members or of the opposition.
E.C. Muehleisen
email witheld

MR. BURKA IS TOO VALUABLE to merely be the executive editor of Texas Monthly. I am sure there is a place for him in the Clinton White House.
Seth Parker
San Antonio