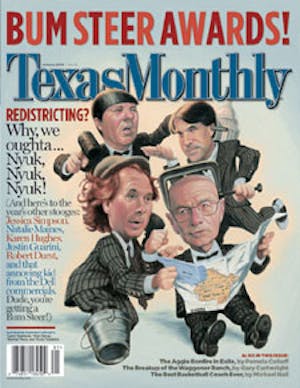 texasmonthly.com: Had you ever been to College Station, specifically, A&M, before you began working on this story? If so, was it any different than your previous visit? If not, what were you expecting? Were your expectations met?

Pamela Colloff: I had been to the A&M campus before, and I had read a lot about the university before I started working on the story. But as someone who lives close to the University of Texas campus in Austin, I’m always struck by how different the two campuses are. At A&M, chivalry is alive and well. I don’t think I opened a door the entire time I was on campus.

texasmonthly.com: What were your first impressions of the campus and the students?

PC: On this trip, I was struck by how much Aggies looked like students at any other college. Very few Aggies are still in the corps of cadets, for example. The typical A&M student who I saw walking across campus wore flip-flops and was constantly talking on a cell phone.

texasmonthly.com: Do you think A&M is losing its spirit because of what happened at Bonfire? Or do you think college kids just aren’t as interested as they used to be?

PC: I think it’s a combination of both. Women weren’t really allowed to work on Bonfire until the late seventies, because there weren’t enough male students to help out. So maybe interest in Bonfire was slowly waning as fewer students joined the corps.

PC: I had no idea just how much work was involved in building the bonfire. Students don’t believe in breaking with tradition, so they chop every tree down with an axe, which takes an enormous amount of time. If they used chainsaws, it wouldn’t be so time-intensive, but that would also break with tradition.

texasmonthly.com: Were you surprised by anything?

PC: I was surprised by how quickly everyone left after the bonfire was set ablaze. After it was lit, spectators did fifteen minutes of yells, and then about 75 percent of them left. I was really surprised by that. I had expected everyone to stay at least long enough to see whether it burned past midnight, which, according to tradition, means that A&M will beat UT.

texasmonthly.com: Do you think the bonfire will ever be a university-sponsored event again? Why or why not?

PC: I really don’t think the bonfire will ever be sponsored by A&M again. Legally, I think it would be too big of a liability for a public university to take on. But that’s just a guess.

texasmonthly.com: What was the most difficult aspect of working on this story? Why?

PC: It’s always difficult to see the pain of parents who have lost a child. Many of the parents whose children died in Bonfire were at the memorial that I attended, and it was hard seeing them still suffering with those memories.

texasmonthly.com: Did you participate in any of the bonfire building activities? If so, what?

PC: No. I just watched. That is hard, hard work!