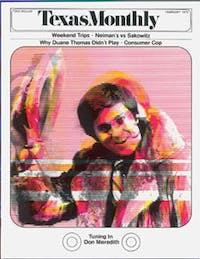 THEY DID IT TO ME again.

Yesterday I bought my number one customer 500 shares of Continental Airlines at 231/4. The Dow-Jones was crossing 1,000, the airlines were strong and it looked like a good trade. Today the New York Stock Exchange delayed the opening of Continental Airlines due to an influx of orders. There’s no way to know whether the orders are to buy or sell.

I scanned the broad tape to discover the news item on Continental: third quarter earnings for Bob Six’s airline weren’t what Wall Street had been expecting. About mid-session Continental Airlines reopens at 20, down three and one-quarter points from the previous close. The stock can’t even bounce a little. It closes at 191/4.

I have just been airpocketed for a cool 17 per cent in one 24-hour period. And they did it to me. In today’s market, many glamour stocks have charts resembling the profile of a cliff. Even staid old investment grade vehicles aren’t immune. At one point the New York Stock Exchange stopped trading in Texaco, then reopened it down a couple of points, clipping in just two days almost ten per cent of the market value from that venerable number.

Brokers call such a sharp decline an air pocket because it resembles an old-time DC-3 encountering an extreme downdraft that puts passengers’ hats in the air and hearts in their throats.

Some other notable air pockets: Handleman’s stops trading one day at 213/8. It opens the next day at 101/2.

Levitz Furniture halts at 47, reopens at 30.

Air pockets arrived with the advent of institutional influence in the stock market. The they I’ve referred to are the portfolio managers of institutionalized money. Gunslingers at mutual funds. Aggressive bank trust officers. Pension and profit-sharing plan investment committees. Nervous Nellie investment advisers. They.

Although individual investors still own about 65 per cent of all common stocks in the United States, institutional trading accounts for about 65 per cent of all the shares changing hands on the New York Stock Exchange. They are trading theirs about twice as fast as we are trading ours. What they do with their stocks is a lot more important in the current stock market than what individuals do with theirs. Institutional ardor can keep a Potheirs. Institutional ardor can keep Polaroid selling at more than 40 times earned less per share in that year than it did in 1966. Institutional disenchantment can take Levitz Furniture from over $60 per share to below $20 per share in a few months although earnings continued to leap ahead.

My little air pocket in Continental Airlines might have been anticipated since institutional money managers seem to love the airlines ardently or hate them passionately, according to the season. Airlines are cyclical and highly leveraged. Institutional ownership of the seven major airlines ranged above 40 per cent in 1967 when the shares were selling at stratospheric prices. By 1970 when the shares had plunged to the depths, institutional sponsorship was almost nonexistent. Those institutions that owned airline shares didn’t like to admit it.

In 1972 the institutions bid airline shares up to unreasonable prices again, forecasting earnings that could only come sometime in the distant, murky future. The slightest disappointment from too exuberant forecasts of earnings created instant air pockets in the airlines.

I’ve got an idea how the air pocket in Continental developed. Joe Hotshot, head gunslinger at Inandout Hedge Fund, is talking to his friend Warren Upright, portfolio manager in the trust department of the First Cloaked in Secrecy National Bank:

“Warren, I hear the third quarter for Continental Airlines was disappointing.”

“I hear the same thing, Joe, but you can’t expect a smooth ride in a highly leveraged industry like the airlines.”

“I didn’t mean I’d be a seller, Warren. I’m still very keen on the industry in general and Continental in particular.”

“The bitter with the sweet, Joe. I certainly don’t intend to sell the 30,000 shares of Continental we have in this trust department.”

“Nor me, Warren. In fact, I’d be a buyer if there’s much weakness.”

“Good thinking, Joe. Will I see you at the institutional seminar on gold stocks Friday?”

“Wouldn’t miss it for the world, Warren. See you there.”

They hang up their phones and immediately call some broker and tell him to dump all their Continental Airlines holdings at the market. Their shares and the thousands coming from other institutions overwhelm what buying interest there is in the stock. Bingo, an air pocket.

Since most of the trading on the New York Stock Exchange these days involves institutions, chances are that many of the buyers at the bottom of the air pocket are also institutions. Thus, truth in advertising:

“Hello, L. A. Everyone in New York and Chicago is selling. Buy!”

But defining and discussing air pockets are not the most important considerations for individual investors. They just want to avoid them. I’m convinced there’s no such thing as a perfect defense. Perhaps the best rule is to avoid those stocks in which the institutions are heavily invested. I’ve adopted a simple guideline. If institutional ownership of a stock exceeds 15 per cent of the shares outstanding, I go elsewhere.

Information on the percentage of institutional ownership of a particular stock is available from several sources. Your friendly stockbroker will be happy to get it for you. If he asks you why you want to know what percentage of the capitalization of a stock the institutions own, just tell him, “In a dog-eat-dog market, Charlie, my boy, it’s us against they.“