Andy Roddick decided to end his career on his own terms, announcing at a surprise press conference on his thirtieth birthday Thursday night that this U.S. Open would be his last tournament.

“I’ll make this short and sweet. I’ve decided that this is going to be my last tournament,” Roddick said at the start of his press conference, his voice free of emotion. “I don’t know if I’m healthy enough or committed enough to continue another year.” (Roddick has been beset by various injuries in recent years.)

“If I’m being honest, I would have bet against myself on getting through this without tears today. I must have already gotten them out earlier. This has been a huge part of my life always. But I don’t know that it’s always been my entire life. I do feel very confident in the things and the people that I have to fall back on,” he continued.

At Sports Illustrated, Bruce Jenkins praised Roddick for his graceful goodbye, which has him leaving in “a swirl of universal admiration.” Roddick “isn’t leaving the game too soon, nor does anyone feel he stuck around too long. Rare is the world-class athlete who makes such a clean, flawless exit,” he wrote.

And what, according to Jenkins, will Roddick be remembered for?

He’ll go down as the leading American player of his generation, a distinction reserved strictly for the greats. It won’t be any particular shot or stylistic impression that marks his legacy, nor will a Grand Slam history that records just a single major title. What people will remember most about Roddick, I’d surmise, is his indomitable spirit.

What Roddick’s legacy in the sport will be depends whether his career is viewed in comparison to some of the other greats of his era or on its own merit.

On the one hand, he used his powerful serve and potent forehand to remain a decade-long fixture in the top 10 and keep the U.S. relevant in men’s tennis. On the other hand, he never could unequivocally say he was the best in his sport, always overshadowed by Roger Federer in his prime and eclipsed by the likes of Rafael Nadal, Novak Djokovic and Andy Murray in recent years.

Roddick, the last American man to win a Grand Slam, is currently ranked number 22 in the world. He attained the number-one ranking in 2003, the year he won the U.S. Open, his sole Grand Slam victory out of his 32 career titles.

But at ESPN, Johnette Howard cautioned critics not to view Roddick as a “one-Slam wonder.” “That’s never been fair,” she wrote:

He didn’t settle for just re-inventing himself once. He doggedly kept at it again and again. And there’s no shame at all in the fact that no matter how admirably Roddick worked at it — dropping weight, changing coaches, improving his foot speed and volleys so he could rely less on his 135 mph serves or sledgehammer forehands — first Federer, then Rafael Nadal, then Novak Djokovic all came along and surpassed Roddick anyway.

And still Roddick never called off the chase. Not until Thursday.

Howard praised Roddick for his grace and thoughtfulness: “He’s been both admirably serious about his craft and hysterically funny, deeply patriotic when the U.S. Davis Cup team called and yet generous and respectful toward his fellow players no matter where they came from.”

And when asked at Thursday’s press conference “how it felt to be ‘the face of American tennis’ all these years — meaning the standardbearer who not only had the challenge of trying to hurdle Federer but of following a countryman as great as Sampras — and Roddick quickly answered, ‘It’s been a pleasure,'” Howard wrote. “But that was typical Roddick, underselling himself again. The pleasure was ours.”

Roddick, who beat fellow American 21-year-old Rhyne Williams in three sets in his first round match on Tuesday, is set to play Australia’s Bernard Tomic on Friday.

In Tuesday’s Austin American-Statesman, Michael Barnes reported on the Andy Roddick Foundation’s tennis and learning center under construction in East Austin. The facility will feature eight tennis courts and a 10,600-square-foot building, and it will host an after-school tennis program when it opens in 2013.

“I’ve surely realized that my tennis career won’t last forever,” Roddick told Barnes. “And the opportunity to create something positive and lasting in Austin is very important to me. … My perfect scenario is that kids 10 years from now won’t know that I ever played tennis but will be positively affected by this program we are starting now.” 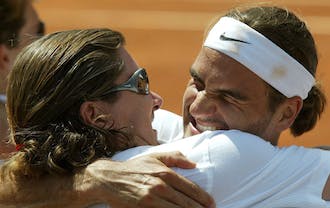