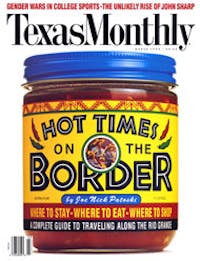 “I should probably have been a wiser and better informed man,” opined J. Frank Dobie in 1942, “had I spent more time out with the grasshoppers, horned toads, and coyotes.” Texas’ writer emeritus—who wrote entire volumes on mustangs, Longhorns, and other creatures—knew that the link between animal and writer was perfectly, well, natural. A similar faunal fondness seized many writers, from Frederick law Olmsted, who noted whitetails, whooping cranes, and more in his 1857 travelog, to Larry McMurtry, who created a memorable duel between a bull and a bear in Lonesome Dove. As we celebrate Texas Writers’ Month, we offer a tribute to the state’s fanged, feathered, and fur-bearing icons. From eight of the world’s most acclaimed illustrators, we commissioned eye-catching portraits of these animal muses, which we then paired with pertinent quotes from our native literati. For the beastly results, read on.

ROADRUNNER
(Illustration by Braldt Bralds is not available online.)
The road runner, a good wild plain bird, could be seen running up and down the roads of the valley, shy and alone and ugly…perking up a knotty little head with goggle-eyes in it, a plucked-looking and ragged long tail at the end of him, and running on strong foolish slew-feet. He could run all the long roads of the world, he was so strong and tireless.
William Goyen
“The Road Runner in Woolworth’s,”
Selected Writings of William Goyen (1974)

COYOTE
(Illustration by John Collier is not available online.)
The wolves we Texans hunt aren’t really wolves at all—just coyotes. There are a few big lobos in the state, but not many, nothing like the bountiful supply of coyotes which slink over the southern and western lands. If you are out hunting without dogs, say stalking deer, you seldom jump a coyote. But if you look over your shoulder occasionally, you’ll probably see one crossing your trail behind you, and he’ll be the guiltiest looking fellow you ever saw.
George Sessions Perry
Texas: A World in Itself (1942)

MOUNTAIN LION and RATTLESNAKE
(Illustration by Brad Holland is not available online.)
The first thing Bill knowed, his hoss stumps his toe on a mountain and breaks his fool neck rollin’ down the side, and so Bill finds his self afoot.

He takes off his saddle and goes walkin’ on, packin’ it, till all at once he comes to a big rattlesnake. He was twelve feet long and had fangs like the tushes of a javelina; and he rears up and sings at Bill and sticks out his tongue like he was lookin’ for a scrap. There wasn’t nothin’ that Bill wouldn’t fight, and he always fought fair; and jest to be shore that rattlesnake had a fair show and couldn’t claim he took advantage of him, Bill let him have three bites before he begun. Then he jest naturally lit into that reptile and mortally flailed the stuffin’ out of him. Bill was always quick to forgive, though, and let by-gones be by-gones, and when the snake give up, Bill took him up and curled him around his neck, and picked up his saddle and outfit and went on his way.

As he was goin’ along through a canyon, all at once a big mountain lion jumped off of a cliff and spraddled out all over Bill. Bill never got excited. He jest took his time and laid down his saddle and his snake, and then he turned loose on that cougar. Well, sir, the hair flew so it rose up like a cloud and the jackrabbits and road-runners thought it was sundown. It wasn’t long till that cougar had jest all he could stand, and he begun to lick Bill’s hand and cry like a kitten.

Well, Bill jest ears him down and slips his bridle on his head, throws on the saddle and cinches her tight, and mounts the beast. Well, that car jest tears out across the mountains and canyons with Bill on his back a-spurrin’ him in the shoulders and quirtin’ him down the flank with the rattlesnake.

And that’s the way Bill rode into the camp…Then he turned to the men and said, “Who in the hell is boss around here, anyway?”

“I was,” says a big stout feller about seven feet tall, “but you are now, stranger.”
Mody C. Boatright
“The Adventures of Pecos Bill,”
Tall Tales from Texas (1943)

JAVELINA
(Illustration by Marshall Arisman is not available online.)
Gideon saw few buffalo beyond the head of the Middle Concho, and he reasoned that those few he saw were lost. This land seemed better suited to the stiff-bristled, belligerent little wild hog known as the javelina, whose sharp tusks could take off half a man’s hand if he were foolish enough to offer it. A trooper named Davis shot one but tried to claim possession before it had finished its dying. He lost all of one finger and part of another. None of the soldiers would eat the pig because it had fed on human flesh.

Maloney found it delicious.
Elmer Kelton
The Wolf and the Buffalo (1980)

ARMADILLO
(Illustration by Milton Glaser is not available online.)
Like most animals equipped by evolution with extra protection, they seem to have rather dim brains and their eyes and ears are not alert to danger. With a small amount of stealth you can sneak up on one where he roots and grab him. He will then give one huge vertical leap designed to tear himself loose from your grip, which it most often does (it is rough on armadillos, that habit, when cars pass over them on roads), and will bound away grotesquely toward his nearest hole or a brushpile, uttering as he goes a long complaining growl that is one of nature’s most peevish and disgruntled sounds.

PRAIRIE DOG
(Illustration by Sandra Hendler is not available online.)
Comically humanlike, two or three of the creatures would collect on the front stoop of one of their neighbors’ houses and gossip, their heads bobbing in solemn agreement, jerking up all together at anything untoward happening down the street. Now and again a spat would develop among their children and with a burst of yelps they would break off and dash over and separate them and box their ears. Sometimes a truant youngun would scamper down the block for home ahead of a scolding mother. Others meanwhile appeared repeatedly at their holes like an industrious housewife coming out to the front porch to shake out her dust cloth or her mop.
William Humphrey
The Ordways (1965)

JACKRABBIT
(Illustration by Bill Mayer is not available online.)
She started up presently at seeing a long, gray furred creature go leaping across the sand like a kangaroo.

“Nothin’ but a jack rabbit. You’ll see thousands of ‘em round here.”

She had never seen a rabbit of such enormous size. Did the animals thrive on western air, or did the atmosphere magnify their size so that they only looked bigger?
Dorothy Scarborough
The Wind (1952)