We publish reader letters in every issue of Texas Monthly. Below is feedback for our February 2019 collector’s issue. Have something to tell us? You can write to us here.

The February issue [“Love Letters to Texas,” Special Collector’s Issue] had a double whammy for me: “Tex-Mex 101” [August 2003] and “Conversations With a Grasshopper” [March 2004]. The food described by Patricia Sharpe is exactly what I have been trying to explain to the many misguided people who think queso is a gourmet dish unto itself and deep-fried chipotle-flavored asparagus is a delicacy. Additionally, S. C. Gwynne’s beautifully worded article on being alone in Big Bend was a pleasure to read. Thank you to both.
Kay McBrayer, San Marcos

Loved your story on Tex-Mex. Do you remember Casita Jorges, which I guess has morphed into [Austin Tex-Mex chain] Maudie’s? I went to the University of Texas from 1976 to 1979 and started out with Jorge in his first small place on East Sixth, when he was in the kitchen. He was a terrific guy, and we became friends. I was from Pittsburgh, and he loved that, and when I came into his place he would yell out in his accent, “Hey, Peetsbugh! Come eat!” He invited me over to his family’s home for certain holidays, and it was lovely. That was how I, being from the North, learned about Tex-Mex, chili on the enchiladas, queso, and no cilantro! When I graduated and moved to New York City in 1979, I would call him and he would freeze some of his food and FedEx it to me! I was in Austin recently for the first time in a long time and went to Maudie’s and had those enchiladas, which they do credit to him, and it almost made me cry with memory and delight!
Joel Peresman, New York

No doubt I am late to the party, but I just wanted to add my thanks to others you have surely received for your inclusion of “The Will of God” [December 2015] in February’s issue of some of your greatest hits. John Spong’s fine tribute to his father is the only article I have ever clipped and saved from Texas Monthly in over twenty years of reading it, and it was great to see it included in full.
Margaret Rogers, Dallas

Regarding Anne Dingus’s “Colorful Texas Sayings” [December 1994]: I have a list of sayings that I have collected through the years, and after reading the many listed in the February issue, I am going to add to my list. I might add my personal favorites. Charity: “Don’t thump a free melon.” Sloth: “Poor planning on your part doesn’t make it an emergency on my part.”
Tony Willis, Texas City

When I think about all the things I truly love about Texas, there y’all are, hangin’ like a hair in a biscuit.
Joe Kimbrough, Austin

Editors’ note: Upon receipt of Kimbrough’s letter, the editorial department wrestled with the true meaning of “Hangin’ like a hair in a biscuit.” “He really doesn’t like us,” opined one editor. Said another, “Maybe he meant to say, ‘There y’all are, hangin’ on like a hair on a biscuit.’ In other words, ‘Stay the course!’ ” Even a fact-checker couldn’t crack the code: “The further down this hole I go, the less I know.” In the end, we returned to the source. Says Kimbrough: “Apologies to those it may have offended, but rest assured it was meant as a sincere compliment, akin to determination or tenacity. In a more literal sense, the question as to whether it would even be a problem is directly related to how good the biscuit is. No sense wastin’ a good biscuit.” 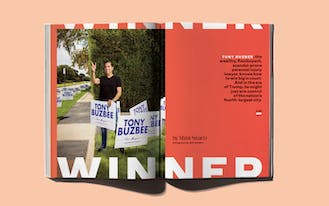