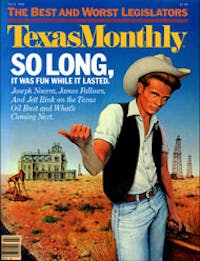 The great wildcatter is back again, to answer the tough questions.

I got into the oil business a couple of years ago and made a lot of money. Now I’m afraid to answer the telephone because it might be my banker. Frankly, Jett, I’m broke. What happened?

If you’re asking that question, no wonder you’re broke. Just because you’re a free enterpriser don’t mean you shouldn’t hedge your bets. The reason you went broke ain’t the government and it ain’t the Arabs. And it ain’t the major oil companies either. You went broke for the same reason you got rich—supply and demand. Used to be there was a short supply and people would pay whatever the Arabs wanted. That flushed out new supplies OPEC couldn’t control—British North Sea oil, oil from Iran, oil from all kinds of pissants getting into the business. Then, because the price was so high, Americans started using less gas, God love ‘em. So today 20 per cent of our oil is imported where it used to be 40 per cent. You’ve got greater supply, less demand, and to this son of Adam that means the price is going down. That’s free enterprise, buddy. So stop crying. Anyone can be a free enterpriser when the price is going up. It takes a tough old horny toad like me to be a free enterpriser when it’s going down.

I remember Houston ten years ago when oil was $3.50 a barrel. It was a nice town. I mean a really nice town. Today everybody says Houston’s going to be a ghost town if oil goes below $20. How can that be?

Well, I had a lot more gas in my engine back then too, so I know what you mean. But yesterday’s gone. Here’s what happened. Let’s say you’re a geologist making fifty thou. You’ve got a nice house, you like it, you’re happy. Then the boom hits. You switch to a new company, and all of a sudden you’re making $150,000 and you own $10 million in company stock. Well, you think, maybe a bigger house would be nice. Costs $600,000, but that’s all right. And what about a condo down on South Padre? Why not? You move in, you like it, life is good. At the same time, your company’s doing the very same thing. It’s buying offices, rigs, leases, whatever, with money it’s borrowed and can pay back as long as oil is at $34. But the price goes down; your company can’t make the payments on all those offices, rigs, leases, whatever, so it cuts back, and now you’ve got a problem. Your salary is down to $75,000 and your stock’s worth cow plop. You’ve got to move out of that big house. You’re still making more money than you were, but are you happy about it? That’s what’s happening all over Houston—hell, all over Texas—and that’s why there are plenty of long faces even though the price of oil is still about eight times what it was ten years ago.

I just got laid off by a parts factory in Detroit. Should I move to Texas to get into the oil business?

Not now. You’ve waited too long. The roughneck jobs are taken, what ones are left. But don’t give up. If things pick up, get in on the beginning and learn the ropes. Maybe you’ll end up a rich old cuss like me.

I am a 26-year-old blonde who is a sole proprietor in the discreet entertainment industry. Most of my clients are oilmen, but with the bust I’m starting to wonder. Should I seek wider contacts, perhaps among gentlemen in the high-tech sector, in order to diversify my income?

If you’re asking, one free enterpriser to another, should you expand your markets, the answer is hell yeah you should expand your markets. Texas should do the same thing whether oil is at $100 or cow plop. But if you’re asking should you give up on your present oil-related customers or give up on finding new oil-related customers in the future, the answer is hell no. Right now is a great time to be in the oil business, especially if you don’t have debt. There’s all that drilling equipment lying around nobody’s using, all those moud companies and service companies crying for work, and the price of leases is getting back to within reason. And that all means that the cost of finding oil today is about $13. Now I never went to any peckerwood fancy teasip college, but I’m just barely smart enough to make money with something I can find for $13 and sell for $29. If I can figure that out, you know a lot of other red-blooded American males can too, and when they do, Heart of Gold, you’re not going to be dining out on hamburger.

I’ve got a good job as a computer programmer at Texas Instruments. Why should I care if some oilmen go broke?

Laughing Up My Sleeve

Other than the natural sympathy all humans have for the plight of other humans, you don’t have to care diddly. That’s the plain truth of the matter. Of course, it’s more fun for everyone when the economy’s booming: better jobs all around, your house is worth more, and you can sell it if you want to. The new buildings going up tend to be nicer, the local governments get some more taxes, so maybe the streets are a little cleaner and the garbage gets hauled away. But if you don’t care, you don’t care. That’s your business. All I’d say is, at least be consistent. If you don’t care when we oilmen are on the way down, then leave us alone when we’re on the way up.

Why should I tell you?