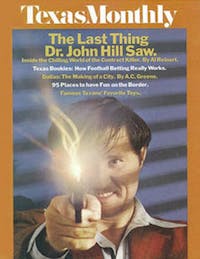 GOOD REPORTING SOMETIMES INVOLVES RISKS. Most people see the world outside their immediate vision through the eyes of the media, and much of the world contains people and situations that are unpleasant, distasteful, and downright dangerous. Wars fit in this category. So do murders. Becoming intimately involved in either can place the reporter in real physical danger. The nature of the profession, however, requires his becoming intimately involved.

AL REINERT SPENT SEVERAL MONTHS this summer waiting to hear from a contract killer. He had put the word out through bartenders and other anonymous channels, never really being sure that anything would come of it, always keeping the thought in the back of his head that such people might really exist, but, well, they weren’t real. They are. Not only are they real, they are ordinary—ordinary, church-going, good-citizen, family men, products of our educational system and our society, settled into suburban homes with mortgages to pay and lawns to water and keep trimmed. When Reinert came back from his interview, I asked him what the hit man had looked like. “Well, honestly,” AI said, “he looked like a dentist.”

Whatever you do, I had told Reinert after he called me one night saying he had spoken to a hit man on the phone, whatever you do, meet him during the day at a well-Iit, public place. Naturally, AI ended up meeting him at midnight in a hotel room. Alone.

“It was scary at first,” AI told me. “But after he put away his 12-gauge and we got to talking I began to relax. We talked for a couple of hours and it went just fine. About halfway through the interview I realized, Jesus, I forgot the money.”

“You forgot the money?”

“Yeah, but he was real nice about it.”

“I went and got it. What’d you think? I didn’t get it back until about 4 a.m. But guys like him don’t usually worry about people not paying off or checks bouncing. You know what I mean?”

Paul (the hit man) told AI that business was booming, that about twenty-five (25!) “professional” hit men work Texas, and that the market is being deluged by lower-priced, part-time hit men (“punks,” Paul calls them) taking advantage of the increase in demand.

AI recounts how Paul insists he has no remorse and no guilt. “He says he just sees it as a business. He sees himself as a businessman practicing free enterprise. I’m not so sure. He claims he has no conscience a few times too many to be really believed.”

Amid these delusions and warped values one fact stands out. AI did get a great story, but there is a story he didn’t get, a story that is practically impossible to write but which is there, lingering in the background. That story is about who hires Paul and his colleagues, what upstanding and not-so-upstanding citizens have paid large sums of money to eliminate business rivals, relatives, spouses, or inconvenient partners. These people keep Paul in business, and so long as they are willing to employ him, he will keep plying his dismal trade.

And all of us will have to live with a little more fear.

A. C. GREENE, AUTHOR OF the book Dallas: The Deciding Years—A Historical Portrait, from which “Why Dallas?” (page 54) is excerpted, has been playing Socratic gadfly in Dallas for 14 years. A. C. held Dallas up for examination in the pages of The Dallas Times Herald until its sale to the Los Angeles Times in 1970 and later as a member of Channel 13’s original newsroom staff. Since then he has published several books, one of which, The Santa Claus Bank Robbery, is being made into a movie. A. C. is a rare man, a man fiercely loyal to Dallas and equally dedicated to seeing it as it is, warts and all. Such clear-eyed vision has not set well with the rose-colored view of much of the Dallas establishment, many of whom must at times wish A. C. would take his skill and his insight somewhere else, say, like Houston.

In the portions of the book published in this issue we see Dallas becoming a city, from its origins on the banks of the Trinity as a trading post, to its existence as a small town and then on to becoming a major urban center. This sort of historical detail provides an insight into our past, and into the events and people that have made Texas what it is. The book is published by Bill Wittliff’s Encino Press, which has carved a growing niche for itself as an excellent regional press. The Encino built its reputation by publishing important manuscripts related to our Western heritage and is now adding books that illustrate our urban background, both past and present. The Encino’s books are invariably well worth reading.

So long as I am plugging Texas writers, I should mention that two Texas Monthly stories were recently reprinted: “The Lonely Blues of Duane Thomas” by Gary Cartwright from the February, 1973, issue was reprinted by The Washington Star; and “Closing Down LaGrange” by Al Reinert in the October, 1973, issue was reprinted by The Washington Post. In addition, Molly Ivins, who is co-editor of The Texas Observer, had a story on the Dallas-Fort Worth Airport in The New York Times Sunday Magazine. Molly’s story provided the framework for most of the 300 journalists from all over the world covering the airport opening. She was there first; the rest of us, in our own ways, followed her. That goes for me as well, and my story on the airport opening (page 74) owes a debt to Molly’s fine work.

Texas has always produced good writers. Unfortunately most of them had to travel outside the state to obtain recognition. Today, it seems that New York, the traditional mecca for good writers, is coming to Texas. That’s a good sign, and it hopefully portends that more of our really good writers and journalists will be able to stay here, to continue to show us through the prism of their talent, sensibility and work, our state in its variety and complexity, in its greatness and its chicanery, in the many contradictory aspects that make Texas what it is.