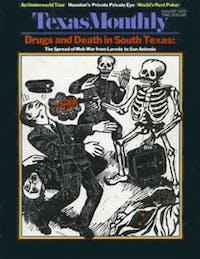 MANY OF THE ARTICLES IN this issue are, in one way or another, about crime. It seems we have opened Pandora’s box. Returning from lunch one day we found that the offices next to ours had been burglarized. The next afternoon we got a call from Al Reinert, who has written two stories for this issue. He had returned home from Las Vegas to discover that the apartment where he had just moved had been burglarized, too. “They were so damn thorough,” he said. “I’d left all my books in boxes. They unpacked them, took the hardbacks, and left the paperbacks on the floor.” But we had gotten used to Al’s calls coming on the brink of disaster. The last time was while he was in Las Vegas. (Even his being there came as a surprise since the last we’d heard he was in Houston.) “Sure do hope you guys want a story on the World Series of Poker,” he said. “I’m here with 60 cents in my pocket; 50 now that I’ve made this call.” It turned out to be a very good story indeed, and Al is back in Houston replenishing his library with new books—all paperback.

Al’s other story is a profile of Dudley Bell, Houston’s leading private detective. In the conduct of his business, which includes not only divorce cases and murder investigations but also debugging business offices and other aspects of corporate espionage, Mr. Bell has become quite knowledgeable in the means and methods of electronic surveillance. Bugging and surreptitious snooping have been much in the news lately and there’s no doubt that they are more prevalent than most people would have believed a year or so ago. It seems that in the technology of bugging, it is the buggers who have the advantage. The thrust of research is toward being able to bug undetected rather than being able to prevent bugging entirely. The latest development is the most frightening of all. It is a transmitter that is in the form of paint. It can be made in any color and can be applied to any surface that would take ordinary paint. It is, therefore, impossible to see or find. Nor will electronic debuggers sense it. They can discover only operating transmitters. This paint-transmitter is inert until it has been activated and that can be done by remote control. No known method of debugging will work against it. If they want to listen to you, they can. It’s that simple.

The feelings of nervous distrust which this information produced were increased when we found in the mail an advertisement for a paper shredder. “For instant security,” the ad announced and went on to say, “Shreds your papers and makes them unreadable.” If we returned an enclosed post card, we would receive a free “Record Retention Timetable” which would advise us of “retention periods as allowed by government authorities.” No doubt every business, including our own, has records that for perfectly legitimate reasons it wouldn’t want to get bandied about in public. Research reports, product surveys, plans for reorganization, personal records of employers, all these things and many others a company might properly want kept secret while they were needed and want to see destroyed when no longer needed. What was disturbing was the ad’s tacit acknowledgement of the fear that makes paper shredders desirable and “instant security” seem a necessity.

Security against what? Against burglars? competitors? blackmailers? the IRS? the “plumbers”? Well, the answer could be anyone of them, or all, or those and many others. It really doesn’t matter: With suspicion so tangibly present, everything begins to look suspicious. There is a general breakdown of trust, a feeling of isolation, of being watched, of disaster right around the corner.

This atmosphere of suspicion, which can surround even those engaged in legitimate pursuits, is not unlike the atmosphere in neighborhoods with high crime rates. Due to a financial squeeze that just wouldn’t relent, I lived in such a neighborhood for almost two years. If the statistics were to be believed, even a casual glance out a window should have shown prostrate mugging victims clogging the sidewalks and hordes of burglars loading entire houses into long distance vans. And there was a high crime rate. Some friends moved into the building next door and lived there for three months. They were burglarized six times, the man was held up at gunpoint, the woman had her purse snatched twice. Yet, for reasons I have still to fathom, nothing ever happened to me.

I was, I suppose, extraordinarily lucky; my friends were, obviously, extraordinarily unlucky. But the neighborhood was infected no matter which particular individuals were suffering or getting off easy. Neighbors did not wave to one another from their doorsteps; casual conversation did not spring up along the sidewalks or in the corner grocery store. Instead we walked quickly, particularly at night, wary, on edge, vulnerable, the distance between car door and apartment door seeming frighteningly long; then we sighed with relief once inside with the door locked, bolted, the lights brightly lit. Fear stalked us all. Even though nothing ever happened to me, my fear was equal to anyone’s. How could I know, you see, that tomorrow wouldn’t be the day?

Somewhere, sometime, I read a parody of a mystery novel in which the detective, informed that crime was rampant, is forced to ponder: “Crime,’ I thought to myself. “I knew I’d heard of it somewhere. But where?” Where indeed. Crime, like gold, is where you find it. This issue reveals some of the places we’ve gone looking.