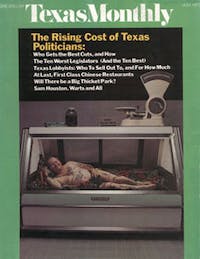 TWO MONTHS AGO IN OUR story “Sex and Politics” we took an affectionate, if irreverent, look at a side of our political traditions that is as old as politics itself, but which has rarely been discussed in public. This month we wrap up the latest session of the Texas Legislature by taking a look at a tradition as established as sex—lobbying. We also present a sitting-on-the-limb-while-sawing-it-off special rating of the best and worst legislators of the session.

Both of these projects are not the ordinary bill of fare that is presented to the cast of characters in Austin, and we encountered some interesting problems in doing our stories. Although lobbyists do not generally consider publicity of this type to be desirable, the majority of them received our inquiries with courtesy and civility, willingly cooperating and occasionally offering real insight into this much-maligned, little-understood, but unavoidably necessary aspect of democracy. A few, of course, were less than cooperative. Will Davis, who represents both airlines and insurance companies, informed us that “My clients’ business is not your business.” Happily, Mr. Davis’ response, while not unique, was not typical.

When it comes to rating legislators, it seems like everyone in Austin—lobbyists, staff members, reporters, secretaries, hangers-on in general, not to mention legislators—keeps his own list. As the session reached its end, when pressure grew and tempers became short, it seemed as if everyone’s “worst” list grew and the “best” lists shrank. Our final list is the result of hidden meetings in bathrooms at parties, of hushed conversations at the capitol, in bars, and in restaurants, and of secret don’t-tell-anyone-I-gave-you-this lists from legislators themselves. We think our list is fair and representative. Hopefully it redounds as much as possible to the credit of the fine, hardworking members of the legislature. We would like to think they set the tone and dominate affairs of state, but unhappily that isn’t true.

Taking everything into account, the legislature is basically a very hopeful place, more than ever before representing the people of Texas in their diversity and reaching new heights of democracy and openness in its functioning. Unfortunately, when such diversity confronts such democracy, efficiency in legislating tends to approach zero.

I was talking to ex-House speaker and convicted felon Gus Mutscher the other day and he allowed as how this current session, which was supposed to be filled with reform and good deeds, really hadn’t ended up being much different from the last session he ran. Now the former Speaker is hardly an unbiased judge, and the legislature did pass a flurry of significant legislation in the closing days of the session. The point Mr. Mutscher was making was not so much what was being passed but how.

The simple fact is that our legislators are overworked, underpaid, and understaffed. One legislator had to sleep in his office to save money; one wanted to apply for food stamps; several will not return because of personal financial hardship. Lobbying is a snap among representatives who have to worry how they are going to pay for lunch or where their rent check is going to come from.

Then when you take this personal financial condition, combine it with the ridiculously short, 140-day, biennial session, and add in the fact that about half of the legislators were first termers, you have to wonder how the system works at all. It is false economy and bad business not to pay our legislators a living wage and to force them to do their business under such pressure.

This sad situation can only be solved by the constitutional convention due to convene this spring, when the same cast of characters will be on hand to take hold of our constitution and bring it out of the dark ages. We can only hope that in their assembled wisdom the two houses of the Texas legislature will make it possible to govern both democratically and effectively.

Now I know that most of us are bored to tears by now with all this politicking. State government, though, is vital, anyway one looks at it, and vital more than ever now that the federal government is so intent on returning both power and financial resources to state governments. Right now our own state government ranks 38th in the nation in general effectiveness, according to the Citizens Conference on State Legislatures. That simply is not good enough. Many of the men you will see inside this issue will be the main players in the drama this spring, either obstructing or promoting the modernizing of Texas. We can’t let the obstructionists win. Too much is at stake—our air, our water, our schools, the safety of our personal property, our health, our cities, our transportation, and just about everything that has something to do with the quality of life in Texas. Hope for the best.

WE HAVE CHOSEN THE CONSTRUCTION of the capitol building in Austin as the subject of a new department in the magazine, Texas Yesterday. The purpose of this department is to present through photographs something of the feel of what our state used to be like. The capitol is an appropriate choice for an issue which focuses so much on Texas politics.

There is in Texas a commendable surge of interest in preserving our past, whether it be in rural Texas, on Swiss Avenue in Dallas, King William in San Antonio, Montrose in Houston or 6th Street in Austin. Even as we urge our lawmakers to raze and rebuild our outdated constitution, we can urge other lawmakers and individuals to take every step to preserve what is useful in our heritage. Both change and tradition have their place in Texas. The problem is deciding which is appropriate in any given case. Hopefully Texas Yesterday will show us some of what is worth preserving of our past.