“People think  photographers gravitate to  nothing  but beauty,” says Wyman Meinzer. “That’s not the case with me. I appreciate beautiful flowers, beautiful landscapes, beautiful skies. But there is an ugly side of life too.”

Meinzer, the official state photographer, regards himself as an ambassador of Texas, and the titles of the many coffee-table books he has published over the years suggest an appropriately fond and burnished view of where he’s from. Texas Sky. Inspiration Texas Style. Texas Rivers. Texas Hill Country. One of his books is called Between Heaven and Texas, though it’s not clear he believes anything actually separates the two.

Last June, though, Meinzer decided to shoot parts of Texas that had begun to resemble somebody’s idea of hell. The worst single-year drought in the state’s history transformed much of the countryside, leaving behind ruined crops, countless acres of burned and blackened land, and ranches littered with the carcasses of livestock.

“The drought was abysmal,” Meinzer says. “I felt it was my duty to document it in all of its ugliness.”

Being the state photographer of Texas isn’t a job, really. It’s an honorary title that was created in 1997 specifically for Meinzer. There’s no salary (“I only wish!”), no expense account, no official duties. He doesn’t have to shoot photos of Governor Rick Perry cutting ribbons or Speaker Joe Straus addressing a Daughters of the Republic of Texas luncheon. But Meinzer takes the honor seriously and makes sure that, as our ambassador, he represents every corner of the state.

For his drought project, however, he decided to stay close to home. Meinzer was born and raised in Benjamin, a town of about 250 people in Knox County, just a bit southeast of the Panhandle. He lives there to this day and has watched the drought hit his neighbors hard. The area is one of the only places in Texas that, even in the midst of the recent wet spring, was still categorized as being in “extreme” and even “exceptional” drought. “On the ranches in the badlands, which are just east of Benjamin, the main overstory shrubbery is juniper,” Meinzer says. “I would say up to 70 percent of that juniper actually died. Now, that no one has ever seen before. There were actually some mesquites that died. With a taproot going down probably twenty feet, it’s an issue when mesquites are dying on you.”

Meinzer figured that if he kept to Knox and three neighboring counties—­Baylor, Dickens, and King—he would have plenty of material to work with. The area, part of what’s known as the Big Empty, comprises more than a million acres of ranch land, much of it tended by people Meinzer has been around his whole life.

“I was raised on a ranch and understand what these farmers and ranchers are going through,” he says. “A lot of photographers have a tendency to exaggerate a little bit, maybe—set the deal up to where the shot happens just right. But at the big ranches where I went, all I did was, I roamed. I roamed and I found. And I documented what I saw.”

What he saw often unsettled him.

“Anytime that you see loss of life, that’s very troubling,” he says. “I would see animals starving to death, animals in a quagmire of mud that were trying to get one last drink of water and perished, because they had sunk so deeply in that they couldn’t escape. Or they became so weakened in their struggle to get out that even when you rescued them they died a day or two later. It’s just sad. You could see the anguish on the ranchers’ faces.”

In one of the photographs on the following pages, a rancher is seen walking toward a cow with his gun drawn. “That particular animal had been bogged down, and he’d gotten her out, and she just collapsed, probably from nerve damage from struggling so hard, and she became paralyzed,” Meinzer remembers. “So he walked up to her, and as he walked up I took that image, and then he shot her. That was tough on me. I imagine it was tougher on him, because that’s his cattle he’s had for years.”

Meinzer saw other terrible things as he roamed, things as terrible as the dust storms he witnessed as a child during the legendary drought of the fifties. He photographed once plentiful hunting grounds that are now nearly bereft of game, stretches of the Brazos that have gone bone-dry, and King County’s Croton Creek running—though “running” is not actually the right word—an almost biblical red after everything in the water died and bacteria took over.

“Every day was a new experience,” he says. “You knew you were going to find something. It was just a question of how bad it was going to be. When I would find a subject that really defined the drought, I was saddened by it. But at the same time I was excited because it gave me an opportunity to communicate such devastation.”

Despite his use of the past tense and the 2.7 inches of rain the region received last September (“That just saved our lives”), Meinzer worries that conditions may turn worse this summer. He expects to spend the season roaming the four counties again.

It’s all a far cry from the celebratory images he’s best known for. But even those famed photographs of beautiful flowers, beautiful landscapes, and beautiful skies have taken on a different cast in the light of the unrelenting sun. Many of Meinzer’s picturesque photos are beginning to resemble the work not of an ambassador but of a memorialist. Years from now, images that said to the world, “This is what Texas looks like!” may say something else instead: “Once, not so long ago, this is what Texas looked like.” 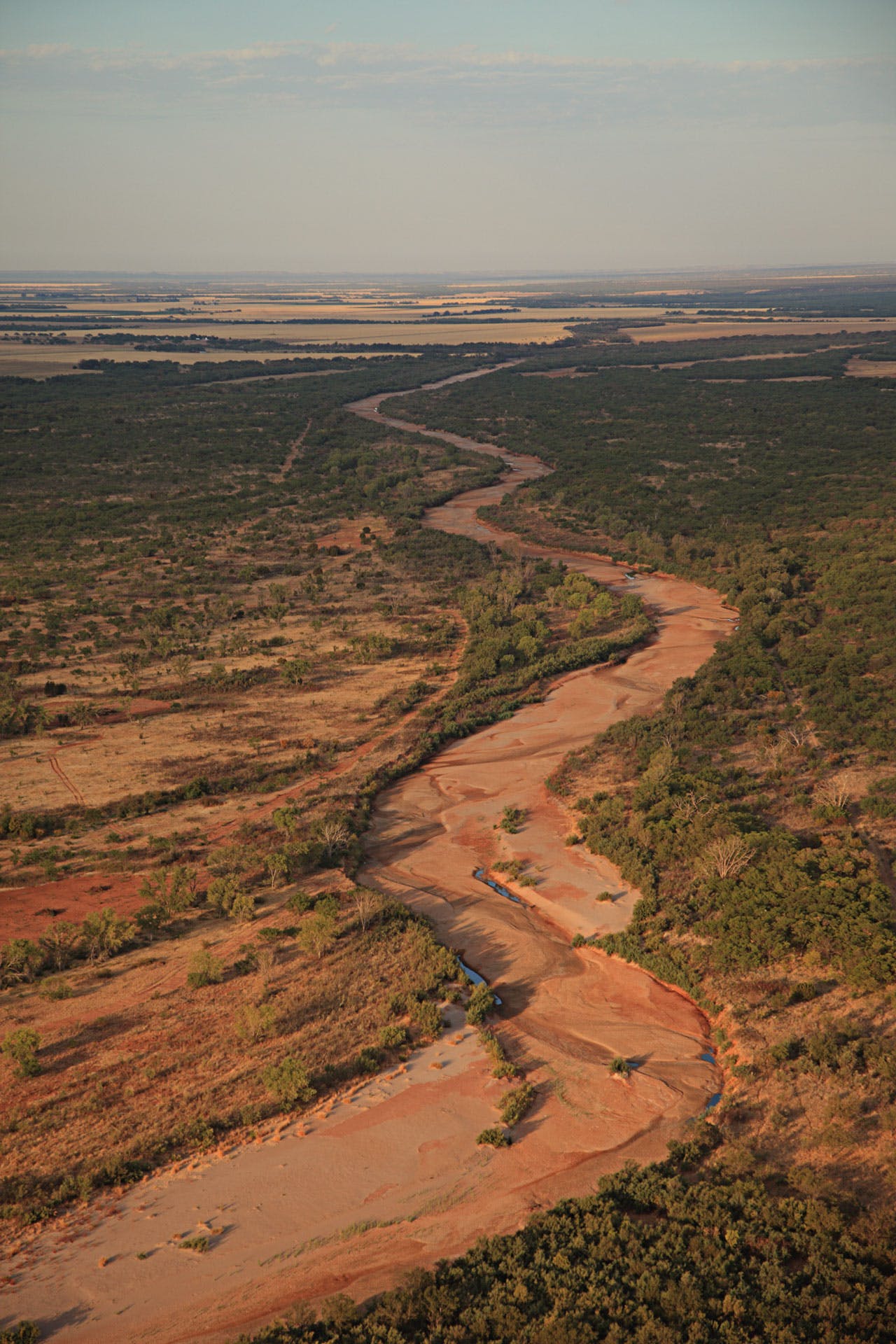 A parched Brazos River wends its way through Knox County. 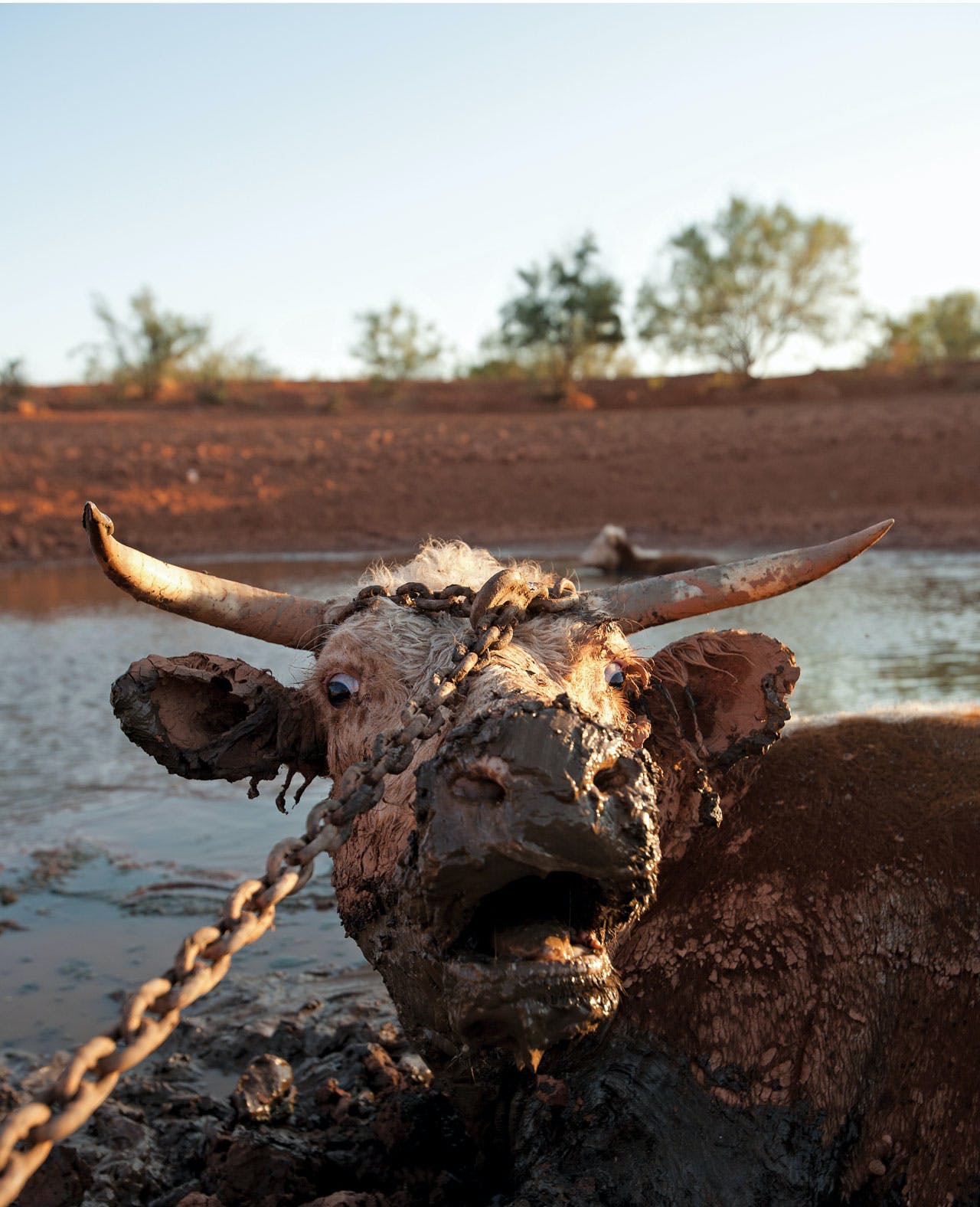 With stock tanks at historic lows, cattle, such as this steer on the Patterson Ranch, in Knox County, are driven by desperation to wade into the quagmire that surrounds each remaining water source, where they become stuck. 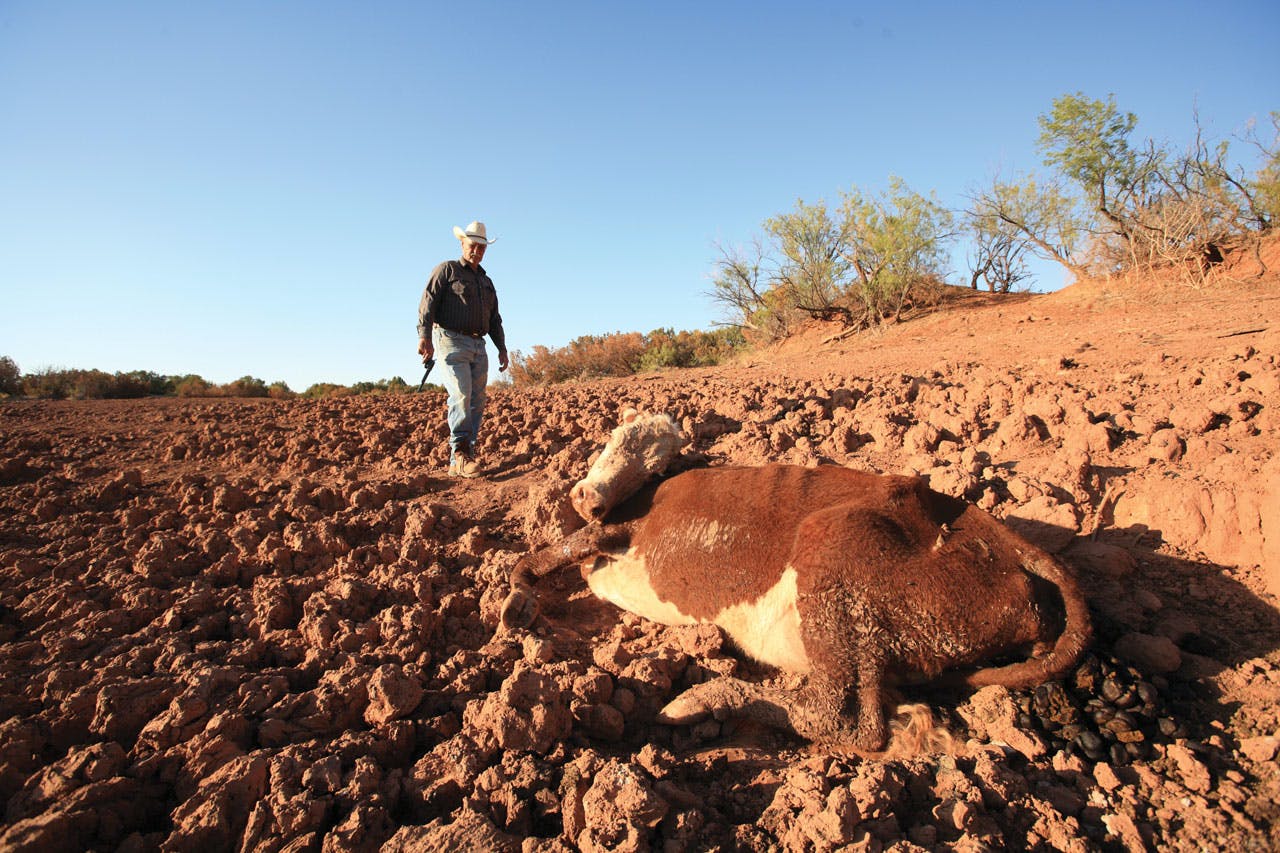 On the Patterson Ranch, a cow, paralyzed after a prolonged struggle to free itself from the mud, is about to be dispatched by Kynn Patterson. 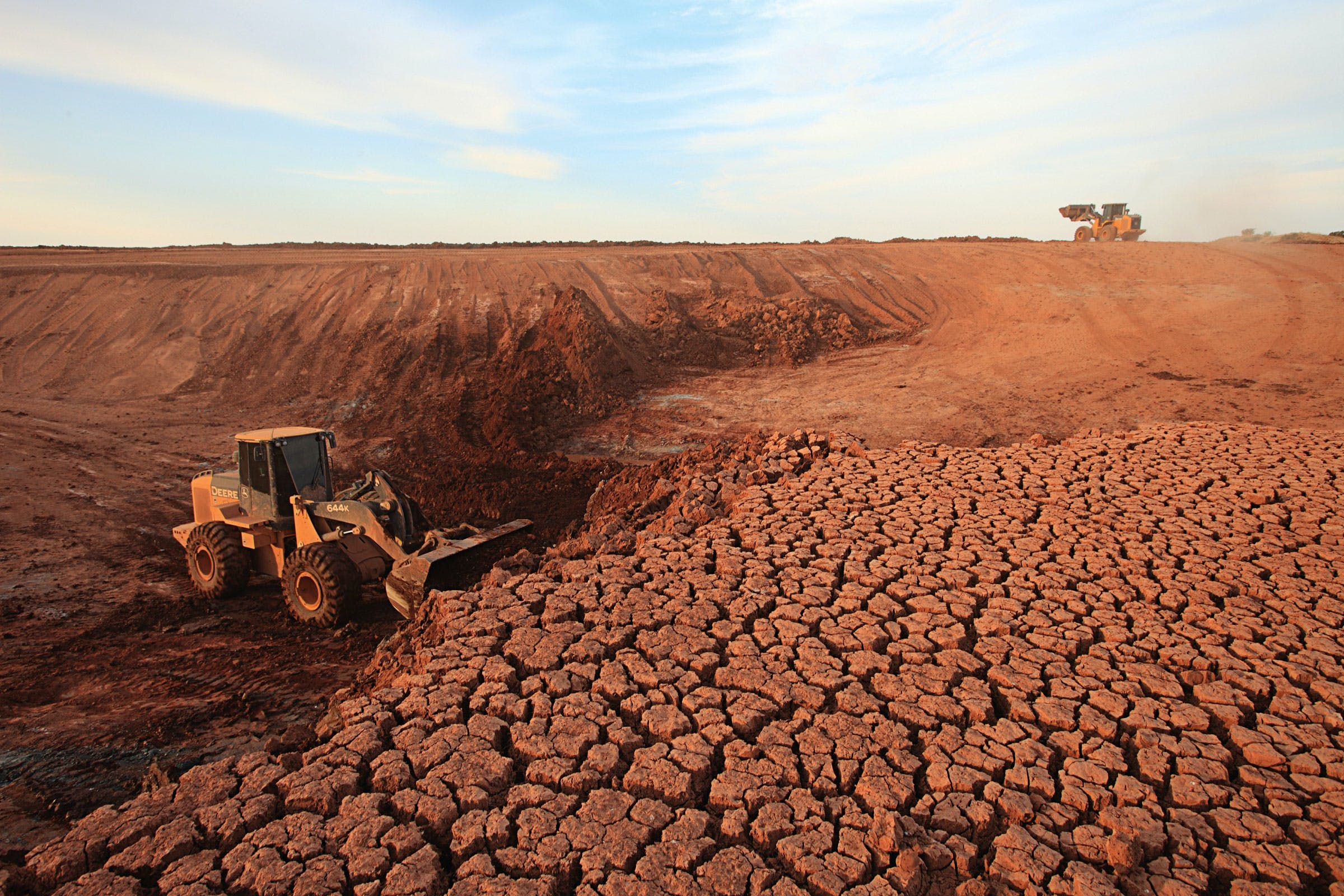 On the 6666 Ranch, in King County, earthmoving equipment is used to clean out dry stock tanks in anticipation of potential rain. 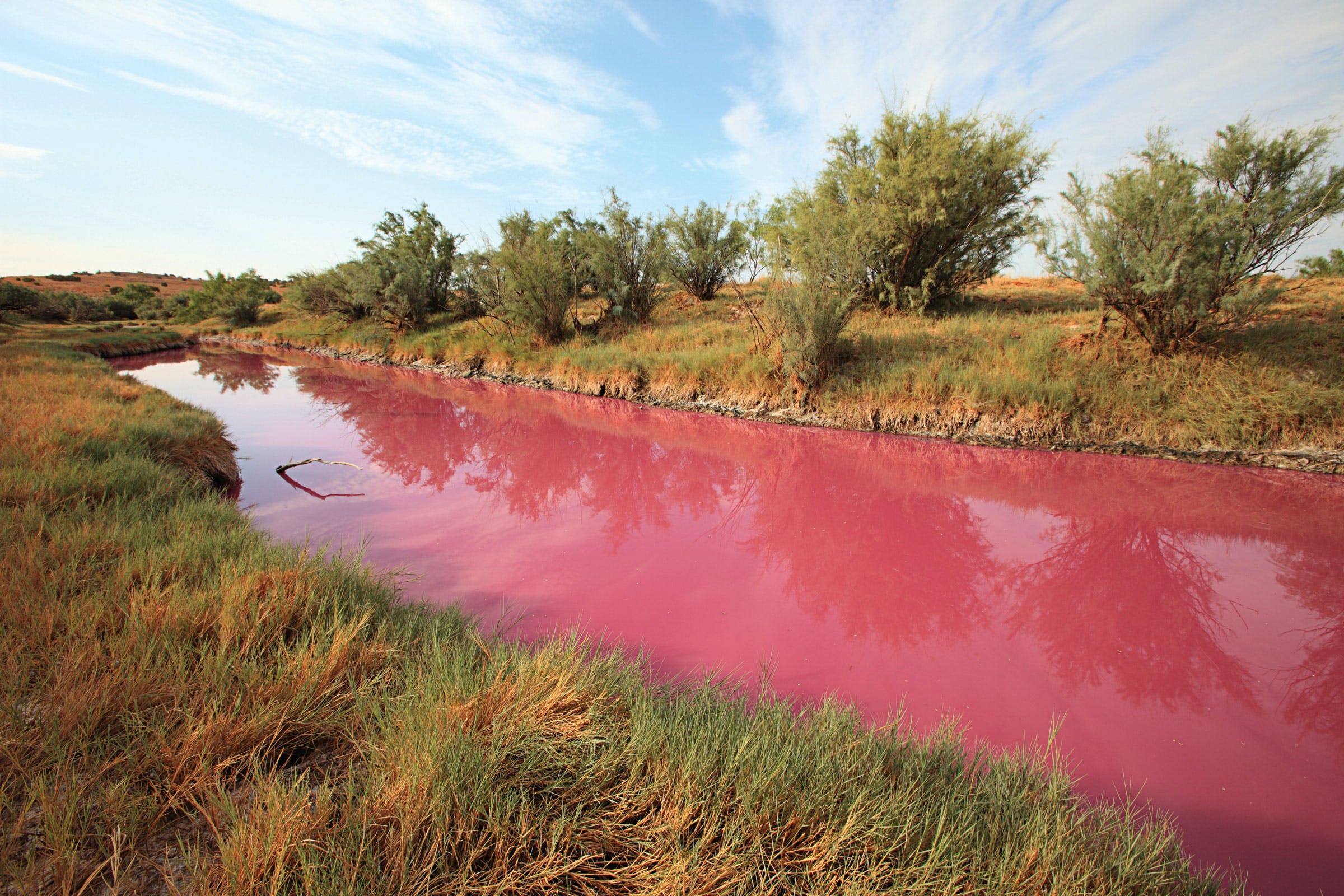 The bacteria Chromatiaceae, which grows in oxygen-deprived water, turns Croton Creek, a tributary of the Brazos, eerily red. 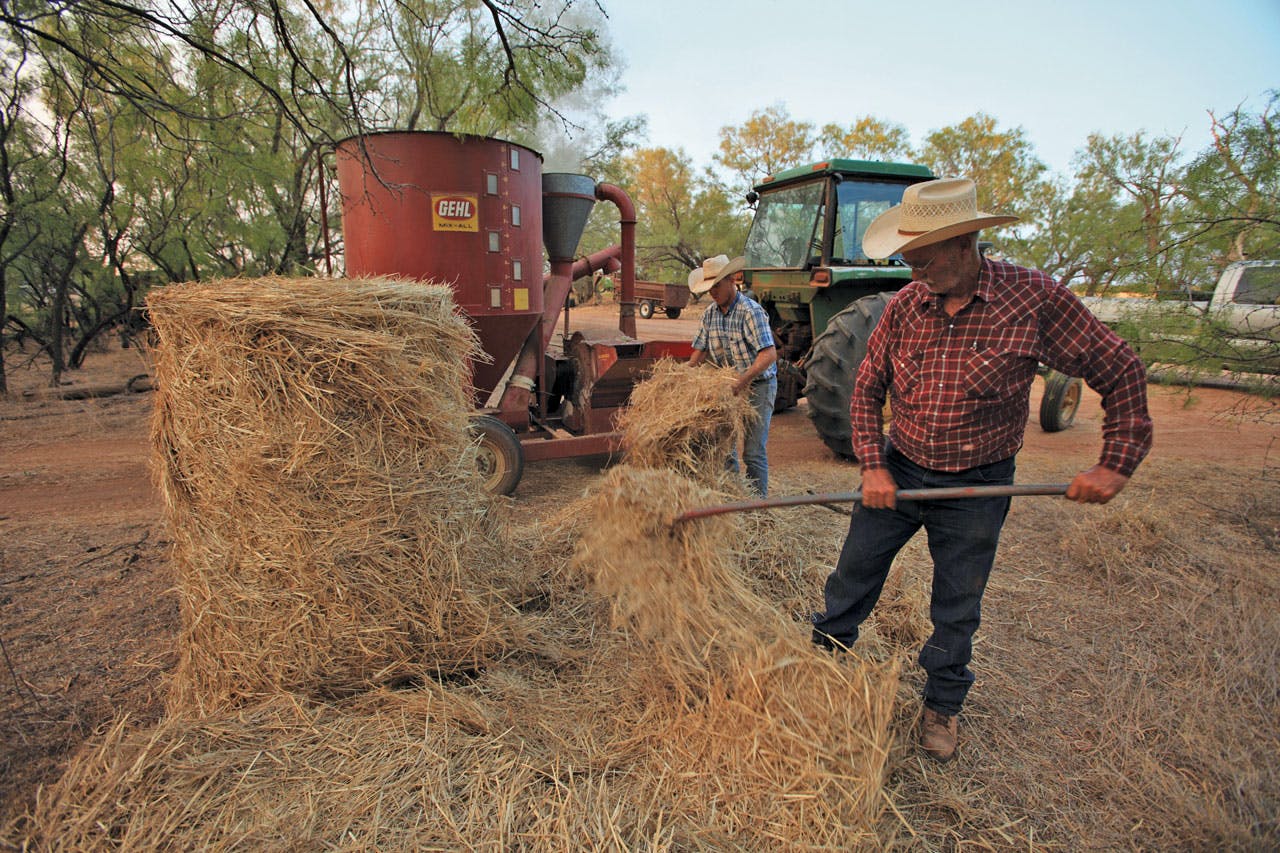 Rancher Kynn Patterson and his partner, Pate Meinzer (Wyman’s son), use an old mixer to produce their own cattle feed in order to avoid the high feed prices brought on by the drought. 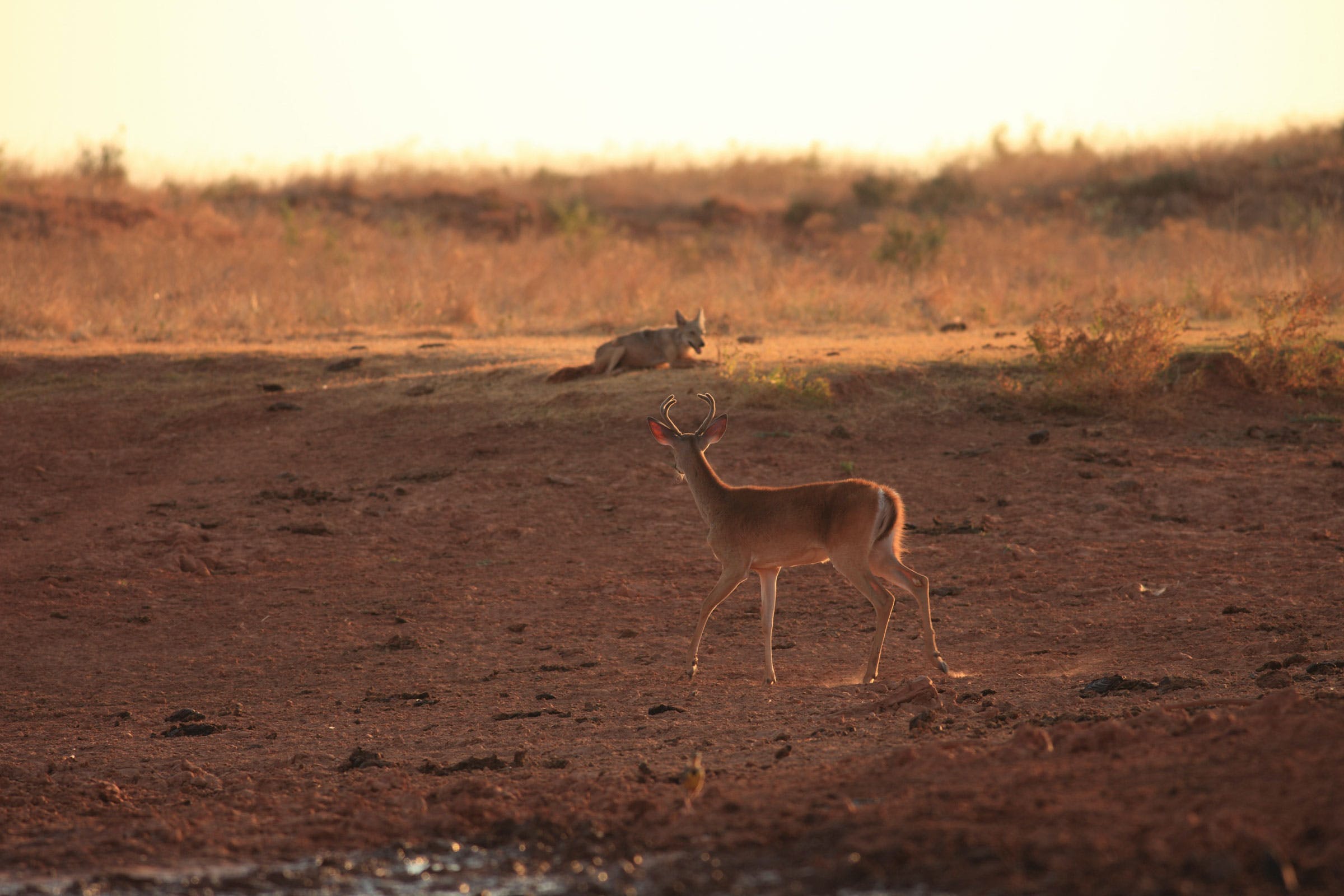 A coyote and a young whitetail, usually adversaries, eye each other cautiously near a dwindling water source in Baylor County. 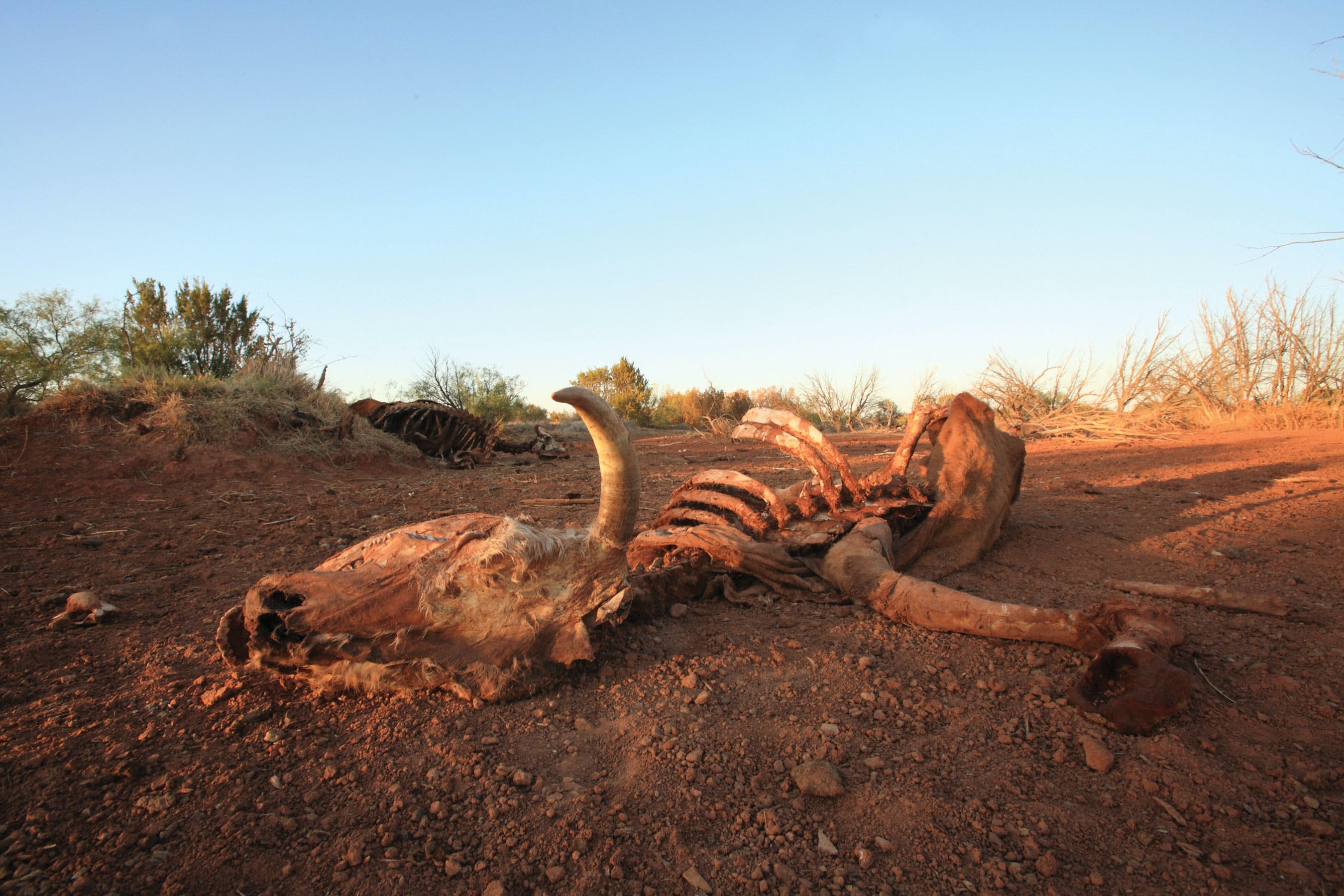 The carcasses of two Hereford cows that perished on the Patterson Ranch. 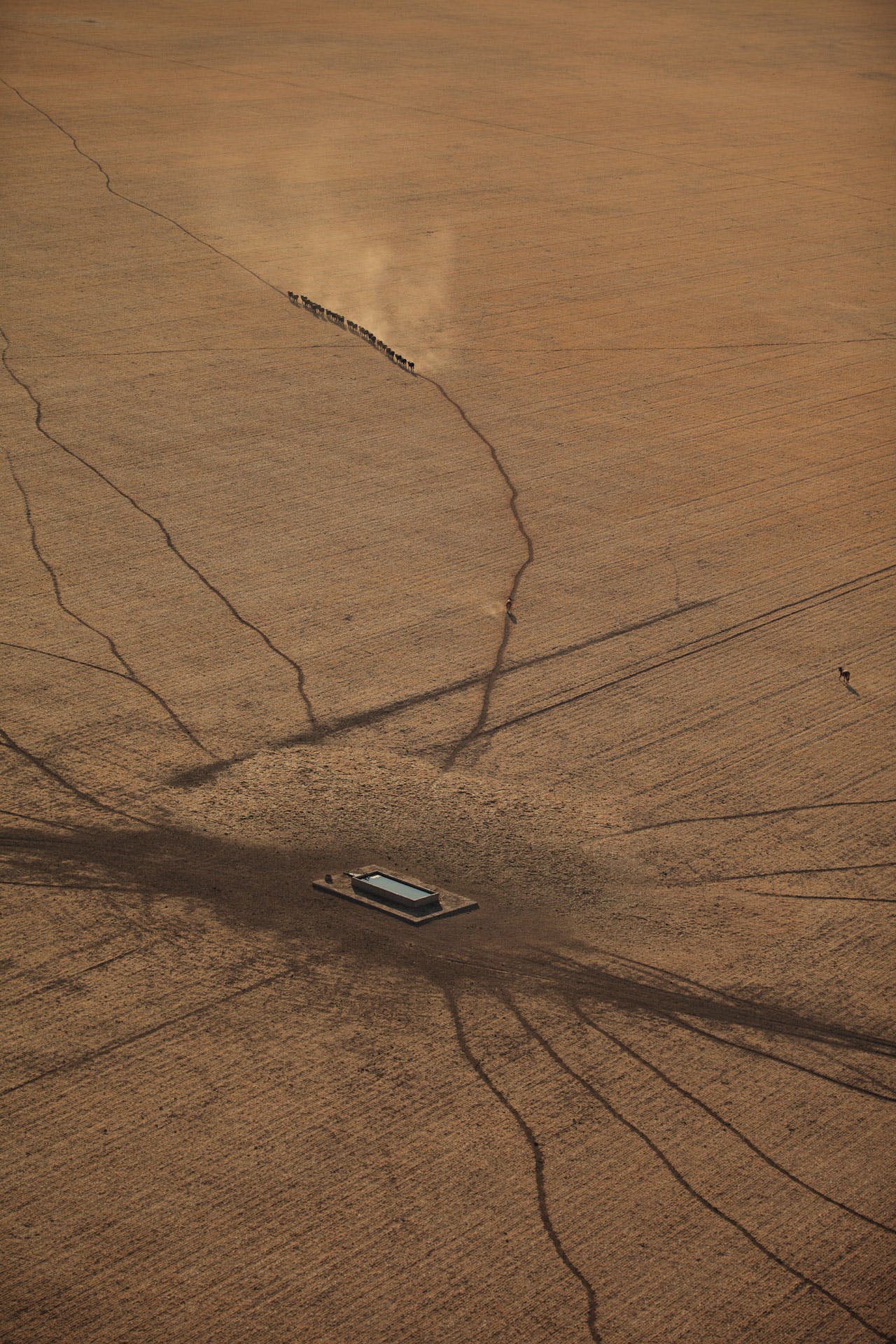 Heel dust marks the path of cattle leaving a man-made water source on the Williamson Ranch, in Knox County.