IN TEXAS, FEBRUARY MEANS RODEO, and at arenas all over the state both fans and contestants pay homage to Bill Pickett. Born near Taylor in 1870, the African American ranch hand invented the wild and woolly sport of bulldogging. Now called steer wrestling, bulldogging—as practiced by Pickett—involved jumping from a galloping horse to a steer’s back, biting the steer’s lip or nose to immobilize it briefly, then wrestling it down. Exactly how Pickett came up with his technique is uncertain—legend has it that he adapted his herd dog’s trick or (more romantically) that he first bulldogged on impulse when a runaway steer endangered his fellow cowboys. Regardless, he parlayed his skill into a lifelong career as a rodeo star.

Pickett left school at age ten to work full-time as a cowboy.

In 1903 his bulldogging stunt attracted his first promoter, who dubbed him “the Dusky Demon.” Two years later he joined the 101 Ranch Wild West Show, a Buffalo Bill Cody–style extravaganza based in Ponca City, Oklahoma, and remained a headliner for 26 years.

During a performance in Mexico City in 1910, locals bet Pickett that he could not best a fighting bull. A crowd of 25,000 watched him tackle a hefty speckled beast, which immediately gored Pickett’s beloved horse, Spradley. When it appeared that Pickett would still prevail, angry spectators started throwing beer bottles, one of which hit Pickett and broke two ribs. Undeterred, he held on long enough to win the 1,000 pesos. (Spradley, by the way, survived.)

Pickett was barred from many rodeos because of his race, and a line from the glowing eulogy written for him by his boss, Colonel Zack Miller, read, “Bill’s hide was black, but his heart was white.”

When the 101 show toured England in 1914, Pickett was promptly jailed on a charge of cruelty to animals. Thereafter he paid a weekly fine so the show could go on. (Steer biting was subsequently banned in the U.S. as well.)

At the age of fifty the “world’s colored champion” starred in a silent documentary film, The Bull-Dogger.

He died with his boots on: On April 2, 1932, an unbroken horse killed Pickett with a kick to the head.

In 1994 the U.S. Postal Service issued its Legends of the West series, a sheet of stamps honoring twenty heroes, including Bill Pickett. The next year, however, the embarrassed post office acknowledged that the picture on Pickett’s stamp was actually that of his younger brother Ben. 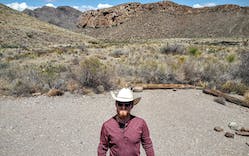 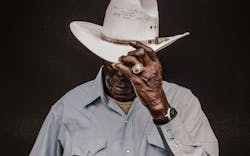 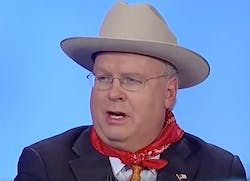