The formidable Ivery was joined by James Clay, a Dallasite who has played with Ray Charles for six years; and Louis Hubert, a mainstay with B.B. King for twenty years, brought his ten­or and baritone saxes. Dallas instru­mentalist and composer Roger Boykin and Richard Gardzenia played soprano saxes, and in the trumpet contingent were Chuck Willis, Willie “Tee” Al­bert, and Bennie “Chops” Arragando. 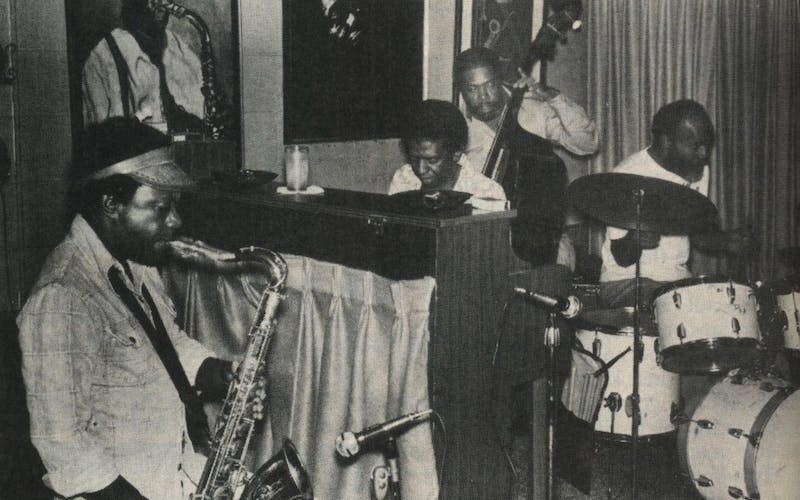 A nice touch on opening night was the presence of the legendary Henry “Buster” Smith, who was celebrating his seventy-fourth birthday at the guest-of-honor table. Smith is reputed to have been Parker’s mentor and his favorite sax player, he employed the young Parker as a sideman in the thirties. When asked if he was really the man who had taken a Fats Waller lick, re­fined it, and eventually produced from it the swing anthem “One O’ Clock Jump,” Buster smiled coyly and re­plied, “Well, yes, we were always steal­ing from each other—still do.”

Such stealing, or rather creative ex­changing of ideas, has always been an integral part of jazz, and there was am­ple evidence of it as the Dallas musi­cians worked through a litany of bop standards with a sprinkling of Gershwin and Berlin. A dramatic example of this synergy was the friendly but competi­tive tenor battle waged between Ivery and Clay. On such tunes as “Bounce,” “Four,” “Dig,” and “Scrapple from the Apple,” both men revealed aspects of the Texas school of jazz saxophone: a loud, forceful sound (as Clay said, “because we all learned to play in funny little joints without a microphone”); a more happy than sad blues orientation; and ingrained funk, the result of a heavy rhythm ’n’ blues influence. Yet each player is his own man, and the complementary contrast of Clay’s smoother timbre and flowing lines and Ivery’s raspier sound and punchy phrases created constant tension and release that enthralled the crowd.

The tenor battle was countered by Gardzenia’s soprano solo on “All the Things You Are,” which took a simple motif through various conjugations to an explosive climax. Hubert’s laid-back, breathy tenor on “I Remember April” revealed yet another fine bluesy Tex­as sax. The saxophones were punc­tuated by the melodic lyricism of Willis’ trumpet on “Never Let Me Go,” the Miles Davis-like harmony work of Albert on “The Best Things in Life Are Free,” and the solid blues trumpet of the older Arragando, recalling both Louis Armstrong and Roy Eldridge on “Now’s the Time.” All this was sup­ported by Winn’s melodic drumming and Scott’s cross-rhythm solos and solid walking bass. Reese’s right hand on “Ladybird” became a dynamo that pulled his left into play to create engaging two-fisted statements.

But if Bird did live again, it was pianist Red Garland who dispelled lethargy. He rode the avian block of ensemble sound through alternate glides and dives of great musicality and ex­citement. Like other Miles Davis alum­ni who have gone on to become major artists, Red controlled effortlessly from the keyboard. His comping behind the soloists fed a perfect balance of har­mony and rhythm that allowed each to fly on his own yet remain within the circle of fifths harmonic progression found in so many bop standards. En­tire choruses of blocked chords offset by ascending right-hand lines that ex­ploded into cascades of multi-linear de­scending figures were present in every Garland offering. And his highly pianistic extended rubato introduction to “Love for Sale” should simply be hung in a museum somewhere.

The Saturday night show closed with bop classics “Lullaby of Birdland” and “Cherokee” played at finger-breaking tempo. Several fans shouted “Bird lives!” as the house came to its feet, fingers snapping and heads bobbing. If the experience wasn’t religious, it was at least communal, and the final cathar­sis for both players and crowd attested to Parker’s genius, the strength of his legacy, and the resilience of bebop.