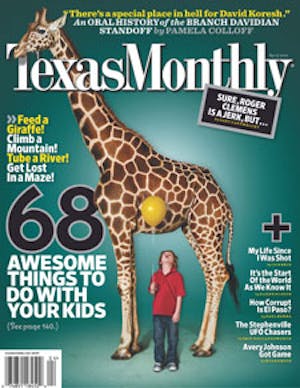 The good news first: Stop-Loss, co-written and directed by Kimberly Peirce (Boys Don’t Cry), is the first of the current spate of war dramas that doesn’t make you want to flee the theater.

Set in the fictional town of Brazos, Texas, and filmed in and around Austin, the movie tells the story of Brandon King (Ryan Phillippe), a decorated Army sergeant returning from combat who—instead of receiving his honorable discharge—is told that he’s being shipped back to Iraq. Stop-lossing, of course, has been one of the most controversial aspects of the Bush administration’s handling of the war, and Peirce eloquently captures the human emotions behind the depressing headlines: How can a soldier carry on fighting when he feels as if his government is using contractual fine print to cheat him out of a future? Without resorting to easy political bromides, the director also illustrates one of the fundamental ironies of post-9/11 America—that the rural, red-state towns that helped put Bush into office are the same ones losing a disproportionate number of men and women to the war on terror. (According to a November 2006 survey by the Carsey Institute, rural areas have suffered 27 percent of the casualties in Iraq and Afghanistan—even though only 19 percent of the U.S. adult population hails from such places.)

As for the bad news, well, Stop-Loss still doesn’t add up to much. The movie, which premiered at the South by Southwest film festival and opened nationwide late last month, takes a series of increasingly clunky turns: Brandon goes AWOL and heads off on a cross-country journey with his friend Michele (Abbie Cornish); Michele’s boyfriend, Steve (Channing Tatum), goes chasing after them; Brandon’s mother (Linda Emond) and stepfather (Ciarán Hinds) wrestle with whether to turn their boy in or help him escape to Mexico. Even at its most compelling, as when Brandon visits one of his former underlings (Victor Rasuk)—a blinded and maimed Mexican soldier who dreams of returning to Iraq because if he dies in combat, the government will be forced to issue his family members green cards—the film feels like little more than a mash-up of numerous better works, among them The Best Years of Our Lives, Coming Home, and The Last Detail.

All of this would be enough to ignore Stop-Loss entirely, if only it didn’t also point to a larger and decidedly disquieting trend. Indeed, following on the heels of half a dozen Iraq- and Afghanistan-related movies in 2007, Peirce’s work reminds us that Hollywood can’t seem to get this ongoing conflict right. Paul Haggis’s In the Valley of Elah was a dreary portrait of spiritual malaise and moral rot among soldiers returning from combat, starring a perpetually sourpussed Tommy Lee Jones. Rendition took the thorny subject of “extraordinary rendition” (the government’s relocating of terror suspects for torture) and turned it into a Cheez Whiz spectacle, complete with an extremely pregnant Reese Witherspoon waddling around Washington, D.C., demanding to speak to a senator. Both of these films, along with Robert Redford’s pedantic Lions for Lambs, the unrelentingly grim John Cusack vehicle Grace Is Gone, and the empty-headed thriller The Kingdom, took a nosedive at the box office.

What exactly are these filmmakers doing wrong? After all, as movies as far ranging as The Last of the Mohicans, Patton, Platoon, and Three Kings have proved, the war picture is one of Hollywood’s bread-and-butter genres. It shouldn’t be that difficult to serve up a memorable story about Iraq. Perhaps it’s the bizarre, ever-morphing nature of the conflict itself. How can artists trot out the same old plotlines—the noble warrior who can’t suppress the memories of his most ignoble acts, the booze-dependent soldier undone by the fact that he can’t communicate the horrors he’s seen—and apply them to such a quintessentially postmodern experience? Or maybe the problem is that, contrary to our digital-age compulsions to instantly turn our experiences into downloadable creative content, it is simply too soon to take aesthetic stock of the past seven years. Remember, Stanley Kubrick’s blistering Full Metal Jacket didn’t hit theaters until nearly fifteen years after American troops left Vietnam, while Steven Spielberg’s Saving Private Ryan was released more than half a century after World War II. Making sense of the senseless—the folly, the atrocity, and the moral slipperiness of war and its aftermath—takes a lot more time than directors like Peirce or Haggis have been willing to wait.

If Hollywood is determined to explore this subject, then a new approach is essential: A war that has been waged both in deserts and on city streets, and is streamed live on blogs and on CNN, demands nothing less than a formal revolution. It’s worth noting that of all the 2007 Iraq movies, only the Brian De Palma—directed, Mark Cuban—produced Redacted, which mixes faux documentary footage and mock YouTube clips to tell the story of a group of soldiers in Samarra who rape an Iraqi teenager and murder her family, feels as if it has something essential to say. Granted, the screenplay (which was inspired by a real-life incident in Mahmudiya in 2005) becomes didactic and overwrought, and the acting is plainly dreadful. But you can feel De Palma straining to address the way the Internet, and especially the widespread availability of video cameras, has changed the way viewers process war as a visual subject.

There’s no reason to think the Iraq and Afghanistan wars won’t eventually inspire their own masterpieces. But as Stop-Loss so frustratingly illustrates, it won’t happen until directors take a step back and adapt to new ways of storytelling for a media-saturated, techno-savvy era. For now, though, sentimentality and grandstanding are carrying the day. The brave men and women who have fought in Iraq and Afghanistan are being cheated out of an honest representation of their experiences. And American moviegoers are simply being pummeled into indifference.

Hope Among Ruins: Here’s a war flick you should see.

If you think the feature films about Iraq blur together, try sifting through the myriad documentaries on the subject, which are usually either political screeds masquerading as investigative journalism (Ghosts of Abu Ghraib, Oscar winner Taxi to the Dark Side) or impressionistic video collages masquerading as high art (Gunner Palace, Iraq in Fragments). Even an honorable effort like 2007’s much-lauded No End in Sight is a relentless assault of facts, figures, and bad news; it takes a herculean effort to make it to the end. But there’s a notable exception worth tracking down: Occupation: Dreamland (2005), a portrait of a group of soldiers in Fallujah that was widely overlooked by critics and audiences. Director Ian Olds dispenses with politics to capture the sometimes harrowing, mostly banal day-to-day experience of life during wartime. Three years after it debuted, the film’s observations remain original and trenchant.