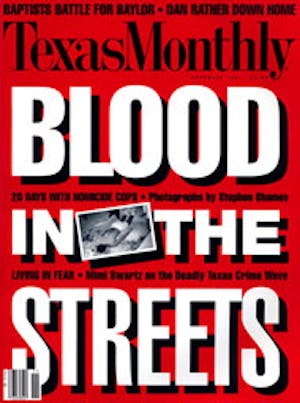 As far as i’m concerned, this is the highlight of the fair,” confesses James McCullough, the security guard at the entrance to the State Fair of Texas. McCullough has just opened the gate to a 1957 vintage fire truck toting about forty or so members and guests of Dallas’ Bonehead Club, who have arrived to shut the fair down before it even begins. “The only thing is,” he says, pausing to scratch his head, “no one ever pays any attention to them.”

This comes as no surprise to the Boneheads, who have been going against the grain of Dallas society for 72 years. The all-male organization was founded in 1919 by some disgruntled business leaders who were fed up with luncheon clubs. As one story goes, after enduring one such assembly, a peeved businessman turned to his colleague and remarked, “I have heard that speech so many times I could recite it.” In an effort to debunk the eager-beaver business mentality, they decided to start a lunch club that had no purpose at all.

Original members were some of Dallas’ most purposeful citizens, including the president of Southern Methodist University, a former mayor, the postmaster, newspapermen, judges, lawyers, and merchants. Early on, the group met every Friday at noon at the Baker Hotel; then they moved to the Adolphus, until its high-toned remodeling in the early eighties. Now Boneheads gather at the Lakewood Country Club, where the small group of mostly retired businessmen do their best to deßate pomposity. Their motto is, “To learn more and more about less and less, until eventually we shall know everything about nothing.” To further that learned end, all members are designated “doctor” and are automatically made vice presidents to prevent anyone from pulling rank.

On Friday, September 27, the Boneheads are setting out for one of their major annual events: the closing of the State Fair. To the rest of the world, that date marks the opening, but to this group of crotchety contrarians, the fair can’t be opened unless it’s closed first. So today they are arriving—an hour before city officials regale the hordes with opening formalities—to close the fair in front of an audience of two or three uninterested passersby.

Dr. George Bushong, 81, formerly the director of alumni relations at SMU, opens with a rambling message about tradition. Bushong hangs the club banner on the front gate and declares the State Fair of 1990 closed. The club members remove their derbies—except for several male guests who have been assigned women’s hats to wear and elect to keep them on. Dr. Charles Powers, a 66-year-old CPA, attaches an outsize gold wooden padlock to the gate; a tinny cornet played by Dr. Ken Lowery squeaks out an introductory snippet of “Melancholy Baby” before Dr. John Garlock interrupts with a heartier blast of “Lullaby of Birdland” on his fold-up pocket trumpet. Then the Boneheads eagerly reboard the fire truck for a box lunch on the empty greensward outside the Automobile Building.

Other annual Bonehead events are the Christmas party in April, the surprise party, and the presentation of the Bonehead of the Year award, as required. Recipients have always been deserving. They include Bo Pilgrim for handing out checks to legislators, the Hunt brothers for failing to corner the silver market, Richard Nixon for obvious reasons, and H. Ross Perot for receiving a $750 million check from General Motors and not cashing it right away.

Most of the membership is on the far side of middle age, but, deplores Dr. Bushong, the younger set “is under too much stress to get away for an hour and a half every Friday.” He adds, “Many of the original members were part of the downtown business establishment, and nowadays businesses are too far-ßung.” That doesn’t stop billboard-company owner Steve Millwee, 42, from attending meetings, even though he spends up to six months of the year in California. There are even second-generation members, such as Rex Aymond, 39, who admits, “Our humor probably isn’t funny to an outsider, but we don’t care.” One member of the Lakewood Country Club, gesturing sharply toward the group with his cane, advised me that although he had been amused by their goings-on for 37 years, he hadn’t been tempted to join, because, he said, “They’re too nutty for me.”