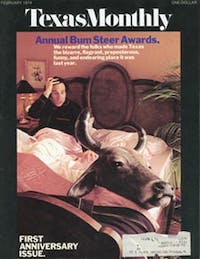 WELL, I’LL BE A DIRTY BIRD

The two Kids Kounty stores in Houston (think of the confusion had they been named Cids County) are the result of an original merchandising idea of the Lachman Rose Company. The stores are large windowless boxes each containing about 34,000 square feet of floor space and looking from the outside pretty much like any adult discount house anywhere. But don’t expect to find toaster ovens, folding lawn chairs, or dashboard cigarette dispensers at Kids Kounty. Everything there is for the Cradle to Groove Set (ages 0 to 12).

Here’s what my daughter, Margaret, age 12, and I bought on our first trip to the Kids Kounty store on the Katy Freeway (the other store is at the Southwest Freeway and Gessner): two pairs preteen jeans, one girl’s blouse, one pair hiking boots, school shoes, a pair of pierced earrings, a flea collar, Cue, Monopoly, and Snoopy.

Here’s what Margaret did at Kids Kounty: flexed her knees fourteen times in front of the Crazy Mirror, shook hands twice with Dirty Bird and U the Shoe, played Air Hockey for ten minutes, rode in the Tin Lizzie for five, stopped and started the electric trains until the manager moved her on, ate two scoops of ice cream and got her bike fixed.

Here’s what I did at Kids Kounty: walked too far, sat for 20 minutes on the Lollipop Bench, bought and ate four Old Fashioned Cinnamon Sticks, admired the equanimity of five mothers who had three or more small fry in tow, scowled at the mother who yelled at her kid, felt thankful my five daughters are almost all grown up, and spent too much money.

“This is one of the few places,” explains Maynard Warnken, Kids Kounty district manager, “where a parent can find in 30 minutes what would normally take two days.”

And indeed, if Kids Kounty continues to stock such a complete line (in price, quality and quantity) of clothes, shoes, furniture (six complete room settings), toys, games, pets and pet supplies, junior sports equipment, bikes, billiards and crafts, I suspect many a footsore parent may forsake the multi-stored shopping center for this new child-oriented store. Not only is the everything-for-kids-under-one roof concept new, but the year-round Disneyland flavor is designed to capture the kids’ imagination and buying loyalty. The four Kids Kounty characters, six-foot-high Peter Panda, Dirty Bird, U the Shoe and Connie Cone (also seen on local TV) who regularly stroll through the stores attracted so much more attention than Santa in the pre-Christmas holidays, the manager told me, that they cancelled Santa out the first week of December.

The Kids Kounty stores, open since last October, recently created upstairs Party Rooms where birthday parties—complete with favors, food, games and an appearance of one of the Characters—may be arranged for a fee. Game Rooms, also upstairs, will be used for various craft demonstrations and classes such as candle making and Red Cross for expectant mothers. These rooms are also available at no cost for non-profit groups like Scouts.

Most parents I spoke with were enthusiastic in their response to Kids Kounty, but one mother told me her 27-month-old son was so over-stimulated by the experience, it took her four hours to calm him down. There’s one kid who won’t be having his birthday this year with Dirty Bird.

On the morning following President Nixon’s first energy speech, which requested that we drive no faster than 50 miles per hour, I drove from Austin to Houston following Highway 71 to Columbus and taking Interstate 10 the rest of the way. I drove at 65. I had no real quarrel with driving at 50, but I considered it a social disgrace to be seen in public supporting the President at all. On that trip, although I passed numerous busses and trucks and old rattletrap cars that would have been moving slowly no matter what the President had said, I passed only three cars ostentatiously cruising at 50 and one immense Lincoln driven by a leather-faced dowager doing 40.

But as gas prices started going up to 38, 39, even past 40 cents a gallon for regular, prices unheard of in these parts, people began to believe that the whole situation, whatever its cause or cure, really was going to affect them. During the next ten days three different people approached me in filling stations to ask, horsetrader’s gleam in their eyes, what I would take for my compact car. I told one man, “I want a zillion dollars. Cash.”

Unamused, he shrugged phlegmaticalIy. “That’s a little steep,” he said and ambled back toward his car.

About ten days later I returned to Austin from Houston following the same route and still driving at 65. I passed 12 cars which were going 50, a 400 per cent increase from my earlier trip. On the other hand I became increasingly annoyed with drivers going fast enough to pass me. Somewhere around La Grange I decided to slow down, Nixon or no Nixon. The pressure of the brake against my foot made me sigh. It was the first time I had considered the proposition that certain things I needed to live the way I want to live might just run out.

Later I found myself, along with everyone else, becoming more stoic about the situation. The most marked change in driving habits came after the President’s second energy speech which requested, among other things, that filling stations close Saturday night and all day Sunday. Weekend travelers found themselves driving at 50 to preserve their gas until the stations were open again on Monday. Most of them I talked to found they liked it. “I arrive so relaxed,” was the most frequent assertion, And it has a corollary: “Driving didn’t give me a headache this time.” An itinerant musician was positively estatic about the lower speed limits: “I’ve been driving at 50 for years. For one thing it really does save gas and I need the money. For another thing, after night after night playing and day after day on the road, I don’t trust myself at much over 50,” He added that he’d been stopped several times for driving too slow and had about run out of excuses, The next time he’s going to tell the officer he’s just trying to support the president.

The only problem for the average driver I’ve been able to see is one indigenous to the Texas highway system—the left hand lane driver. I am convinced that so many Texans drive only in the left hand lane because the road signs read “Slower traffic keep right”. And what panty-waist wants to admit to being slower traffic? In most states the corresponding signs read” Keep Right Except to Pass.” Sure enough the last trip I took I saw a new species of left lane driver on the road, a recent mutant of the energy crisis. He drives a big car at exactly 48 miles per hour; at night he leaves his bright lights on to punish those who pass him; and all-American Texan that he is, he makes them pass on the right.

Texans often complain about the state’s peculiar liquor laws—modernized but certainly not simplified with the advent of liquor-by-the-drink. The Alcoholic Beverage Commission’s red-and-green map of local drinking roles looks like a patchwork quilt of wet and dry precincts, some allowing nary a drop, others approving only beer, or just beer and wine, or just package sales, and an increasing number going the full way with Demon Rum by permitting mixed drinks over-the-counter. It could be worse, however. Before dismissing all this legal latticework as the product of Southern Protestantism, consider the following excerpt from the liquor laws in (of all places) the Canadian province of New Brunswick:

(b)Licensed Dining Rooms. Adults of either sex may purchase liquor by the glass with meals for consumption in the Dining Room only.

(c) Licensed Lounges and Cocktail Lounges. Adults of either sex may purchase in such Lounges liquor by the glass for consumption in the Lounge with or without meals.

(d) Taverns. A male adult may purchase beer only by the glass or open bottle for consumption in the licensed premises.