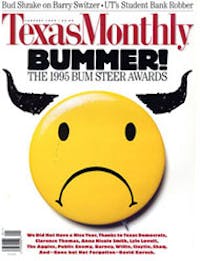 Images from the magazine are not available online.

Painter Jerry Bywaters labored for sixty years to promote Texas art, often at the expense of his own. An ardent regionalist and devoted Texan, he produced within a single decade an impressive and lasting body of work, a creative burst that ended with his 1943 appointment to head what was then the Dallas Museum of Fine Arts. For the next twenty years, Bywaters—who died in 1989 at the age of 82—put his talent on hold to serve as the museum’s guiding light and to teach future lantern-bearers at Southern Methodist University. He also became the region’s preeminent art critic and historian. In Jerry Bywaters: A Life in Art, an engaging biography just published by the University of Texas Press, author Francine Carraro (a former student of Bywaters’) emphasizes the many facets of his work as painter, mentor, and curator.

Bywaters was born in Paris, Texas, in 1906. At age seven a fall from a ladder left him severely injured and in the year of bed rest that followed, young Jerry entertained himself largely by drawing. In 1922, entering Southern Methodist University, he envisioned a writing career; not until his senior year at SMU did he take a formal art class. During a post-graduation European tour, the aspiring journalist wrote humorous dispatches for the Dallas Morning News (which published his articles off and on until 1959), but ultimately the trip clarified his yearning to become an artist—and he dropped all pretense of entering the family dry-goods business. In 1928 he took a swing through Mexico and met Diego Rivera, whose populist vision of art so affected Bywaters that he espoused it the rest of his life. He then briefly took classes at the avant-garde Art Students’ League in New York, where one of his instructors was the highly regarded social realist John Sloan. Ready to paint in earnest, Bywaters moved back home to Dallas.

In Dallas, the young artist enjoyed the advantage of a comfortable social milieu. His parents’ money enabled him to build his own studio, the first commission undertaken by a novice architect named O’Neil Ford. When Bywaters married Mary McLarry in 1930, his groomsmen included Ford and cultural historian Henry Nash Smith. Studying at the Dallas Art Institute, Bywaters met other young painters—among them Otis Dozier, Alexandre Hogue, Everett Spruce, and William Lester, a group with whom he was linked stylistically forever after. Young bohemians all, they actively rejected Impressionism, which had long held sway in the art world. (In one essay Bywaters once chided, “Monet, old man . . . What a shame you got so interested in pretty color that you sold your talent for a mess of chromatism.”) Bywaters and his cronies waved the banner of regionalism; they sought to produce a purely American art. The economic realities of the Depression helped to reinforce their beliefs. Hired to paint murals by the Public Works of Art Project, which was part of the New Deal work relief programs, Bywaters and Hogue finished ambitious paintings of history and commerce for Dallas’ Old City Hall and what was then the Houston Parcel Post Building. Thomas Hart Benton, the leading proponent of American regionalism of the day, saw one of them and commented, “I’ve seen enough art in my time to be sick of most of it and yet I found your Dallas City Hall job interesting.”

Bywaters’ creative break came in 1934, and from that year until 1942 he executed a series of clean, bright, unsentimental images—dusty main streets and battered West Texas cabins, sweaty sharecroppers and small-town electioneers. In many of his works he incorporated Texas symbols such as cacti, windmills, and cow skulls in a remarkably original way. His best known painting, Oil Field Girls (1940), shows two hookers poised against a drab background of billboards and derricks, waiting to hitch a ride along the blacktop.

In 1942, unable to fight in World War II because of his childhood head injury, Bywaters became art director for the Dallas Museum of Fine Arts and began teaching at SMU. The next year, he agreed to a one-year appointment as director of the museum. The hectic schedule must have made his previous, unstructured days of traveling and painting seem like a dream. As museum director, Bywaters organized elegant exhibits that packed a cultural wallop—including the United States’s first-ever showcase devoted to Mexican painters Rufino Tamayo and David Siqueiros. He urged the curatorial staff to focus on acquiring American, regional, and Hispanic art. So effective was Bywaters that his one year as director stretched into two decades. Because of his strong community ties and his sterling reputation, Bywaters survived a McCarthy-era attack by Dallas conservatives who accused him of promoting Communist artists instead of red-blooded Americans.

In 1963 the Dallas Museum of Fine Arts and the city’s Museum of Modern Art merged. Having toiled long and hard, Bywaters resigned. Though he continued to teach at SMU—to which he donated his extensive archives—he settled into semi-retirement, experimenting with watercolor landscapes. Then, in 1985, the Dallas Museum of Art drew overdue attention to the so-called Dallas Nine—its term for the realists Bywaters had allied himself with during his student days. The exhibit, “Lone Star Regionalism,” focused on the work of the “Texas School,” and Bywaters—along with Dozier, Hogue, Spruce, and other elderly collegues—found himself a celebrity. According to biographer Carraro, “Sometimes with humor, but never with nostalgia, he painted Texas without the props of cliché. . . . He knew, like every true Texan, that the land is hard and the weather unrelenting. Bywaters’ art described the hard times—farmers defeated by insects and wind and the loss of innocence in the oil fields. His work was in touch with the common people.”