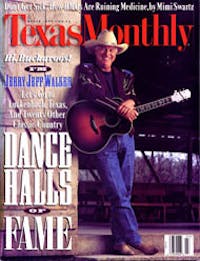 In no other state were the turbulent thirties documented as exhaustively as in Texas, where Farm Secirity Administration photographers such as Dorothea Lange and Russell Lee took more than five thousand pictures of Depression and pre-war life . When the agency became the Office of War Information, some of its staff focused on chronicling the home front. Two hundred of the images appear in Picturing Texas: The FSA-OWI photographers in Texas, 1935-1943, just published by the Texas State Historical Association ($49.95).