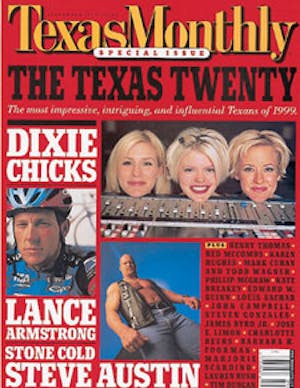 RARELY HAS A POP ARTIST’S legacy rested on such a small and erratic output. But it seems strangely appropriate to Janis Joplin, who practically disappeared from rock radio soon after her 1970 death and the 1971 success of Pearl, yet who is somehow, in 1999, having perhaps one of her biggest years. In March Alice Echols’ exhilarating yet chilling Scars of Sweet Paradise: The Life and Times of Janis Joplin (Metropolitan) became the first biography to portray the Port Arthur singer as a whole person, shaped by her bottomless neediness and an American bohemianism that morphed into mass culture. Now comes Box of Pearls, containing all four Janis studio albums, each with bonus tracks, plus an EP of five previously unreleased songs. The four albums are also being rereleased individually, along with a greatest hits set.

The music reveals little new, despite a fine version of Eddie Floyd’s 1967 soul hit “Raise Your Hand.” But ironies come into sharper focus. Her debut effort, Big Brother and the Holding Company, is amateurish but sweetly endearing folk-rock. Cheap Thrills, once widely cited as proof that she totally outclassed her first group, sounds more like garage-band heaven (especially if you have a meth lab in your garage). Despite a sound that is vastly improved over the original, I Got Dem Ol’ Kozmic Blues Again Mama! proves that she and her short-lived horn band were never ready to record. And on Pearl, the five-piece Full Tilt Boogie Band, widely considered her best, sounds surprisingly loungey. But no matter how good, inept, or inappropriate her backing, Janis is always singing with perfect pitch, crystal-clear intonation, flawless rhythm, and more passion than she knows what to do with. Because she is also so raw and rough, and her persona is so much bigger than life, it’s usually overlooked that she was as extraordinary a singer as rock and roll has ever produced. John Morthland

CARL FINCH STARTED BRAVE Combo as an arty, high-concept tribute to the polka, a lowbrow, much-maligned musical form so square that Finch made it ultra-hip by merely acknowledging its existence with a straight face. Over the ensuing twenty years, Brave Combo has become as much an institution as the polka itself, to the point that the most important rite of passage for students at the University of North Texas is no longer the first football game but rather the first Brave Combo show. While the group, still led by Finch and Bubba Hernandez, is better known these days as a human world-music jukebox tailor-made for dancers (how can you not move to “The Hokey Pokey”?), Polkasonic brings Denton’s little band that could full circle, paying respects to their founding muse with eleven standards, ranging from the obvious (“Apple, Peaches, Pumpkin Pie”) to the more obscure (the puro tejano polka “Conchita, the Waitress,” which is straight out of the Little Joe songbook), with one ringer, a polkatively inspiring version of Jimi Hendrix’s “Purple Haze.”  Myron Floren and Frankie Yankovic owe them, big time. Joe Nick Patoski

Rubies on the Lawn
Doolittle

“I THINK I’LL TOSS OFF the semi-gloss / Lose a little sheen,” Trish Murphy sings on “Me Behind the Wheel,” the second track on Rubies on the Lawn. But the truth is this robust follow-up to Murphy’s 1998 debut, Crooked Mile, is less rubber-to-the-road and more bright-and-bouncy whitewalls. This is not a bad thing—the Houston-raised, Austin-based singer-songwriter blends her thoughtful, sharply-crafted lyrical sketches with melodic, unapologetically accessible guitar-rock. The tension between the two sides heightens the impact of both. Her background suggests that Murphy would rather be compared to Tom Petty than lumped in with the Lilith Fair (which she has participated in), but it doesn’t have to be a gender thing to say she’s like Lucinda Williams with no twang and a giant Beatles jones, or a gritty version of folk-pop songstress Kirsty MacColl. One complaint: Certain songs don’t need to be covered ever again, and Murphy’s alt-garage attempt at gussying up Nancy Sinatra’s “These Boots Are Made for Walkin’” does not qualify for a waiver. Jason Cohen

The Writing’s on the Wall
Columbia

R&B THEY CALL IT, BUT ANYONE who grew up listening to Etta James will wonder where the blues are in today’s version. Pouty resentment? Sure. Hard-won cynicism? You bet. But the blues? Forget about it: This music boasts too strong a sense of entitlement to cry in its Moet. Rhythm, on the other hand, jumps in and out at alarming rates—a stuttering high-hat one micro-moment, a stop-and-start snare the next. The prolific Virginia producer Timbaland founded this school of ear-bending black pop, and on the top ten album The Writing’s on the Wall, Houston-based Destiny’s Child does it better than most, especially when producer Kevin “She’kspere” Briggs, who helmed TLC’s chart-topping “No Scrubs,” is working the boards. On “Bills, Bills, Bills” (the number two single in the country at press time), Briggs surrounds singer Beyoncé Knowles with all sorts of studio gamesmanship: a jittery popping sound, a mechanical breakbeat that rushes the beat, and an unfunky foursquare rhythm track on the chorus. That sort of trickery might undo a lesser talent, but Knowles maintains her composure—and the distinctive cry in her voice. If she’s not quite singing the blues, she’s sure earned the right to. Jeff Salamon

LIKE ITS FORMERLY DISPARAGING taquachito label, conjunto has evolved from its migrant worker beginnings to cross-cultural acceptance. Tourists and locals flock to numerous festivals, the most important of which takes place in San Antonio, where there is even a Conjunto Hall of Fame. Yet the overwhelming lure of modern commercial tejano is drawing radio, record labels, and young fans away in droves. A shame, since nothing evokes the dusty South Texas border like the humble music of the button accordion and bajo sexto, which has absorbed Mexican, German, Czech, Cajun, and countless other influences throughout its history. These nineteen well-chosen and superbly recorded selections date from the 1998 Narciso Martínez Cultural Arts Center’s Conjunto Festival in San Benito and feature a lively mix of classic and contemporary material from such well-known practitioners as Valerio Longoria, Sr., and Tony de la Rosa, an array of performers whose common goal is not the next big thing but a full dance floor. Jeff Mccord

THIS IS ONE HORRIBLE BOOK, and its author would be the first to agree. Gary Lavergne of Cedar Park follows up A Sniper in the Tower, his impressive recounting of Charles Whitman’s murder spree, with this exhaustive and emotionally exhausting examination of a bestial killer. The details make for grim reading, but ultimately Lavergne shows how the ill-conceived paroling of McDuff led Texas to overhaul its criminal justice system. Readers, prepare to shudder.Anne Dingus

Another Austinite, Darryl Wimberley, makes his fiction debut with A Rock and a Hard Place (St. Martin’s Press), which could be subtitled “Cops Are People Too.” It neatly contrasts black detective Barrett Raines’s family life with his no-time-for-crying homicide investigations. In the mode of the late, great Charles Willeford, Wimberley chisels out a rough-and-ready tale of murder, suicide, and gunrunning in a tiny Florida coastal town. After Raines arrests ne’er-do-well brother Delton as a suspect, the air is thick with pathos and flying bullets before the whole sordid affair ignites in a bang-up finale.…The Alibi (Warner Books) will likely land Fort Worth’s Sandra Brown on the New York Times best-seller list—her thirty-eighth visit to that author’s mecca. This steamy cops-and-barristers intrigue features nifty, serpentine plotting. It’s worth investing a few hours poolside with a cold beverage, but beware the breathless delivery and knee-trembling dialogue.…Places Left Unfinished at the Time of Creation (Viking) might not be a page-turner, but John Phillip Santos’ elegy to his extended San Antonio family and Mexican forebears is an unrelentingly gorgeous memoir. His husky poesy serves his theme well—the loss and decay of his heritage. “It sometimes seems,” he says, “as if Mexicans are to forgetting what the Jews are to remembering.” But he draws from centuries of history and great wells of emotion to construct a remembrance that flies in the face of his very words. Mike Shea