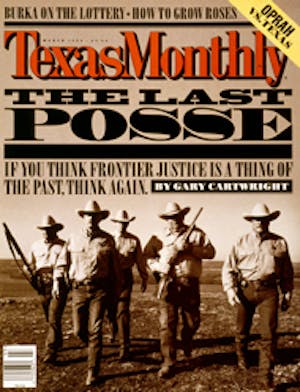 FOR A GENERATION, Texas has been a veritable God’s country of CEOs, producing more of the nation’s most dynamic business leaders than a Brooks Brothers suit has pinstripes. The roster of Texans who have famously or infamously ascended to national prominence includes Ross Perot of Perot Systems, Herb Kelleher of Southwest Airlines, Robert Crandall of American Airlines, and Charles Hurwitz of Maxxam. So it should be no surprise that a new collection of essays, Straight From the CEO (Simon and Schuster, $25), includes entries from three Texans—more than from any other single place. What is surprising, though, is who those three CEOs are. Rather than high-profile, mug-for-the-camera types, they are low-key, efficient visionaries who have guided their companies to the top of their industries: Eckhard Pfeiffer of Compaq Computer and Kenneth Lay of Enron, both of Houston, and Dallas-based Michael Z. Kay of LSG/Sky Chefs (that’s right, the airline-food people).

How that success was achieved varies from CEO to CEO and business to business. But conclusions drawn from the book, which was the brainchild of the Big Six accounting firm Price Waterhouse, and a recent survey of 377 CEOs dispel the popular image of a despot in a cushy glass-walled office obsessing over the bottom line. Instead, CEOs are starting to seem touchy-feely. “We almost titled the book CEOs: The New Behaviorists,” jokes one of the book’s co-editors, G. William Dauphinais, Price Waterhouse’s vice chairman of human capital. “More than reviewing financials, more than monitoring customer relations, CEOs are worried about employee behavior and culture.” The essays by Pfeiffer and Kay bear this point out: Pfeiffer writes of creating the “culture of self-renewal” that helped Compaq rebound from near collapse in the early nineties, and Kay focuses on inspiration and motivation as the keys to a productive corporate turnaround.

Given the long list of better-known Texas CEOs—and richer ones, such as multi-billionaire Michael Dell—why did Price Waterhouse select these three? Their accomplishments speak for themselves. Pfeiffer engineered Compaq’s $9.6 billion purchase of Digital Equipment—the largest takeover in the history of the computer industry—which, if the government approves it, would create the world’s number two computermaker. Lay has built Enron into one of the world’s largest natural gas and electricity companies, with $23 billion in assets. And after Kay took over a nose-diving Sky Chefs in 1991, he cut operating costs by $60 million and more than doubled the company’s profits in just three years.

As you might expect, Pfeiffer, Lay, and Kay are glad to have been included in the book, and they have some thoughts of their own as to what makes for a good CEO. Lay mentions “the very bright, creative and high-energy people I have been able to attract to the key positions around me.” And “a good CEO,” says Pfeiffer, “has the innate ability to anticipate the possible directions the future may take and knows how to embark on that direction without hesitation. A good CEO takes control of his or her destiny.”