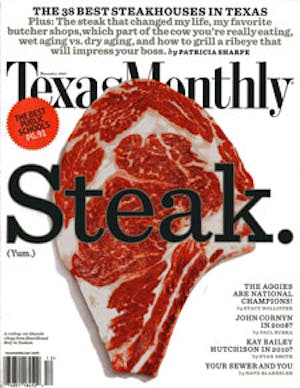 For a while there, the arrests were piling up more readily than rushing yardage. As every disenchanted Longhorns fan and gleeful rival booster (“Book ’Em, Horns!”) knows, UT’s biggest problem in 2007—well, until Kansas State came to town—was a spate of player lawlessness that started back in June and carried right into the season. Six players were arrested, for crimes ranging from driving while intoxicated and misdemeanor drug possession to aggravated robbery and tampering with evidence. With the NFL still reeling from its Summer of Vick, here came the Horns, blunts and beers in hand, adding college football to the sports dishonor roll. Suddenly, the sort of message-board high dudgeon usually reserved for one of Mack Brown’s assistants following a loss to Oklahoma was directed at the coach himself.

What particularly rankled was the fact that Brown received a lucrative contract extension right smack in the middle of the trouble—specifically, after the fourth arrest. The deal ensured that Brown would remain one of the country’s five highest-paid college football coaches, with a base compensation this year of $2.81 million, plus a full quiver of incentives. For example, in any given season, if only six of UT’s 85 scholarship football players get arrested, Brown pockets another $20,000. Lower that to five and he gets $30,000. From there, the bonus goes to $60,000 for three and $100,000 for two. If but a single Longhorn spends the night in jail? $150,000.

Okay, I totally made that up. And yet, if a mere 50 percent of UT’s football players follow through on the most basic purpose of attending college—earning a degree—Brown gets $20,000. It’s hard to say which side of that equation is sillier: that 50 percent is actually a goal the program has to incentivize (the graduation rate for incoming UT football players between 1997 to 2000 was just 42 percent) or that the incentive is so paltry. Sure, the payoff grows at every five-point increment, topping out at $150,000 if 75 percent of his athletes graduate (since 2000, the overall UT rate is 77 percent). But if his team wins a national championship, Brown gets three times that. Priorities.

Which is why it seems to me that the fans who cried foul over a few arrests were just choosing the easy way to blow off steam. The fact that we can’t seem to educate our student-athletes is a much bigger failure than the DUIs and drug use, which in some ways merely serve as a reminder that the heroes of Royal-Memorial are just like any other college kid trying to make it home from Sixth Street. No die-hard fan even feigns disgust at UT football’s academic showing. Or Oklahoma’s, for that matter (in a not-so-remarkable coincidence, the Big 12’s two best football teams also have the Big 12’s two lowest graduation rates for football players). Yes, the arrests are lamentable, and undoubtedly, the standard of behavior for athletes with football scholarships ought to be higher than the standard of behavior for the average student. But that’s mostly because the standards for them are lower when it comes to everything else.

That was the argument made by first-year Stanford University head coach Jim Harbaugh when he informed the San Francisco Examiner that he wanted “scholar-athletes” rather than student-athletes and that “other schools which have good academic reputations have ways to get borderline athletes in and keep them in.” Harbaugh didn’t hesitate to include his own alma mater, the University of Michigan, among that group. “I came in there, wanted to be a history major, and I was told early on in my freshman year that I shouldn’t be,” he told the Ann Arbor News. When Harbaugh first opened his mouth in May, his comments got about as much national play as Ralph Nader’s future presidential plans—until Michigan coach Lloyd Carr was asked about them three months later, just before the football season started. Then his heresy was treated like Ron Paul’s opinion on Iraq. Carr characterized Harbaugh’s comments as “elitist,” “arrogant,” and “self-serving.” He never did say they were horsepucky.

Texas was recently recognized by the American Football Coaches Association, which uses a different yardstick than the NCAA, for graduating more than 70 percent of its players who entered school in 2001. And UT’s 2005 national championship team had 51 players with GPAs of 3.0 or higher. But how many of them really took the same scholastic journey as their classmates? In a recent series for the Austin American-Statesman, John Maher reported that just 13 of the 107 athletes (in all sports) admitted to UT this year were in the top 10 percent of their high school class, compared with 71 percent of all in-state undergraduates. And whether you cite the AFCA’s findings or the NCAA’s, the standard of measurement allows six years for athletes to complete their degrees.

That’s not to say that coaches and athletic directors aren’t seriously devoted to educating athletes. The football teams at schools like Stanford, Vanderbilt, and Duke, where graduation rates are regularly between 90 and 95 percent, might even live up to the Greco-Roman ideal of body, mind, and spirit. Just don’t make me attend their bowl games (when they even get to one). Earning a degree while playing college football is like having child care at work—it’s an admirable perk, and employers who provide it are to be congratulated. But it’s not the purpose of the company. College sports programs have basically evolved into freestanding corporations.

UT athletics reportedly has a 2007 budget of more than $100 million. That’s more than what some NFL teams spend on player salaries, but no one’s writing Jerry Jones a check to help him upgrade the leg-press machines. Theoretically, money pours in to UT because donations are 80 percent tax deductible, but I’m not so sure it’s the write-off that matters most. Call me a sucker, but I believe alums pull out their checkbooks for the love: the good feeling of helping out the alma mater, the nostalgia for their own bygone college days, the ability to tell themselves they’re making life a little better for the student-athlete. We all know college football is about as innocent as Lindsay Lohan, but that’s why it really is a religion—faith conquers all when we come together every Saturday as fans, alums, and members of the tribe. That’s the value of the UT brand. The business of college sports is to help its fans forget that it’s a business.