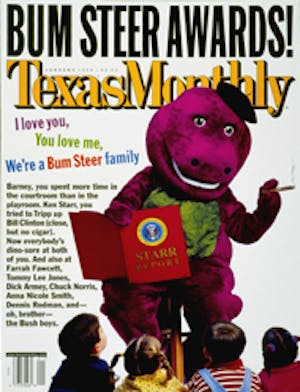 IN THE EIGHTIES THERE WAS Dallas, with J.R. and Sue Ellen trying to get their hands on more money in Big D. Now there is Austin, with four housemates—Monica, Steve, Dustin, and Karen—struggling to make ends meet in Slacker City. The plots aren’t the only things that are different, however: Austin is an online soap opera, so you can’t watch it on television. But you can see it on the Internet whenever you want and as often as you want. So much for setting the timer on the VCR.

Austin premiered in the summer of 1997 and is the brainchild of 38-year-old producer Rob Campanell and his 46-year-old business partner Jay Ashcraft. They launched InterneTV (www.internetv. com)—based in, you guessed it, Austin—in February 1997. Although they were the first to use a technology known as streaming video to show film trailers, film shorts, and music videos on the Net, the two entrepreneurs were eager to distance themselves from the competition by creating original programming as well. “I viewed a few of the text-and-pictures soaps when they began to flourish in ’95,” says Campanell, “but they couldn’t convey emotion. I knew we could do a Web soap better with streaming video.”

Austin is one of the few soaps on the Net that use this technology; most others (Lost Elvis Diaries, About Schuyler Falls: A Soap Opera, 101 Hollywood Blvd) still rely on photos and text. How does it work? The scenes are shot on video, which then must be digitized, encoded, and uploaded to InterneTV’s Web server. Normally, an entire video file is sent to a viewer all at once, which could take up to twenty minutes to download one minute of video, but with streaming video, parts of the file are sent one right after the other, cutting down the wait to less than ten seconds. All that’s necessary to watch it is a computer with a Pentium or K6 processor, a sound card, and a plug-in such as RealVideo or VivoActive, which can be downloaded from the Web. Campanell, however, is quick to point out that Internet streaming video is still in its infancy: “This stage is similar to the way television was in the forties—a small screen and poor image quality.” Viewers must adjust to the format of a two- by three-inch screen, which also affects the way the scenes are shot. Courtney Hopkin, a 21-year-old UT journalism senior who played Megan, Dustin’s teenage girlfriend, says the filming was unnatural. “It was hard to act jittery around a guy that I was supposed to have this big crush on when I was close enough to count his eyelashes,” she explains.

Nonetheless, the series has been so successful—Entertainment Weekly hailed it as one of the most appealing online soaps—that InterneTV has developed two new ones: Chemical Generation, a series about rave culture that debuted in December, and Bartenders, a comedy revolving around the service staff at an Austin alternative rock club, which just wrapped filming and should be online in March. Success, of course, is relative. Campanell and Ashcraft continue to provide the funding for InterneTV, but after Bartenders is out of the production stage, they plan to focus more on the business side, maybe bringing in investors and a management team. “I think what makes Net soaps different from the TV soaps is that the characters in the Net soaps can be your friends and neighbors,” says Campanell, “and it gives the viewers a look into a small subculture from different cities around the world.”