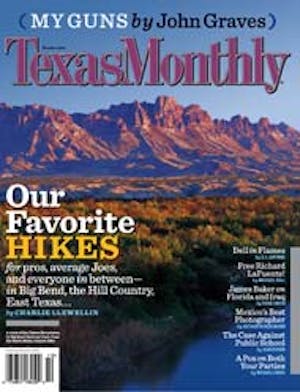 SOME BIBLE CLASSES OPT FOR A bird’s-eye view, resting content with extracting the main facts and dominant lessons from the text at hand. Others prefer the worm’s-eye approach, working dutifully through each individual verse. At Houston’s Congregation Emanu El, a Reform synagogue with 2,150 families, Senior Rabbi Roy A. Walter leads a small group whose approach makes the worm seem like a soaring eagle. The story of Joseph (Genesis 37 and 39—50), one of the most familiar in the Bible, explains how the children of Israel got to Egypt, leading eventually to the defining event in the history of Israel and Judaism, the Exodus and return to the homeland of Canaan. A rich narrative with memorable twists and subplots, it is well worth extended study. Still, I was a bit surprised to find out that, after nearly two years, the class had covered only six of the thirteen chapters. I soon learned why.

For more than 25 years, a Saturday morning class at Emanu El has devoted itself to the detailed study of the Torah (Genesis, Exodus, Leviticus, Numbers, and Deuteronomy), moving through all five books every 5 or 6 years. Recently the group decided to study the Joseph story by following an approach similar to that of traditional rabbinic scholars, drawing not only on the text but also on more than a thousand years of commentary by noted rabbis, to see how earlier understandings were elaborated, altered, or discarded. The result is a fascinating mixture of reverence for both Scripture and tradition, understood in the light of modern biblical scholarship and undertaken with sheer pleasure in rigorous intellectual exercise and palpable delight in mind-boggling detail.

On the morning of my visit, an eclectic group of five men and eight women of varying ages and mien assembled at a long table in a large classroom. Most were dressed casually, some in shorts and sneakers. Two of the men wore kippot, but another sported a University of Texas Longhorns cap, indicative of a different brand of Texas piety. Rabbi Walter, a tall, neatly bearded man whose somewhat aloof appearance is softened by a lively, informal manner and quick sense of humor, sat at the head of the table and led the discussion but did not try to dominate it.

To prepare for the class, Rabbi Walter had chosen ten notable rabbinic scholars, ranging from eleventh-century Rashi to twentieth-century Benno Jacob, each of whom had produced a commentary on Genesis. He had then arranged and personally typed their comments on each verse in chronological order, a pedagogical contribution he acknowledged to have been extraordinarily time-consuming and finger-numbing. In addition to these shared materials, contained in thick notebooks, some members of the class had brought their own modern commentaries.

After the Hebrew prayer traditionally spoken before undertaking study of the Torah—in translation, “Blessed are You, our eternal God, ruler of the Universe, who sanctifies us by His commandments, commanding us to engage in the words of Torah”—we began with chapter 44, verse 2. As he would throughout the class, Rabbi Walter read the verse in Hebrew and English, after which members of the class would read the comment of the earliest rabbi, discuss it, then move to the next scholar, to see what he might add, subtract, or modify.

Unlike Orthodox Jews or fundamentalist and evangelical Christians, Reform Jews generally subscribe to the modern biblical scholarship that arose in nineteenth-century German theological schools and is dominant in “mainline” Christian seminaries and the religious-studies departments of non-evangelical colleges and universities. Though they believe that the Torah is divinely inspired, they do not think that either God or Moses wrote it; instead, it was assembled over centuries from several major oral and written traditions. As one modern commentator puts it, the book “is not by God but by a people” and should be read as “a book about humanity’s understanding of and experience with God.”

The class understands, however, that the rabbinic commentators regarded the text as the literal word of God, absolutely free of error. “God knows,” Rabbi Walter said of their conviction, “that God didn’t make a mistake, even if you and I think a mistake was made.” Beyond that, they considered “every phrase, every word, every letter” as important and there for a reason, reflected in their admonition to “turn it and turn it, for everything will be found in it.” As a result, they felt compelled to plumb it to its farthest depth. This conviction and compulsion could inspire attention to detail that would surely escape the casual reader. In discussing verse 3 (“With the first light of morning, the men were sent off with their pack animals”), the rabbis struggled with whether dawn was just breaking or had already fully arrived, with one noting that the relevant verb was “in the active mode of the passive conjugation,” an observation that drew laughter from the class.

At one point, when I read ahead and quietly pointed out to the man sitting next to me that Malbim, a nineteenth-century figure, seemed to have solved the problem in question, he looked at me blankly. I soon learned that “Rabbi’s Rule” is not to read ahead but to encounter the material in chronological order as our scholars had done, each working with detailed knowledge of what his predecessors had written, so that we might watch the interpretation develop through the centuries, just as they had.

Discussing the same verse, the thirteenth-century Bachya asserted that the first letters of a four-word phrase in the passage constitute the sacred tetragrammaton (YHWH, from which “Yahweh” is derived). He also argued that if the letters were read in reverse order, they meant “justice at work,” a construction that is similar to one in Genesis 11:9. This tortured exegesis caused great amusement, tempered by one woman’s amazement that Bachya could find another example of such a construction without the aid of a computer. “This guy,” she said, “knew his Torah.”

We followed the rabbis through a millennium of attention to verse 4 in similar manner as they tried to determine just what “far” meant in the phrase “They had just left the city and had not gone far” and why it mattered. The discussion usually stuck to the minutiae at hand but occasionally veered off into a contemporary application, as when a question of legal vulnerability raised by the text led to an exchange of examples of problems people had encountered with leases in New York City.

Clearly this collection of people, most of whom have been with the class since its beginning and appeared to be entirely familiar and comfortable with one another, enjoyed their modest attempt at re-creating a rabbinic exercise but also understood that its format and pace are not for everyone. The loudest laughter of the morning, and laughter was abundant, came as the class drew to a close and someone referred to a subject the group would encounter in verse 6. “Oh,” a woman responded, “we won’t be there for three months.”