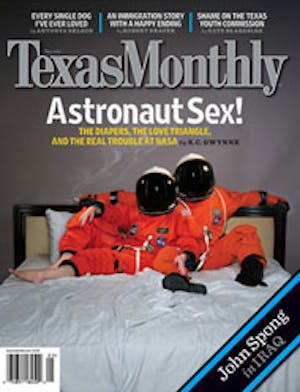 For this issue’s cover shoot, Jeff Minton boldly went where no photographer has gone before: astronauts in a very cozy situation that suggests—how shall we put it?—mission accomplished. “The image is pretty risky, and it’s pretty racy,” Minton says. “But it’s definitely entertaining.” Though it’s his first project for Texas Monthly, the Los Angeles–based artist is certainly no stranger to magazine work; he squeezed this interview in between projects for Details and the New York Times Magazine. And though the cover is lighthearted in tone, don’t think it wasn’t taken seriously. “We talked to experts to rent the exact space suit astronauts would wear in orbit,” Minton says. At $25,000 a pop, it’s a good thing that the gear was returned safely.

Lots of people have dog stories. But Antonya Nelson elevates the subject beyond an essay that’s simply sweet, funny, and sad: You feel her connection to her pets (“My Dog Days,”). “I had just spent the weekend at the kennel when the magazine contacted me,” she says. “It was nice to write something focused.” Nelson, who is best known for her fiction, moved to Texas in 2002 to teach at the University of Houston (she and her husband, the novelist Robert Boswell, share the Cullen Chair in Creative Writing in the English department). So when she’s not crafting short stories or playing with her dogs, she’s working hard in the classroom. Or, as she put it, with a writer’s flair, “preaching the religion of literature.”

Longtime readers of Texas Monthly no doubt miss the byline of Robert Draper, who left the magazine in 1997 to become a writer-at-large for GQ. But even with his Washington, D.C., address, he hasn’t forgotten his roots. In “Made in America”, he explores his family’s connection to illegal immigration. “About a year ago I was covering a town hall meeting for John McCain, and this person asked about the ‘twelve million parasites leeching the vitality out of America,’” Draper says. “I’d been digesting the immigration debate for years, but I kept coming back to personalizing the story.”