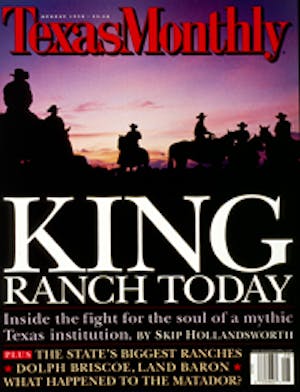 NO MATTER HOW BIG A MAN YOU THINK YOU ARE, this kind of pain will bring you to your knees,” says Robert Kimbrew, a plainspoken 56-year-old seed cleaner from the North Texas town of Oklaunion. Twelve years ago, Kimbrew’s daughter, Tina, was smothered to death by a friend who was strung out on drugs. “There were so many questions: What did Tina say that night? How long did it take for her to die? I wanted to find the man who did this to my girl, look him in the eye, and say, ‘Why the hell did you do this?’”

Through a fledgling program run by the Victim Services division of the Texas Department of Criminal Justice, Kimbrew was able to do just that. It is an unsettling scenario but one that will be recurring with increasing frequency now that the Victim Offender Mediation/Dialogue (VOM/D) program—whose goal is resolution, rather than retribution—is proving to be enormously beneficial to those still haunted by past crimes. “It took every ounce of energy and courage I had, but meeting Faryion Wardrip is what kept me sane,” explains Kimbrew. “After all these years, I was finally able to tell him about the horror he had brought into my life. And I saw the sincerity in his face when he said, ‘Robert, I am truly sorry.’”

Unlike the majority of mediation programs around the country, which primarily focus on juvenile offenders who have committed minor property crimes, VOM/D deals exclusively with cases involving extreme violence or sexual assault; it’s also the only program in the nation that allows victims’ families to meet with death row inmates. Participation by the offenders is voluntary—they are first required to admit guilt—and they receive nothing in return. Both the offenders and the victims’ family members go through extensive preparation with a trained mediator for months and sometimes years before sitting down for a one-time, mediated encounter.

Since it began four years ago, the program—which operates on a shoestring budget, with a paid staff of two—has been a labor of love for state coordinator David Doerfler. “This is a true personalization of the system,” explains 49-year-old Doerfler, who is a former minister. “We fill the need that the machine creates.” Indeed, there is currently a waiting list of more than three hundred individuals, which is why Doerfler has been reluctant to publicize the program. Because of limited time and resources, only ten encounters have taken place so far. But with twelve volunteers newly trained as mediators, sixty cases are now in progress, sixteen involving death row inmates.

These eye-opening encounters can have unexpected results. “I wanted to meet Mr. Kimbrew so I could tell him how sorry I was—that I live every day in memory of Tina,” 39-year-old Wardrip says of their wrenching five-and-a-half-hour conversation. “I was amazed when he reached out to shake my hand.”