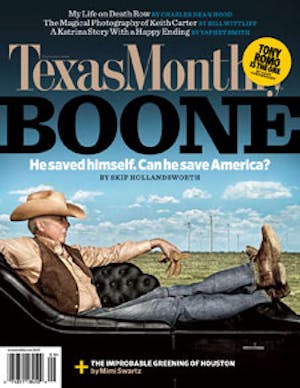 The New York Times named the author’s first novel, Prep, one of 2005’s ten best books; its successor, The Man of My Dreams, was a national best-seller. Her newest, American Wife, draws inspiration from the life of Laura Bush, though the author asserts that Wisconsinite Alice Blackwell is not a doppelgänger for the first lady. Readers may draw their own conclusions.

How closely did you hew to Laura Bush’s life?

I tried to explore what life could be like for someone with a moderate resemblance to her. I chose several large events in Mrs. Bush’s life to build the novel around—the tragic car accident when she was seventeen, her 12-week courtship with George, his struggles with alcohol, his being a wartime President—and made up just about everything else.

How long did it take to write?

Two years of working longer hours than I ever plan to work again. My earlier books took longer, but I was also freelancing and teaching, not just writing full-time. But it’s fun to feel really engaged in a project.

What can you tell us about your next book?

1) My husband and my editor think it sounds weird. 2) I haven’t written a word of it yet. And 3) It doesn’t have anything to do with anyone famous.

I’m not sure she’s unlikelier than any others. To tell the truth, I know far more about her than I do about other First Ladies, and I probably know the second most about Hillary Clinton. My impression is that Mrs. Bush was initially wary of her husband running for President, but I doubt she’s alone in that. Part of what made her story interesting to me were various details about her personality—that she’s such a serious reader, that she doesn’t love formal gatherings and would sometimes play outside with the dogs during parties at the Governor’s Mansion, that she’d fly Southwest around Texas to visit friends, and that many of her friends are women she went to elementary school with. There are tons more, but those are a few.

What sort of routines and rituals do you follow during the writing and editing process?

Although American Wife is my third novel, it’s the first one I wrote while writing full-time and the first one I conceived of as a whole before I started. I do brief outlines. When I’m revising, I read aloud to myself. I read this entire book out loud at least three times. This helps me absorb the material even after it’s become very familiar and to catch things like word repetition. Of course, this habit also drives my husband crazy.

Female protagonists anchor your first three novels—are you tempted to put a male front-and-center in a future novel?

Front-and-center is unlikely, but I have an idea for a novel which would be told from four viewpoints, and two would be male. I never consider gender when I’m picking a book to read for pleasure (though my favorite writer, the Canadian short story writer Alice Munro, is a woman). Gender differences can be fascinating, but I do think men and women have more in common than not.