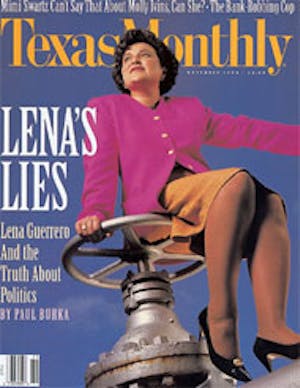 WHEN I WAS A SOPHOMORE AT THE University of Texas in 1977, my grandfather, a prominent Houston attorney, came to Austin to give a lecture to the university’s law students. After his speech, my grandfather told me he wanted to introduce me to someone. He led me toward a large biscuit-faced man who wore a tentlike suit and a grin that one might term bumpkinish. For a moment I wondered if he was someone my grandfather had once hired as a fishing guide. “Who is he?” I whispered. My grandfather murmured back, “His name is Ed Clark.” I asked what Ed Clark’s profession was. In fact, Clark was at that time service on UT’s Board of Regents; but that was no the reply my grandfather gave me. Instead he said, “He’s a very, very powerful man.”

Clark greeted us with a disarmingly high-pitched warble. Almost immediately he began to giggle, and I looked at the oversize cherub whose hand I was shaking and thought, “Powerful?” At that moment, my grandfather informed Clark that I was a fine young student who might want to attend law school. Without missing a beat, Clark nodded and said, “Well, you just send him our way. We’ll make sure he gets in.”

He spoke these works with the easy self-assurance of an El Paso weatherman predicting a dry spell. Looking up at Clark’s face, I now discerned a steadiness in his voice and a sort of elegant deviousness in his eyes. Then and there, I realized that what stood before me, buried beneath all that hayseed amiability, was the human essence of power. Leaving campus that afternoon, I had no doubt in my mind that if I wanted to go to law school at the University of Texas, Ed Clark would fix things for me.

That had been Clark’s reputation for nearly half a century in Texas politics: He got things done, usually without leaving so much as a fingerprint. If you were Governor Jimmy Allred in 1935 and you needed someone to massage a few recalcitrant anti-New Deal state legislators, you called on your chief political adviser, Ed Clark. If you owned a chain of stores and needed to get the Office of Price Administration off your back in 1943, you contacted attorney Ed Clark, who would then use his influence to see that a crony was hired in the OPA’s Austin branch. And if you were Lyndon Johnson and you needed any number of things—money from Brown and Root, votes in Duval County, an endorsement from an East Texas newspaper—then Ed Clark was the man to call.

From the thirties through the seventies, no one in Texas sustained power the way Edward Aubrey Clark did. His influence on the lives of Texans was and still is enormous: He spearheaded social policy reforms under the Allred administration., he orchestrated the taming of the Texas frontier by Brown and Root, and he groomed Lyndon Johnson for the White House. Yet it is a measure of the big man’s discreet ways that his death at the age of 86 this past September went almost unnoticed. The Dallas Morning News observed Clark’s passing with a small item on the obituary page. No members of the press attended his funeral in Austin, where Lady Bird Johnson and Ralph Yarborough mingled with educators and lawyers. No one recorded the overflow crowd in San Augustine’s Christ Church-Episcopal that gathered to pay its final respects to the town’s local hero. It was as if Ed Clark, the last of the big-time fixers, had tunneled his way out of a smoke-filled back room and vanished into the night.

Clark was both the product and the beneficiary of an era that saw Texas politics as a purely backstage event. While today’s archetypal dealmaker, James A. Baker III, derives much of his effectiveness from his mastery of the news media, Clark thrived in a climate where the press was ineffectual, the public knew nothing, and no one wasted any time fretting over whether ends justified means. “He was one of the true masters of Texas politics,” say LBJ biographer Robert A. Caro, “including the more pragmatic, hidden aspects of those politics, such as the raising and using of money.” In the nineties, far removed from the frontier realpolitik that defined his day, Clark’s mode of operation might seem peculiar. For all his clout, Clark genuinely viewed himself as a public servant who “gave much more than he got,” according to former Johnson press secretary George Christian. He was a Democrat who supported Republicans, a New Dealer who aided conservative businessmen, an LBJ ally who later defied the Johnson circle by becoming a crucial source for Caro. If in one moment Clark was raising funds behind closed doors to defeat his friend Ralph Yarborough in the 1954 and 1956 gubernatorial primaries, then in the next he was doing all he could to bolster Yarborough’s Senate campaign funds. The same fundraising skill that Clark used to help buy votes he would also apply to bolstering educational institutions. Ed Clark pulled his levers in one direction and then in the other and offered no apologies.

“Clark has to be put in time to be understood,” says Christian. “He was low-key, not flashy in the least; he wasn’t a media star. But he knew how to use power.” For those who found themselves on the wrong side of his maneuverings, Clark could appear ruthless—all the more so because his methods eluded public accountability. By age 25, the San Augustine lawyer had already been elected county attorney and subsequently defeated in a bid for district attorney—“A mandate from the people never to run again,” he liked to say. Thereafter Clark routinely waved off any encouragement to run for office by saying, “I’ve been a pallbearer at a lot of funerals, and I’ve never once seen anyone in the coffin who looked as good as the pallbearer.”

The son of a banker and the grandson of a state representative, Ed Clark served as Governor Allred’s legislative point man before forming his own law practice at 32. “Clark was a good lawyer,” says Christian, “but it was his political judgment and his contacts that built that law firm. He was close to just so many public officials.” Lucrative clients from the oil and gas, transportation, insurance, and construction industries gravitated toward Looney and Clark, transforming the smallish firm into one of the stat’s most powerful entities. Such clients came to rely on the well-connected Clark’s ability to take their money and wield it like a truncheon or a wet kiss, depending upon what was called for. Lobbying on behalf of his clients, Clark, according to Maury Maverick, Jr., “killed more good legislation than any other man in Texas: He’d go in to see a senator you thought was firm, and he’s be laughing and giggling. And he’d come out, and the senator would always be turned around.” In similar backstage fashion, Clark changed the course of history by facilitating in the ballot box stuffing in Duval County in the 1948 U.S. Senate primary. Without ever having to shake a voter’s hand, Ed Clark personally oversaw the demise of Governor Coke Stevenson and the rise of Lyndon Johnson.

That Clark and Johnson rose in parallel ascents is hardly surprising in light of the fact that, as Clark’s daughter, Leila Wynn puts it, “The basis of their friendship was helping each other get going.” Clark did not fear Johnson the way other Johnson loyalists did, and as the letters between the two illustrate, each made good use of the other. Frequently Clark send Johnson lists of important Texans he should get to know and told Johnson what to say and what not to say; the lawyer informed the politician whenever he was making enemies or gaining on an opponent or when he needed to send a gift to key constituents who were getting married. In return Clark requested numerous favors of Johnson—some of them personal (a land deal in Austin, bureaucratic assistance in opening a way-products plant), but most of them related to the wishes of clients (“Get the naval base for Corpus”; “Urge you to oppose passage of Senate Bill 963”; “Send the autographed photograph at once”).

Clark would tell Caro that he considered young Johnson “a comer” and therefore “bought a ticket” on him. When the long road ended at the White House, Clark’s position of influence became more formidable than ever. But a desire to serve his country overcame Clark in 1965, when he accepted an appointment as ambassador to Australia, a nation of enormous strategic importance during the Vietnam War. In electing to leave his catbird sear for Australia, Clark scripted his own slow decline of political power, while Johnson’s power reached it apex. Yet in the end it was Johnson who fell and Ed Clark who remained the pallbearer.

Upon returning to Texas in 1968, Clark busied himself with the 1970 Yarborough Senate campaign, Richard Nixon’s reelection effort in 1972, and Railroad Commission politics. In later years his attention turned to the University of Texas; later still, to his first love, Texas history. One by one the old war-horses died off. Soon there would be only Ed Clark, shuffling in his baggy attire through the posh offices of Clark, Thomas, Winters, and Newton, surrounded by acres of yuppie attorneys. He passed his final days quietly, spending time with his great-grandchildren and describing to Robert Caro how to alter voting tallies in the courthouse.

Five years before his death, Clark happened to be walking down Congress Avenue when he bumped into Ralph Yarborough. To the former senator the lawyer said, “You know how you used to always say that the ’56 election got stolen away from you? Well, guess what. So was the ’54 election.” And with that Ed Clark went off, giggling.