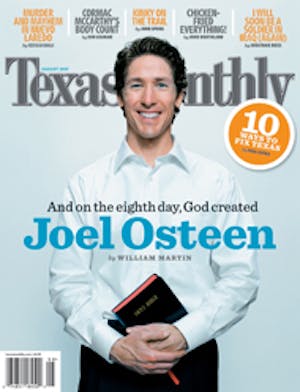 As a landowner of Devils River property for 75 years, I can assure you, Mr. Gwynne, that the only reason the Devils River is the pure and pristine river it is today is because of those ornery landowners, who were, and still are, trying their best to preserve for future generations what we have [“Run With the Devils,” June 2005]. Had it not been for those landowners, this jewel would be like most of the rest of the rivers in Texas: full of trash, beer cans, and Styrofoam cups. I know what John Q. Public does to rivers and the land. Believe me, I have cleaned up after him too many times.

Your mention of the sound of a bowling ball hitting the water was only a beaver expressing his displeasure at your having invaded his territory. You see, even wildlife have feelings!
J. K. Finegan
Kerrville

As I was reading “Happiness Is a Warm Gun” [June 2005], I had these pleasant visions of Ted Nugent and Tom DeLay going hunting and mistaking each other for a charging Cape buffalo or hippo.
Erwin Franke
Pahrump, Nevada

You are blessed with First Amendment rights that allow you to say whatever you want in your magazine, but using those rights to try and destroy another constitutional right is shortsighted on your part. If you, with the help of others, succeed in destroying the original intent of the founding fathers—that private citizens have the right to own firearms—can the destruction of other rights in the Bill of Rights be far behind?
Ken Adams
Dallas

Boone Pickens does want to sell water [Texas Monthly Talks, June 2005]. What you need to ask is, How much? How fast? When and if Mr. Pickens does start pumping out those water wells with a big-business attitude, the water table will fall faster and farther than it ever has, faster than Mother Nature can recharge the system. Then what? What will West Texans do when they have to buy his water? Oil is $50 a barrel now because of short supply. Will we pay $35 a gallon for water in a few years?

You know, maybe Boone Pickens is a hero who needs a statue of himself. Doesn’t even John Dillinger have a statue somewhere?
Clark Coburn
Midland

It won’t be long until they figure out how to charge us for breathing.
Sina Brush
Stanley, New Mexico

Thank you, Oscar Casares, for putting a humorous spin on your experiences growing up in a bilingual world [“Se Habla Español,” June 2005]. My parents’ decision to speak only English in our household was based on the fact that there were hardly any other Spanish-speaking people at the air bases I grew up on. Your piece reminded me that I should not be so ashamed of not being able to speak Spanish. I was a product of my environment, where English was the only language I knew.
Maria L. Hernandez
San Antonio

Your cleverly titled hatred of Tom DeLay on the cover [“Sleazy Does It! Take the Tom DeLay Ethics Test,” June 2005] has only fueled my forgiveness of his many shortcomings.
Ron Moran
Houston

Tom DeLay is no saint—he’s just a politician. I await your next article bringing to light the Democrats’ unethical political scapegoat.
Brent Johnson
Spring

Surely there must be some way to honor someone who has brought international attention to Texas and given new meaning to the word “sleazy.” Oh, wait. There is. It’s called “recall.”
Claude M. Gruener
Austin