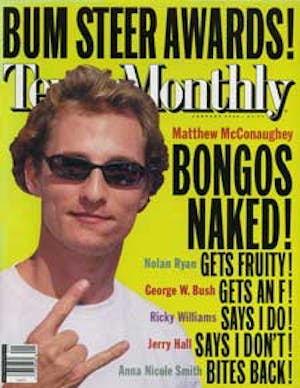 Doug Sahm was my hero. I knew it from the moment I heard the strains of “She’s About a Mover” blaring over the AM radio in 1965. Both the song and the band that recorded it, the Sir Douglas Quintet, were marketed to the world as a product of the British Invasion, but it sounded suspiciously like Texas. A subsequent radio hit, 1969’s “Mendocino,” was a pop confection in the same vein; notwithstanding Augie Meyers’ Vox organ, it celebrated the psychedelic movement busting out of San Francisco, but it too sounded like Texas. Two years later, the back-to-the-roots album The Return of Doug Saldaña—whose cover featured longhaired Doug in a cowboy hat, a bottle of Big Red in hand—signaled to Texans in exile that it was okay to come back home, that we wouldn’t get our asses kicked for looking or being different. A cover story by Chet Flippo in Rolling Stone about Sir Doug holding court at Soap Creek Saloon, a funky roadhouse outside of Austin, was the last straw. I packed up my belongings, left Minneapolis (where I was living at the time), bypassed my hometown of Fort Worth, and headed straight for Central Texas.

He had been a child prodigy, singing “Teardrops in My Heart” on radio station KMAC in his native San Antonio at the tender age of five. He learned to play guitar on a triple-neck steel guitar and proceeded to master the fiddle, the mandolin, the bass, the drums, and the bajo sexto, the twelve-stringed centerpiece of the sound commonly known as Tex-Mex. He sat in with Bob Wills, Ernest Tubb, and Hank Thompson—Texas musicians who put the western in country and western. He matched T-Bone Walker note for note in blues guitar battles and quoted Guitar Slim from the get-go. Yet he was at home in a South Texas cantina and understood polka as the foundation of all things musical in Texas. One of his most memorable songs, “Chicano,” contained the line “Soy chicano” (“I’m Chicano”); the composition was so genuine and convincing that Chicanos covered it and made it into an anthem.

He was the grooviest of the groovies, a charter member of the Haight-Ashbury scene and the ultimate cosmic cowboy (he certainly looked the part, from his black cowboy hat and fancy rings to his tie-dyed shirt and pointy-toed boots). A teen sensation who cranked out a string of local rock and roll and R&B hits before graduating from Sam Houston High School, he became a pal of Bob Dylan’s and a running buddy of the Grateful Dead’s. And he was responsible for putting Austin music on the map. In 1972 veteran producer Jerry Wexler, who launched the careers of Ray Charles and Aretha Franklin, among others, came to Austin searching for Doug and that elusive quality known as Texas soul and wound up finding Willie Nelson too.

Doug played almost every venue that had a PA system, from Carnegie Hall to the Louisiana Hayride, from Disneyland to the Paradiso in Amsterdam. As much as he grew to hate the smoke and the cramped facilities, clubs were his element. Growing up in San Antonio in the late forties and early fifties, he got his education at places like the Eastwood Country Club and the Tiffany Lounge, soaking up every kind of sound that was being made at a time when live music was just about the only entertainment around. For the past 25 years, he was the one guy in Austin who could walk onto any stage and immediately blend in with whatever musical tribe was holding forth.

Doug had street cred. He was well-versed in the whole star trip that comes with hits, but he was also his own man: flaky, flighty, and impossible to pin down. He may have acted like a celebrity even when no one around him had the slightest clue who he was, but—unlike his peers—he erected no barriers between audience and performer; it was always just you and him. Too many times he’d materialize from out of nowhere at somebody else’s gig, sidle up beside you, and cup his hand over his mouth while leaning in close,making you feel like you were in on the conspiracy.

If not for Doug, Freddy Fender would still be fixing cars in Corpus Christi, Flaco Jiménez would still be the best-kept secret of the San Antonio barrios, and Roky Erickson would have never returned from the asylum to make another record. If not for him, I would never have met the colorful cast of characters from back home: Rocky Morales, the greatest sax player you never heard of; Jack Barber, the smooth bassist who really was a barber; and the whole crew of hepcats from El West Side—Mexican Americans who knew their Prima and all the blues that mattered. And, of course, there was Augie, Doug’s colleague, collaborator, Zen opposite, and sidekick for life.

Doug was all about a sense of place, expressed in songs from “Seguin” (“In Seguin, in Seguin, where things they are so mellow”) to “Nitty Gritty” (the first song that rhymed “Boston” with “Austin”). Last year’s “Get a Life,” in which he berated Austin’s new high-tech culture for its all-work-no-play ethic, offered the most astute commentary I’ve heard on that city’s evolution. He may have hated the Texas heat enough to spend summers in Arkansas, Northern California, Sweden, and British Columbia, but he couldn’t stay away for too long. He missed the enchiladas and the barbecue, grooving with the beautiful people—the good vibrations.

And he missed making beautiful music, which he was doing until the very end. His Tex-Mex supergroup, the Texas Tornados, had recently reformed and cut a new CD, Live From the Limo, Vol. 1. He was collaborating with his kids and Augie on another Sir Douglas Quintet album, and he had a whole record’s worth of hardcore country songs in the can (he was going to release them under the pseudonym he once used in Nashville: Wayne Douglas).

You just couldn’t get the guy out from behind a mike. For the past two years, he and I called the championship softball game that closed out South by Southwest, the music and media conference that has come to define Austin in the modern era. Baseball was Doug’s second love. I never enjoyed his company as much as I did when he was Dizzy Dean and I was Pee Wee Reese.

I had noticed a change in him recently: He was settling down. He’d become a health nut. He had a nice girlfriend in Wimberley named Debora Hanson. He confided to me he’d move out to the Hill Country if only there were enough good restaurants. “I need my Thai,” he rasped.

“Doug, you’ve become one of those yuppies you’ve been complaining about for the past ten years,” I kidded him.

One of the last times we spoke, he called from the VFW Hall in Wimberley, beckoning me to come out and play bingo.

I regret that I never was able to sit him down long enough to reflect and tell me his story (of course, tornados aren’t easy to pin down). The times I did interview him formally, I’d ask one question, he’d talk until the tape ran out, and then he would be gone.

The end came alone in a motel in Taos, New Mexico. He was burned out on Austin (again) and had told Ernie Durawa, his longtime drummer and childhood friend, that he was going so far away that the only way he could be found was to send a bird after him. For a guy who found satisfaction behind the wheel of his Cadillac, there isn’t a more beautiful road to travel than the one in New Mexico from Santa Fe to Taos through the Sangre de Cristo Mountains.

It doesn’t matter that his death wasn’t front-page news or that sales of his albums put him in the “minor regional artist” category. Doug was San Antonio. He was Austin. He was Texas. He was Texas soul. When you listened to him, you heard all that, which is why his passing marks not only the end of a life but also the end of an era.

Sir Doug used to say, “Either you get it or you don’t.” Well, I got it. I got it so good that nothing will ever be the same.