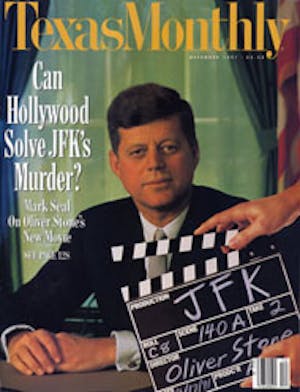 “Mexico Mike” Nelson’s day began, appropriately enough, deep in the heart of Mexico at the Villas Arqueologicas hotel, a low-key resort run by Club Med in the shadows of the Aztec pyramids of Teotihuacán. He had already revised the fee to the archaeological site, evaluated the parking lots, and ducked into a few restaurants. Now Nelson, as the chief travel logger for Sanborn’s Mexico Travelog, was headed on a circuitous route through the states of Hidalgo, Mexico, and Puebla.

But less than an hour after Nelson hit the road, he was hopelessly tangled in rush-hour traffic in Ecatepec de Morelos, an industrial suburb on the northeastern edge of Mexico City. No matter which direction he turned—when he could turn—he couldn’t locate the toll road to Pachuca, the capital city of Hidalgo. In one half-hour span, he dropped coins in the same toll booth three times. Muttering his whereabouts into a cassette recorder, he started to lose his cool, honking his horn and shouting epithets at cars and buses trying to cut him off as only the locals of Mexico City can. When he finally found the sign for the Pachuca toll road, he made one last comment into the recorder: “Okay. Forget all that.”

A traveler should never lose his cool in traffic, according to Sanborn’s Travelog, the guide given to motorists who buy Sanborn’s Mexico auto insurance. Since Mexico Mike writes the travelog, he should have remembered Rule of the Road number 10: “DO go with the •âow—especially in city traffic.” But his reaction to the bumper-to-bumper crawl was understandable, considering how hassle-free this road-logging trip had been until now. Two days earlier, Nelson was measuring the tunnel leading into the ghost town of Real de Catorce and determined that it is too tight for RVs. The day before, he had gotten a lead on Mexico’s largest orchid garden and sampled the waters of a renowned spa in San Miguel de Allende. “It’s kind of like being a truck driver,” he said. “Everybody thinks I’m on vacation when I’m doing these trips. But that jam was no picnic.”

Touring Mexico by highway can be a picnic as long as cultural differences, road conditions, and the fear of the unknown don’t get in the way. That’s why Dan Sanborn started writing the Travelog back in 1948 as a service for his insurance customers. The mile-by-mile description reassures drivers unfamiliar with Mexico that they’re on the right track and educates them about taboos such as driving at night. “Mexico is open range. I can personally attest that you can’t see a black cow at night,” Nelson says. Other advisories warn motorists to stay out of Mexico City on the day that vehicles with license plates ending in certain numbers are banned from the road—if you get caught, you’ll pay a fine. Otherwise, Nelson writes, be friendly, and the highway is a fine way to see Mexico.

Mike Nelson got hooked on the Travelog in 1957, when his family drove from the Valley to San Luis Potosí. Seven-year-old Mike was the navigator, and his bible was the loose-bound book with the yellow cover. “I knew then I wanted to be a writer, so I thought writing a book like this was a great way to make a living,” he said. “Dan Sanborn became my hero. I wanted to be like him.”

For the last four years, Nelson has been Dan, or, more specifically, the executive vice president in charge of publishing for Sanborn’s Mexico Insurance Services (Dan Sanborn is retired and lives in McAllen). That means Nelson drives nearly 25,000 miles of Mexico’s highways for a total of four months and spends the rest of the year updating the book, which is distributed to about 100,000 customers annually. “I introduce Mexico to people who wouldn’t go if they didn’t feel safe and secure. It’s as if Dan Sanborn was in the front seat with them,” Nelson said. “I try to think what’s going to save someone’s life. It’s important telling them to get in the right or left lane.”

Nelson tries to dispel the myths of bandits on the highway and crooked police. “I haven’t seen a bandit yet,” he observed. “And the only experiences I’ve had with cops have been when they’ve helped me. Not everyone’s one hundred percent honest, but the vast majority are.”

The payoff on this day was the view that unfolded outside the windshield. Amber waves of grain framed by rows of giant maguey cactus contrasted with an endless parade of rumbling trucks and noisy buses as well as proverbial peasants leading proverbial burros. The route went from spacious four-lane toll roads to bumpy, congested stretches of two-lane blacktop. Nelson kept a sharp eye out for topes, the speed bumps that slow traffic on major and secondary roads, noting every detail by scribbling into one of two pads, speaking into his tape recorder, or cuing his assistant logger.

Mexico Mike couldn’t be in a rush if he wanted to. His road vehicle, a 1980 VW Vanagon, negotiates steep inclines like an ancient Mack truck with emphysema and requires oil and transmission checks frequently enough for Nelson to become familiar with repair shops along the way. But those attributes simply force Nelson to adhere to Rule of the Road number 8: “DON’T get in a hurry.” Still, he comes prepared. A mechanic’s creeper and spare parts are stowed in the back. A pen on a string dangles around his neck, his back is comforted by two orthopedic cushions, and his shoulder belt has extra padding. The van’s control panel is augmented by a compass, an altimeter, a stopwatch, cassette tapes, and a Swedish odometer from Dan Sanborn himself.

Three hours after the morning traffic jam, Mexico Mike approached a highway junction marked by three restaurants. Nelson stopped at one, La Posta—done up like a rustic hunting lodge—long enough to enjoy a pleasant meal of rabbit mojo de ajo, quail eggs, and coffee. Afterwards, a chat with the owner led to a descrip-tion of the owner’s hometown of Pahuatlán, thirty miles distant in Hidalgo. The land there was muy divina, he said, marked with waterfalls and lush forests.

It sounded intriguing enough for Nelson to make an unscheduled detour. After Nelson backtracked and tooled through ten miles of verdant pastures and a settlement named Honey, the road twisted to reveal a stunning vista of a deep valley below steep, craggy peaks high enough to catch the clouds. In the hour it took to drive the next fifteen miles, the scenery changed dramatically from mountainsides of tall, cool pines to tropical slopes choked with banana plants.

Finally, at Pahuatlán, the asphalt gave way to cobblestones surrounded by whitewashed buildings with red-tiled roofs. Nelson inspected the town’s two hotels; dropped into an artisan’s shop, where he bought some paper made by Nahautl Indians; and inquired about the number of foreigners who visit. He concluded that the place was romantic enough to spend more time in with the right companion. But because the shadows were growing longer, he wanted to push on. He had heard of sulfur springs near Huauchinango, thirty miles east. True to his calling, he had to check it out.