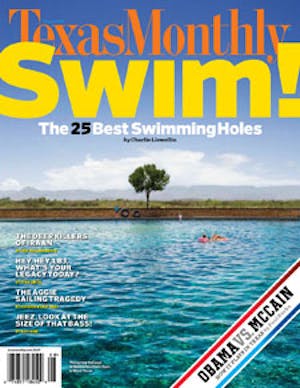 1. Take a stroll along the shady stretch of the LADY BIRD LAKE HIKE AND BIKE TRAIL that extends east of Interstate 35. (Town Lake, as most Texans know it, was renamed last year after the first lady who helped beautify it.) This section is just as pretty as the trail that runs west of the interstate, but it’s free of the crowds. Comal at Festival Beach Rd.

2. MR. NATURAL serves up lard-free, vegetarian Mexican dishes—such as potato flautas and blue-corn gorditas stuffed with tofu—that are as tasty as they are good for you. Don’t miss the vegan desserts (sweet-potato empanadas, anyone?) and smoothies. You can even buy vitamins and take a yoga lesson or two. 1901 E. Cesar Chavez, 512-477-5228

3. Tucked behind a gate just off the railroad tracks, BREAKAWAY RECORDS isn’t exactly conspicuous. But the treasure trove of vintage vinyl LPs and 45’s makes it worth hunting down. The inventory includes everything from sixties songbirds like Marianne Faithfull to garage-rock legends like the Sonics. 1704 E. Fifth, Ste. 105; 512-538-0174

4. An oasis of calm, BIG RED SUN is part nursery, part upscale gift store, part landscape designer. The xeriscaped garden outside boasts an array of succulents and beautiful planters. Inside the quirky green bungalow are locally made children’s clothes, knickknacks, and even a few chirping parakeets (the birds, alas, are not for sale). 1102 E. Cesar Chavez, 512-480-0688

6. Need a caffeine fix? PROGRESS serves up the best espresso on this side of Austin. The hip, modern space, which overlooks the railroad tracks and downtown, is a great place to cool your heels. The menu features tasty, sophisticated sandwiches, like BLT panini and Brie melts, as well as beer and wine. 500 San Marcos, 512-493-0963

7. The stately, white-columned FRENCH LEGATION MUSEUM dates back to the days of the Republic of Texas, when it served as the residence of France’s chargé d’affaires. The so-called French Embassy is decorated with nineteenth-century antiques, but the green, rolling grounds are the highlight of the visit. 802 San Marcos, 512-472-8180

8. The divine brunch at BLUE DAHLIA BISTRO includes daily specials, such as basil-flecked frittatas and smoked trout, as well as artisanal cheeses and complex breads (such as crusty olive-rosemary) that are locally made. Nothing is more satisfying than the tart, fresh-squeezed lemonade garnished with mint leaves. 1115 E. Eleventh, 512-542-9542

9. There’s no inside seating at EAST SIDE PIES, but this tiny neighborhood pizza joint has superlative slices. If you can’t land one of the tables outside, do what the locals do: Eat in your car. We recommend the Girther, which is topped with Gorgonzola, roasted onions, avocado, and—on request—bacon. 1401 Rosewood Ave., 512-524-0933

10. BOGGY CREEK FARM is a working organic farm whose1840’s farmhouse is one of the city’s oldest surviving homes. Fresh eggs, goat’s-milk ice cream, bison jerky, and seasonal vegetables, such as heirloom tomatoes, okra, and arugula, are sold on Wednesdays and Saturdays from 9 a.m. to 1 p.m. 3414 Lyons Rd., boggycreekfarm.com