Elisa Jimenez didn’t start out as a fashion designer. The 34-year-old El Paso native, who is the daughter of sculptor Luis Jimenez, set out for New York City in the early nineties to pursue her interest in sculpture and performance art. In 1995, she says, “I wore a dress I had made to a party, and this woman liked it. I said, ‘I’m always trying to make money. Come to my studio and I’ll design one for you.’” Four years later, working out of her Hell’s Kitchen apartment, she’s making dresses for celebrity clients like Courtney Love, Cher, and Parker Posey, and her fashion shows frequently grace the stages of New York Fashion Week. Don’t look for her creations at your local mall, however: Jimenez prefers sewing directly onto your body. Potential customers have to leave a message at SoHo’s Holly Solomon Gallery, and Jimenez calls back to make an appointment. She knows she’s making extra work for herself, but insists it’s worth the trouble. “I get the immediate gratification of someone telling me, ‘This makes me feel great.’” 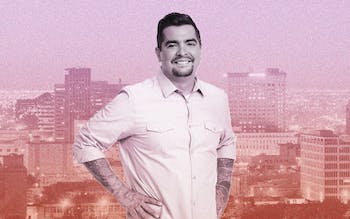