AR-15 – n.  The famous—some might say infamous—rifle that’s a civilian version of the M16. Contrary to what you’ve heard, the “AR” doesn’t stand for “assault rifle” but “ArmaLite Rifle,” after the company that developed the weapon, though many manufacturers now produce variants of it.

Magazine – n.  The thing that holds your ammo. It’s often incorrectly referred to as a “clip.” Magazines are those rectangular-shaped, spring-loaded ammunition holders that you see people sliding into guns. A clip is an entirely different contraption for feeding cartridges into a firearm.

Revolver – n.  A handgun with a revolving cylinder that can fire multiple rounds without reloading. The term usually refers to a handgun, though not all handguns are revolvers. Samuel Colt famously patented his design in 1836.

Semiautomatic – adj.  Describes a firearm that discharges one round when the trigger is squeezed. This is quite different from automatic weapons, which discharge multiple rounds with each trigger pull and are highly restricted in the United States. 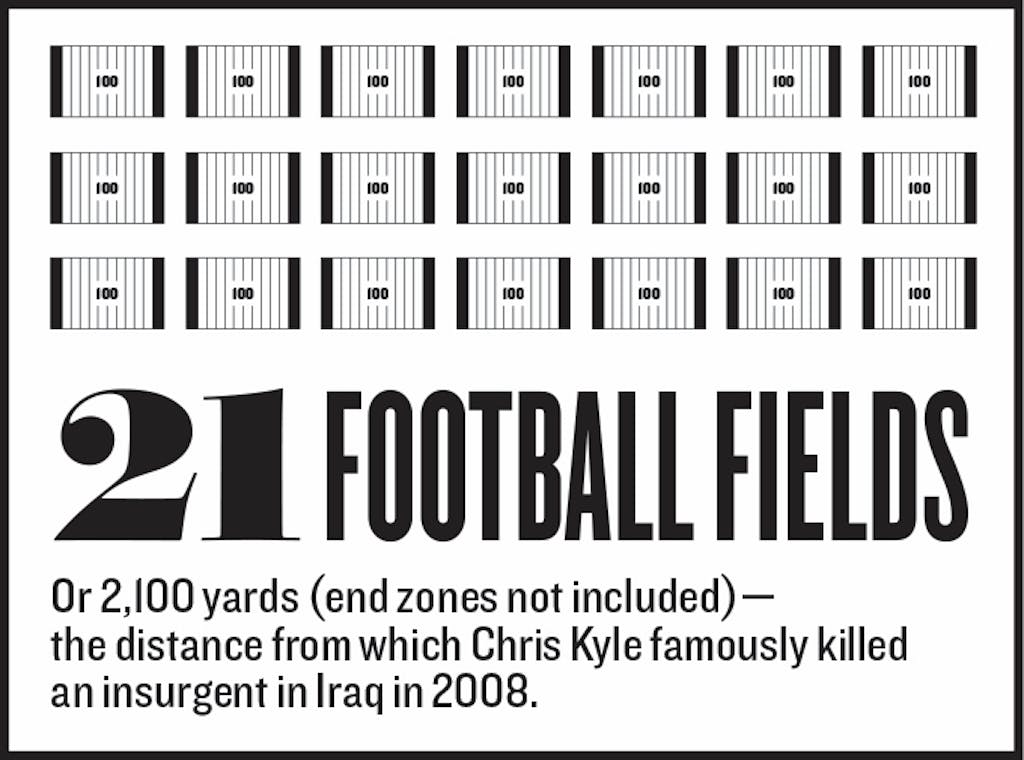 $15 Billion
Estimated annual impact from hunting and fishing in Texas.

27
Number of children shot to death per year in Harris County between 2011 and 2014. Gun deaths are now the second-leading cause of accidental child deaths, behind car accidents.

7
Number of muscles you use to pull a trigger. 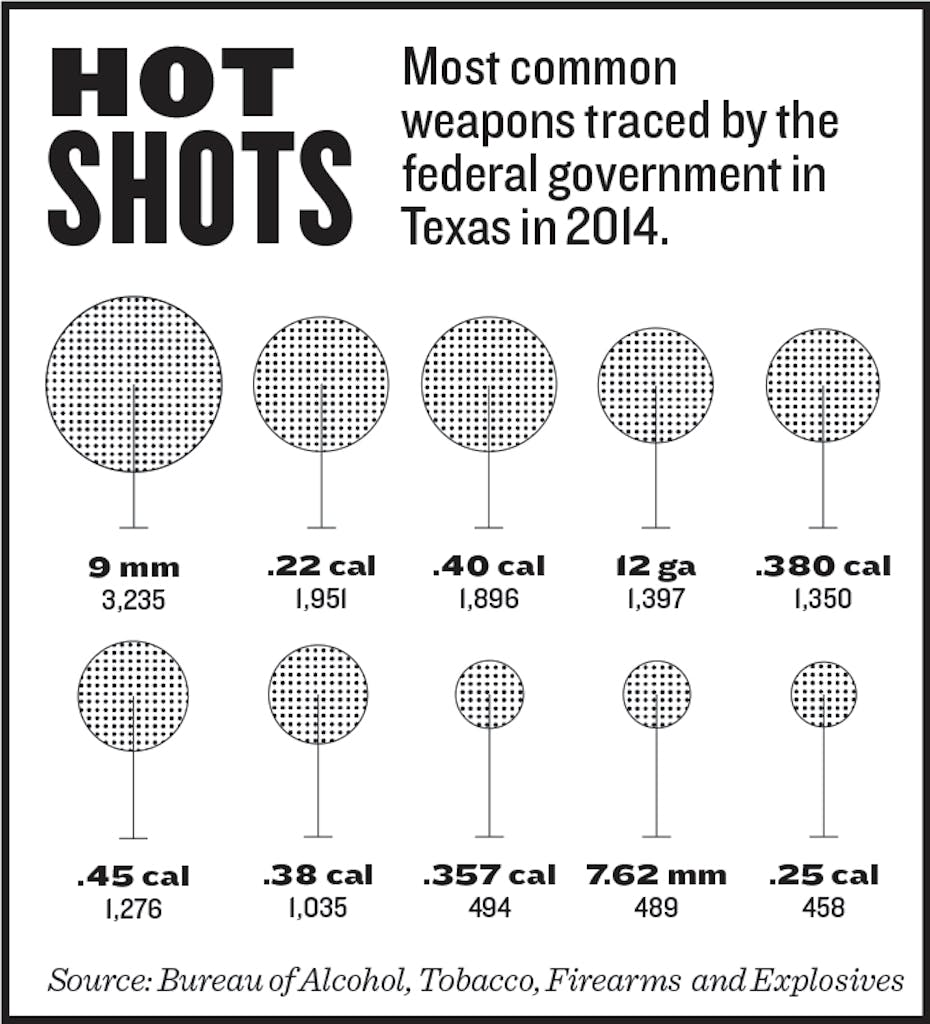 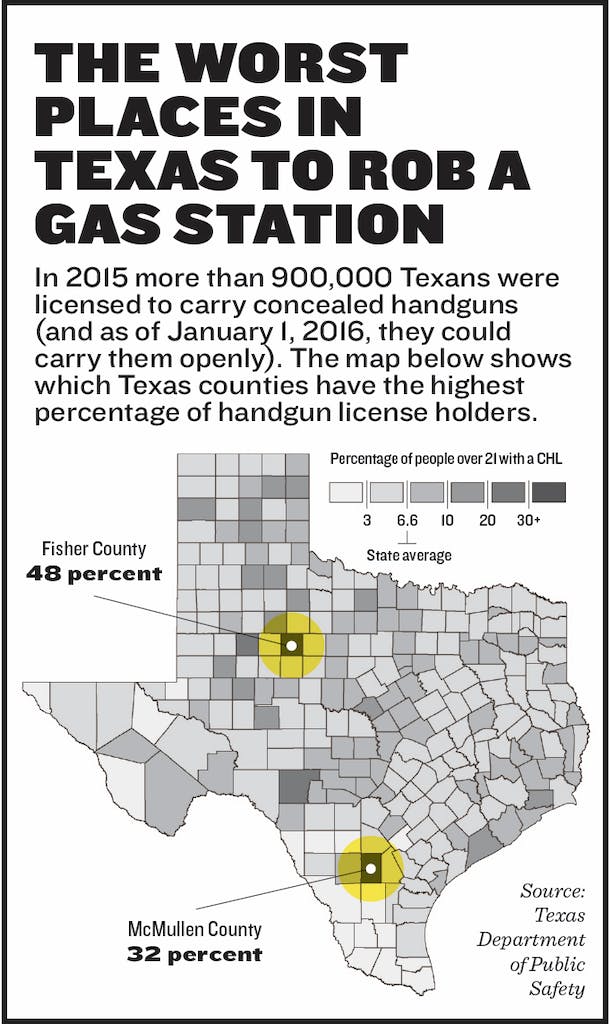 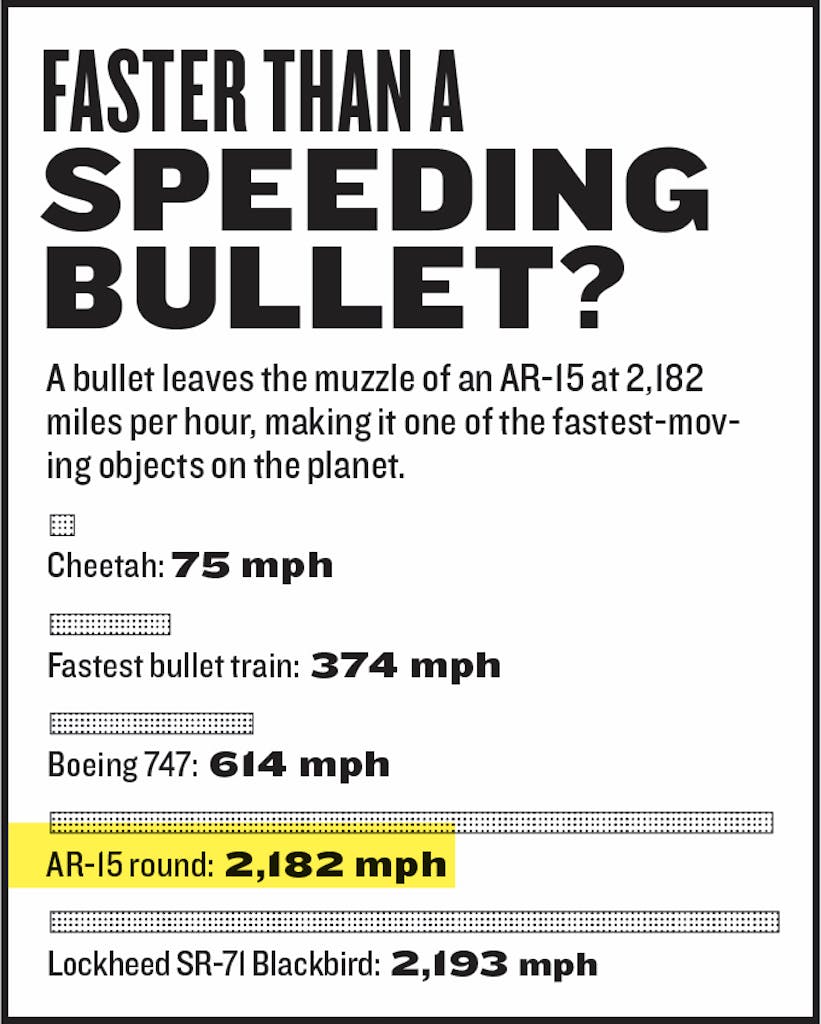 A LOOK AT FAMOUS GUNS IN TEXAS HISTORY 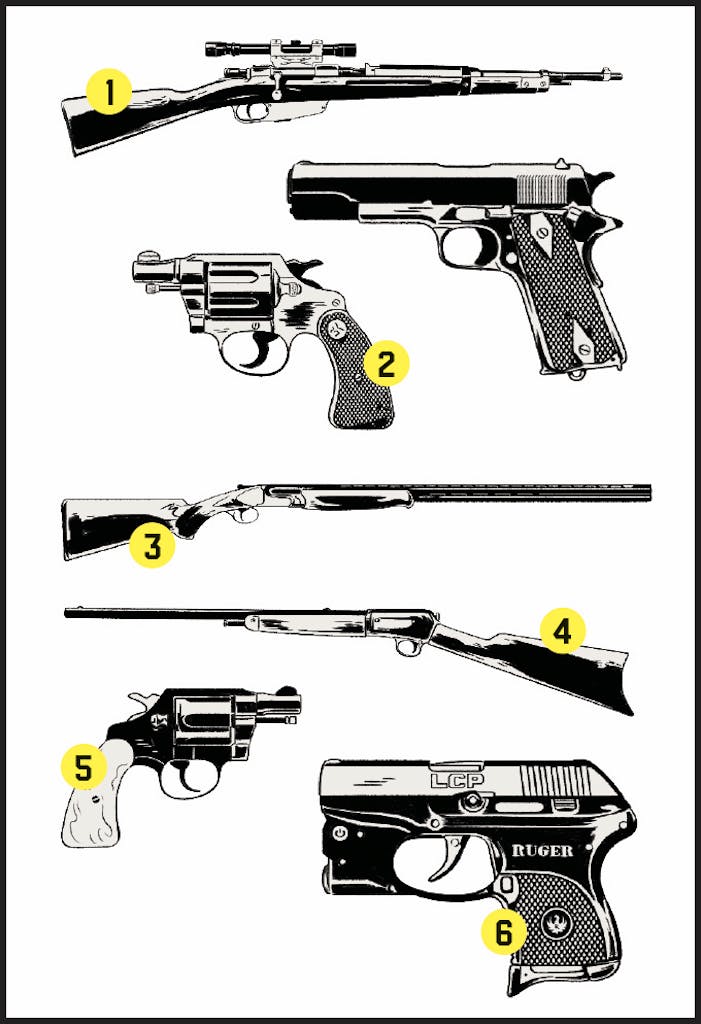 1. Oswald’s Rifle
On March 12, 1963, Lee Harvey Oswald ordered a surplus Italian carbine from an ad in the American Rifleman for $19.95 plus shipping. The Carcano M91/38 he received was manufactured for only one year, 1940. The rifle is now stored in the National Archives; the Sixth Floor Museum in Dallas has a replica.

2. Bonnie and Clyde’s Pistols
After the outlaws’ deaths, in 1934, Clyde Barrow’s Colt 1911 .45 and Bonnie Parker’s snub-nosed .38, which she had taped to her inner thigh, were given to famed Texas Ranger Frank Hamer, who had led the manhunt. In 2012 the guns were auctioned off to an anonymous Texas collector for more than $504,000.

3. Dick Cheney’s Shotgun
The shot heard round the late-night circuit. On February 11, 2006, the sitting vice president accidentally shot attorney Harry Whittington in the face while they hunted quail on the Armstrong Ranch, in South Texas. Whittington recovered, but the fate of the gun was never made public.

4. Toepperwein’s Winchester
In 1907 Texas sharpshooter Ad Toepperwein set a world record by firing at 72,500 tossed blocks of wood with Winchester Model 1903 .22-caliber rifles and hitting all but 9 of them.

5. The Gun that Shot J.R.
Perhaps the most famous gun in recent Texas history is a prop: the revolver used to shoot J. R. Ewing in the 1980 Dallas cliffhanger. It’s on display at the Southfork Ranch, near Dallas.

6. Rick Perry’s Coyote Killer
The former governor claimed in 2010 to have used his .380 laser-sighted Ruger pistol to kill a coyote that was threatening his dog. Ruger later released a version of the gun dubbed the Coyote Special.

AND INSIDE A WINCHESTER MODEL 70

The iconic Winchester Model 70 was first produced in 1936 and has long been known as the “rifleman’s rifle.” A key to its popularity is the controlled way the bolt feeds a round into the chamber. When a shooter closes the rifle’s bolt, the claw extractor snaps firmly onto the cartridge and smoothly guides it into the chamber. After the rifle is fired and the shooter opens the bolt, the claw extractor—as seen on this 1940’s model—pulls the empty cartridge case from the chamber until the case is ejected from the gun. Winchester altered this design in 1964, a change that proved so unpopular that the company later resurrected the “pre-1964” Winchester M70. 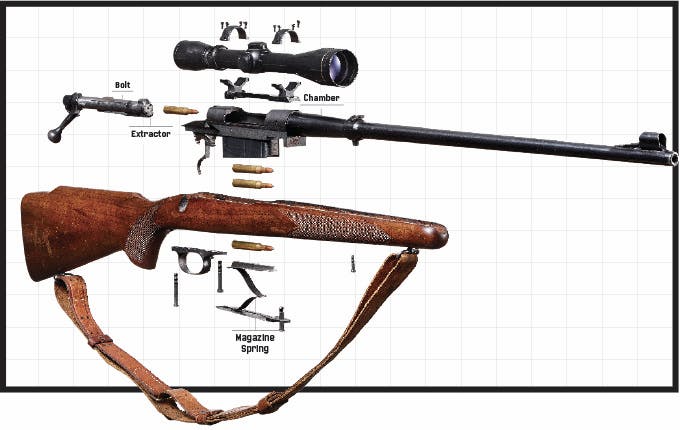 Firearm purchases—as measured by FBI background checks—increased 137 percent in Texas between 2000 and 2016. People weren’t buying significantly more guns for hunting (the number of hunting licenses has increased only slightly) or in response to crime (total incidents of violent and property crime have declined) or terrorism (Texans didn’t buy more guns immediately after 9/11). The spike in gun purchases began in 2008, during the financial crisis and Obama’s presidential campaign, and continued through 2013, the year following Obama’s reelection and the mass shooting in Newton, Connecticut.