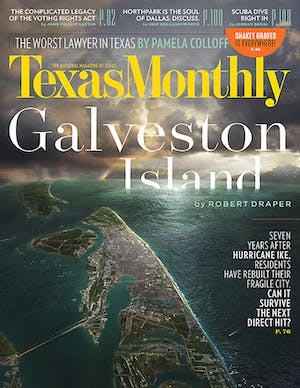 The U.S. Census Bureau’s recent release of its annual population estimates held no particular surprises for Texas—we’re big and we’re getting bigger. But according to the bureau’s snapshot of where we were as of last July, growth in our state isn’t evenly distributed: the counties that already had the most people—those dominated by cities and suburbs—are growing the fastest, and the rural counties, which have the fewest people, are growing more slowly (or, in many cases, shrinking). As a result, the decades-long shift in Texas’s identity from a rural state to an urban one is experiencing a profound acceleration, as we can begin to grasp by studying this map, which shows what Texas would look like if each county were represented by its population, rather than its landmass.

Between July 2013 and July 2014, Sterling’s population grew 8.9 percent, making it the second-fastest-growing county in the country. Well, sort of. As of 2013 Sterling had an estimated population of 1,230; that 8.9 percent figure reflects a modest gain of 109 people. Still, that’s a big leap for a state where many rural counties are on the decline. Chalk it up to Sterling County’s location in the Permian Basin, home to much of our recent oil boom—and looming oil bust.

The nation’s least-populous county is also the nation’s fastest-shrinking county. Loving, named for trail driver Oliver Loving, went from 103 people in 2013 to 86 last year, a 16.5 percent decline. If things break just right, though, it may soon be displaced at the bottom by Hawaii’s Kalawao County (population 89), former site of an “isolation settlement” that housed people with leprosy. No new residents are allowed.

North Texas’s twelve-county mega-region added more than 130,000 residents in one year—that’s basically everyone who lives in Waco, trying to get into Pecan Lodge for lunch. Leading the way: Denton County, which saw a 3.3 percent increase, to more than 750,000 people. In 1970, Denton County had a population of 75,000—one tenth of what it has today.

Harris County, the state’s largest county by far, added more people than any other county in the country. But a lot of the action is in the suburbs: percentage-wise, neighboring Fort Bend County is the nation’s fastest-growing “largest” county (those with a population of 250,000 or more). Montgomery County, to the north, is a close second.