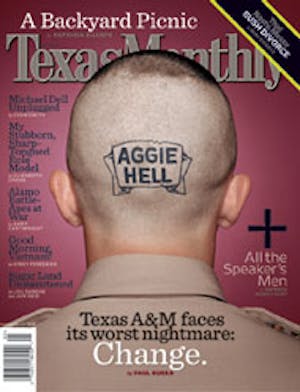 OF ALL CONTEMPORARY TEXAS WRITERS, no one shines brighter in the pantheon of Lone Star lit than John Graves. Why this should be so is less a matter of critical exegesis than one of conviction, of belief. The reputation, the legend, the legacy, all derive from one book, Goodbye to a River, published in 1960 and continuously in print ever since. The work arrived at a propitious moment in Texas letters; the old guard of Dobie, Webb, and Bedichek was about to fade from the scene, and Graves’s narrative about a canoe trip down a stretch of the Brazos River seemed to mark both the summation and the end of something: the land-centered ethic of Old Texas. In this one book, Graves combined Webb’s interest in history, Bedichek’s in nature, and Dobie’s in folklore into a seamless whole that was greater, and more literary, than any single work by any one of the celebrated triumvirate.

Readers responded to Goodbye to a River on several levels. They liked its elegiac tone. They liked the avuncular wisdom that Graves sought to impart. They liked the book’s muted ecological thrust (Graves is no bomb-thrower, no Edward Abbey). Graves’s ruminative manner conveyed a sense of validation to Texans with a strong and often sentimental attachment to the land, whether they were “old farts” (a favorite Graves term) who owned a few acres and liked to putter around on them, absentee owners who romanticized how wonderful it was on a farm or ranch when they were growing up, or the folks, mostly male, who liked to hunt and fish. The book was also just literary enough, stuffed as it is with allusions to Shakespeare, Shelley, Yeats, Thoreau, and Hemingway, to make readers feel that they were getting a dose of culture along with their wing shots and string of crappie.

Graves was forty when Goodbye to a River came out, and before it there had been a long foreground of false starts in fiction, most of which grew out of his experiences in Europe in the fifties, before he discovered his true subject, hardscrabble Texas. Katherine Anne Porter, Gertrude Beasley, William Humphrey, and William Goyen each lived in Europe for a time, and they all wrote their best work about a remembered Texas past. Graves’s process of artistic discovery took a different path, however, as he demonstrates in his newest offering, Myself and Strangers: A Memoir of Apprenticeship (Alfred A. Knopf). It is a backward glance at his life, from his middle-class upbringing in Fort Worth (his father was a clothing merchant) through a two-and-a-half-year period spent abroad searching, he says, for himself and for his voice. Although he seems to have found himself in Europe, he did not find his voice until he came home to Texas, where he embraced a deeply rooted provincialism—the stony ground and Southwestern ethos of the small landholder—that has formed the basis of his best work.

Before getting to the expatriate years, the book touches on Graves’s education at Rice University; his service in the Marine Corps during World War II (he was blinded in one eye on Saipan); nine months spent in Mexico sharpening his Spanish; more education, at Columbia University; a four-year marriage; and even a brief stint teaching freshman English at the University of Texas. His description of that soul-destroying labor helps explain the desire to travel: “A basically miserable, overworked, underpaid period, teaching indifferent freshmen and walking around full of guilt about the ungraded themes sticking out of my coat pockets. I was getting no writing done, nor was our marriage in the best of shape.”

The book moves through this material rapidly and then lingers—for too long, some readers will think—on the years in Spain, with side trips to London and Paris; it concentrates on “the time between the autumns of 1951 and 1956,” which included the key years of his experience abroad. Famous expatriate memoirs like Hemingway’s A Moveable Feast are accessible to us because of the company the author kept. Hemingway met everybody, and everybody he met was important: Stein, Picasso, Fitzgerald, Dos Passos, Joyce—almost the entire roll call of modernism. Most memoirs of Paris in the twenties have the same cast of great characters, people who profoundly mattered because they were defining the twentieth century in painting, sculpture, literature.

But the people Graves met in the fifties were, by and large, nobodies. He says so himself, describing one group of “fellow countrymen” as “aimless, upper class, usually charming, heavy drinkers. They are really nobodies.” Not that there weren’t great figures to be glimpsed from a distance. The distance was self-imposed; Graves could have met them, but something in him kept him from doing so. In the case of Hemingway, his reticence is understandable. Once, in Pamplona in 1953, he observed Hemingway at a table, surrounded by admirers. Papa was having a drink and demonstrating how to handle a bullfighting cape, but Graves felt that the celebrated author had probably become someone who would disappoint him. Graves was under the spell of Hemingway’s early work—what American writer who went to Spain in 1953 was not?

On Majorca, that island of “hard-drinking idlers” where Graves lingered fretfully for most of a year, he could have met a great writer who lived there and bore the same last name. Robert Graves, the British poet, novelist, and memoirist, had written a stellar autobiography, Goodbye to All That, whose success had enabled him to leave England and take up residence on Majorca. But the book of Robert’s that John admired was The White Goddess, a study of the essential role of the female consciousness as muse and inspiration. (Everybody admired it; Sylvia Plath and Ted Hughes virtually used it as a marriage manual.) Yet the American Graves never tried to make contact with the English Graves. 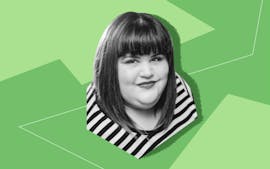 Eventually Graves grew so tired of the wastrel Americans on Majorca that he wrote a highly critical sketch about them that was published in Holiday magazine. It was the only thing he ever wrote in anger, he says, and he felt bad about it. Some of those who recognized themselves in the article never forgave him (and he has not seen fit in the years since to reprint the piece). During all this time in Europe, Graves was trying to write. He wrote two types of stories: “one for them and one for me”—”them” being the slick magazines that paid well, the “one for me” being the literary stuff that was slower to sell (and write) and earned little or no money. Graves would eventually concentrate all his efforts on the literary side, but even then he felt a lack. He needed a book; only that would provide the “status” he required. This is one of the recurrent themes in the journal that Graves kept during his years abroad. “Time is moving along and I am farting around, writing halfassedly on insignificant stuff,” he berates himself in December 1953, and then, the next month: “A book, a book, a book is what I need to write.”

The book he pinned his hopes on back then never happened. He worked on a novel called “A Speckled Horse” in 1955 and 1956 while living in Spain and then in Sag Harbor, New York, but his agent didn’t like it. Graves thinks the book was “quite masculine” for his agent’s sensibility, which he describes as “gentle, civilized, and effete,” but on the basis of the segment he chose to reprint in A John Graves Reader, the agent seems to have been right. The prose sometimes sounds like an entry in the “bad Hemingway” contest: “Without his willing it Hill’s eyes flicked down the length of her body and back up again to her face momentarily, and something moved far down inside him. It had been a long time. He knew that she knew the thing had moved inside of him, and knew that she liked that.”

The memoir bogs down when Graves quotes verbatim from his journal, which he does fairly frequently. One entry from August 5, 1953, is typical: “Pepe’s troubles. Had supper with him this evening, and after he had told me his worries we had good talk about a little of everything. I like him better and better.” Pepe is José Mut, a friend notable for nothing else to command our attention. And then there are the women. Graves describes a “purgative, jolly, and guiltless romp” with one Spanish woman and a prolonged affair with a French beauty “who was very good in bed.” So it goes in the easy latitudes of desire.

To be successful, journal entries have to be about famous people or be written with the burning intensity of deep anguish, like, say, those of Sylvia Plath. At times Graves’s entries are flat, like the ones all of us write when we travel: “Sitting in the bar Bellver at 10:30 a.m., waiting for your café con leche and croissants, checking the comically moral front page of the newspaper Baleares . . .” At some level he knows that his reliance on old material and obscure actors in a personal drama from fifty years ago is a problem, and so he calls upon “Old John” to comment on what “Young John” was up to, but it’s not enough to overcome the datedness of the diary.

Yet there are quite a few moments of insight too. He describes, for example, the pleasure of reading John Houghton Allen’s Southwest, a book from Graves’s homeland published in 1952. It was a reminder that it might be possible to write about Texas, that perhaps the true places of the heart could be found there rather than in foreign climes.

By the fall of 1955 Graves had returned stateside, and by the “drouth-breaking autumn of 1957,” he was on the Brazos River, storing up images and experiences. The book that resulted was, he writes in his memoir, a “liberation” from the self-doubt of the years in Spain. With this act of personal repatriation, Graves had come full circle.

In retrospect, his career seems to mark the end of a certain tradition in Texas letters favoring essays and sketches about the natural world. Stephen Harrigan has moved away from such nonfiction to write novels and screenplays; Rick Bass has been so long in Montana that he rarely writes of Texas anymore; and I can’t think of anyone else following the Bedichek-Graves trail.

The fact that Texas is overwhelmingly urban breeds less and less connection with the land. Still, Texans harry the corn-fed deer for trophy antlers, tee it up and feel close to God, go tubing in loud groups down the Guadalupe—all activities of the kind that Graves deplores in Goodbye to a River as “the climactic ejaculation of city tensions.” Nature lovers have always been hard on those of us in cities pent.