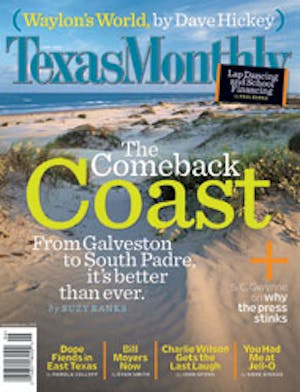 texasmonthly.com: How did you first hear about the methamphetamine labs in East Texas? Where did the idea for the story originate?

Pamela Colloff: When I was in Jasper last fall, working on a story about the aftermath of the James Byrd Jr. murder, I kept hearing about meth. Whenever I was in East Texas reporting other stories, I’d hear about meth. So I decided to make some calls this spring to see what I could find out.

texasmonthly.com: How did the severity of the situation compare with your expectations?

PC: I realized that the problem was much worse than I had thought when I first talked to Cheri Quick, the supervisor of Child Protective Services for Angelina County. She told me that a third of her caseload was related to meth. That’s when I knew this was a story.

texasmonthly.com: How did you first get in touch with investigator Kent Graham? How willing was he to grant you access for your story?

PC: I spent a lot of time traveling around the Piney Woods, talking to people in law enforcement and at drug treatment centers. I kept hearing about Kent from people in rehab, addicts who had been arrested by him. I didn’t meet with him until about halfway through my reporting. I was really impressed with Kent and the sheer number of labs that he had discovered. I asked him if he would let me tag along with him and his partner Kim Courtney, and they were both gracious and kind enough to agree.

texasmonthly.com: Were you at all concerned that listing ingredients would result in copycat meth cookers?

PC: No, because there’s more detailed information already on the Internet that explains exactly how to cook it. Anyone who knows how to use Google can find some sort of meth recipe.

texasmonthly.com: It sounds like you were actually at the scene of one of the raids. What was that like?

PC: I was outside the house when the raid took place, so I did not see the action inside. The ten-year-old boy whom I wrote about was brought out into the yard during the initial minutes of the raid. I saw a lot of him and his reactions to what was taking place. That was very difficult to watch.

texasmonthly.com: Did you feel any sense of danger while involving yourself so deeply in this topic?

PC: Honestly, no. Kent and Kim are the ones with dangerous jobs. And with so many reporters over in Iraq, this seemed like a very safe assignment.

texasmonthly.com: Why do you think East Texas is such a breeding ground for these labs?

PC: Meth is a serious problem in most rural, white communities around Texas where the economy is in decline. I think the problem is compounded in East Texas because the area is isolated, relatively poor, and because there’s a long history of moonshining.

texasmonthly.com: How much did you know about the drug prior to writing the story? What were your best sources of information?

PC: A friend of mine, Karen Olsson, who’s a writer-at-large for Texas Monthly, wrote a fantastic article about meth a few years ago for the Texas Observer. Since then, I’ve read a few newspaper stories here and there about the drug. Other than that, the best sources of information were the meth users themselves.

texasmonthly.com: How open were the meth users in discussing their situations? Did they show any sense of regret or remorse?

PC: I was grateful that people were so open. Talking about their addiction—whether it was in group therapy sessions or with other addicts—is part of the recovery process. Most people expressed regret that they had lost so many years to meth and that it had caused so much pain in their families. But they also talked about how much they enjoyed doing the drug when they were using it.

texasmonthly.com: What was the most shocking or disturbing thing you discovered while working on this story?

PC: I was continually shocked by was how whole families could be consumed by meth. I’ve always assumed that drugs didn’t really cross generational lines within a family. The idea that a grandmother, mother, and daughter might all be using meth was pretty mind-boggling at first.

texasmonthly.com: Is there anything else you would like to add?

PC: I wish there were more resources for addicts who want to get treatment for their addiction. There are very few recovery centers in East Texas that are available to people who don’t have a lot of money. There are centers in Lufkin and Marshall with long waiting lists, and that’s about it. I think that we’d have a much better chance of getting a handle on the meth problem if there were more options for addicts who want to get better.