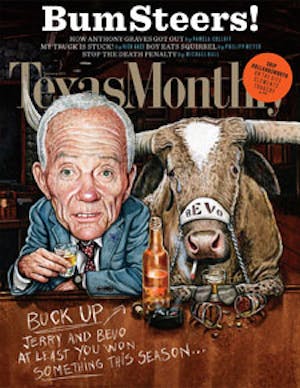 During the Christmas season of 1940, the Library of Congress held a four-day commemoration of the seventy-fifth anniversary of the proclamation of the Thirteenth Amendment, which abolished slavery. Folklorist Alan Lomax, of Austin—the 25-year-old son of the legendary folklorist and scholar John A. Lomax—served as impresario of a session called “Reels and Work Songs.” In his comments, Alan spoke eloquently about the importance of juba dancing, Brer Rabbit stories, and railroad work songs in American culture. He also described the horrors of Jim Crow. “I hope you will be ready now to listen to Negro songs with different ears,” he instructed the audience. “These songs are full of love for people, they are lonely for people, and they are full of hunger for gentleness and kindness in this world. These songs rose up out of slavery, out of misery.”

Sitting in the audience was Alan’s 73-year-old father. A Lone Star nationalist of conservative temperament who had long been troubled by his progeny’s left-wing politics, John Lomax was enraged over Alan’s unflinching evocation of racism. “You have disgraced the South!” father chastised son when the program ended, thrusting his fist into the air for emphasis. (He was also incensed that another speaker on the program had told a story about how the great blues singer Bessie Smith died after an automobile crash because a whites-only hospital wouldn’t admit her. A white doctor, in fact, had treated her, to no avail. Though Alan was informed by his father that the story wasn’t true, he repeated it for decades to come.)

Despite these tensions, the Lomaxes were united in their unwavering belief that folk songs weren’t mummified artifacts of a bygone era but a living, breathing part of modernism. Outlaw ballads like “Stagolee” and heaven-sent spirituals like “On the Other Side of Jordan” were, according to both men, culturally resonant musical jewels. Posterity owes them much; voiceless people got a chance at immortality whenever a Lomax appeared on the scene with a tape recorder. “My father was fired from the University of Texas for recording those dirty old cowboy songs,” Alan once said. “Cowboys were low-down, flea-ridden, and boozing, so a guy who associated with them—even though he romanticized them a lot, as my father did—was looked down on.”

In 1996 John was the subject of an excellent biography, Last Cavalier: The Life and Times of John A. Lomax, that drew heavily on the Lomax papers housed at UT’s Dolph Briscoe Center for American History. But for the most part, Alan, whom Bob Dylan called a “missionary” for his work collecting folk songs, hasn’t been given his full historical due. This was a man, after all, who pretty much jump-started the recording careers of Muddy Waters, Leadbelly, and Woody Guthrie; recorded some of the first “world music”; and inspired the sixties folk music revival. Now, with the publication of Alan Lomax: The Man Who Recorded the World (Viking, $29.95), this intellectual deficit has been rectified. John Szwed, a professor of music and jazz studies at Columbia University and the author of biographies of Sun Ra and Miles Davis, has written a graceful and informative cradle-to-grave study that’s a perfect marriage of author and subject. (After graduating from UT, in 1936, Alan himself headed to Columbia University.)

Particularly exemplary is Szwed’s recounting of how Jelly Roll Morton—the New Orleans pianist and composer who claimed to have invented jazz—fell into Lomax’s orbit. In 1938 Morton was living in Washington, D.C., performing nightly at a little club known as the Music Box. Lomax, who was at the time working in the city and recording folk musicians for the Library of Congress, at first believed that Morton was too slick a figure to be included in his project. But once Morton sat down at a piano and started talking about his music and the early days of jazz, Lomax knew he had pure gold. “What ensued was a performance that lasted for over a month, a recitation of Homeric proportions, with Morton accompanying himself on a piano instead of a lyre,” Szwed writes. “It was the longest recording session anyone had ever tried.”

Though Lomax is best known for his work with musicians from the American South, no place was off-limits to him. He collected folk songs in locales as far-flung as Spain, Italy, Venezuela, Haiti, and the Bahamas, often with heavy equipment at his side. (Early on, he lugged around a five-hundred-pound recording machine; he was a stickler for high fidelity.) But one thing Szwed’s book makes clear, in striking detail, is that Texas was his symbolic home turf. (His best friend, in fact, was an old UT chum, the great storyteller and humorist John Henry Faulk.) There are stories in Alan Lomax about Lomax visiting a plantation near the Trinity River, where workers sang spirituals for him and his father; driving to Galveston to record stevedores; and collecting folk songs along the Mexican border. By amassing a plethora of different sounds, Lomax helped change the image of the Lone Star State from the domain of high-plains drifters to the home of blacks, Cajuns, Hispanics, and marginalized whites.

As Szwed makes clear, Lomax’s rejection of Texas’s image of itself began at an early age. He called the era of his childhood the “mauve decade” because all the houses in Austin had dark, heavily furnished interiors, with blinds drawn precisely two thirds the length of the window, as in Germany. He believed that the people who lived in these veiled homes were, in Szwed’s words, “hiding evil and hypocrisy,” and he more or less spent the rest of his life setting himself against them.

Much like his father, Lomax was something of a controversial figure at UT. As an undergraduate, he resigned from the Daily Texan when a piece he had written criticizing the pope’s stance on birth control was killed by the paper’s editor. And while other students went to Longhorn football games and postgame parties, Lomax spent his days visiting Austin’s black-owned record shops and the home of a blues guitarist named Ruby, recognizable for her mouth full of gold teeth. He was particularly floored by the music of Blind Willie Johnson, a Texas street musician known for his slide guitar playing and guttural vocals. According to -Szwed, Lomax carried around Johnson’s first record “wherever he went” and played it so often he wore it out. Lomax’s explanation for his obsessive behavior was a reminder that the ideology that infuriated his father so many years later was inspired by a profound emotional connection. “It wasn’t a matter of folklore,” Lomax said. “It was the way I felt.”

Kings of Colorado, David E. Hilton (Simon & Schuster, $24). Austin-area writer’s debut novel about four boys at a brutal reformatory school. Read an interview with the author. Read an excerpt. Buy it at amazon.com.

You Know When the Men Are Gone, Siobhan Fallon (Amy Einhorn Books, $23.95). Short stories about Army wives waiting for their men to return to Fort Hood. Buy it at amazon.com.