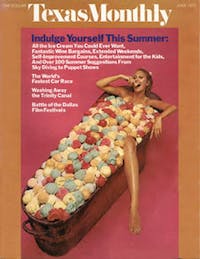 YOUR HISTORY BOOKS PROBABLY TOLD you that Nero fiddled while Rome burned; well, they were right. History books don’t lie, they just leave out the important facts. What they don’t tell you about the decadent Emperor was that he dropped his fiddle long enough to invent ice cream. His method was simple—special runners, probably called slaves, trucked in snow and ice from the Alps to the Emperor who covered it with wine or crushed fruit. Instant ice cream.

Although Nero declined and fell, ice cream did not. It flourished in Italy until 1600 when it was introduced to France by Marie de Medici when she traveled to marry King Henry IV. After all, she was expressly told to bring her ice cream makers or stay home. Despite the marriage, French ice cream remains inferior to Italian ice cream, which still is the best in the world.

If you’re not planning a trip to Italy or to the Northeast to visit the Deering Ice Cream Shops (probably the best in the United States), if you think that United Fruit (Baskin-Robbins) may be adding too many emulsifiers and stabilizers to their product, if you sit in Swensen’s lone outpost in Dallas wondering if you are in ice cream heaven, consider Mrs. Stickney’s (Deering’s) warning. “I’d hate to see the day when young people can’t tell the difference because they’ve never tasted good home-made ice cream.”

If you are one of the people Mrs. Stickney talks about, it’s high time to try making your own at home this summer. Then you’ll be prepared for the dark night of the soybean, the night when synthetic substitutes sneak undetected past your tastebuds, the night when Cool Whip follows the false trail set up by the substitutes, the night when you realize you can’t tell the difference between good and bad ice cream.

While frantically reaching for your nearest ice cream crank you can turn the occasion into the 125th or 127th anniversary of the great leap forward in ice cream technology—the invention of the ice cream churn by none other than an American woman, Nancy Johnson. Or you can celebrate the stealing and patenting of her idea two years later by William Young. At least he called it the Johnson Patent-Ice Cream Freezer. Small consolation; but you may make the decision about which anniversary to celebrate.

Ms. Johnson’s invention created the incomparable texture of ice cream we know today. Stendhal, after tasting his first hand-churned ice cream, was moved first to ecstasy and then to philosophy: “What a pity this isn’t a sin,” he said.

Unlike our pioneer ancestors, we don’t have to run out to the ice house and hope there is enough ice for the hand churn. Nor do we have to rely on a rare trip to New Orleans, like our more fortunate ancestors, to taste ice cream this summer. Anyway, all those affluent pioneers got to taste was Yankee ice, for New Orleans proprieters used Nero’s technique of running north for ice to store in their ice houses.

Today, however, you can reach into your own fridge for Texas ice, Texas cream, and pure flavorings. Nothing can compare to that. Moreover, although the very finest commercial equipment still provides for finishing off the ice cream by hand, electric-powered ice cream freezers make the arm-busting task of cranking obsolete. But if you can’t afford the price of a hand- or machine-powered freezer, rest easy, for you can still make ice cream in the trays of your refrigerator. Although the end product won’t be quite as rich or as smooth as that churned by a mixer, it will be all your own.

A custard made of cream, milk and eggs, cooked slightly and mixed with the desired flavorings, makes up the basic base for ice cream. Flavorings should be fresh. Remember that no vanilla tastes as good as crushed vanilla bean and that sweetener (whether sugar or honey) and flavoring should be stronger than usual, as freezing will mask the flavoring.

To begin, you need to know how to make a good vanilla, the base for most ice creams.

You also need to select a freezer, either hand or machine. They range in price from $10-$30. (If you can’t find one near home write to the following: The J .E. Porter Co., Ottawa, Illinois, 61350 or The Richmond Cedar Works Manufacturing Corp., 400 Bridge Street, Danville, Virginia, 24541.) The freezer churns and adds air to the custard mixture while it freezes. If you’ve ever left a milk bottle out on a freezing night and looked at it the next morning you’ll know that freezing will expand the basic ice cream mixture. The entire mixture expands by about a third because tiny air bubbles and small ice crystals are introduced into the mixture. The texture of the ice cream comes from the size of these bubbles and chunks of ice, so unless you have a yen for vanilla flavored hail, try to keep both the bubbles and the ice as small as possible.

The freezer itself is made up of a cranking mechanism, a metal can for the custard base, a dasher, which is only a fancy name for a paddle which performs the agitation, and last, a tub to surround the can and protect its contents from the ice and salt that freezes the ice cream.

1. Wash the can, cover and dasher, place in scalding water and cool. This is a good precaution since dairy products make the ideal home for the culture of bacteria.

2. Pour the chilled custard base into the can until approximately two-thirds full. You need to allow for expansion in the freezing process. Too much will overflow, too little will not freeze and whip properly.

3. Put the can in the tub, put the dasher in the can, cover the can and put the crank in place.

4. Now you can fill the tub with salt (rock salt is best) and crushed ice. The usual proportions are one pound of salt to six pounds of ice.

5. Start cranking. For hand cranking, start off slowly and turn faster when the freezing starts (after about 15 minutes of vigorous cranking). At this point it becomes hard to turn the crank because your muscles are out of shape and because the custard is turning into ice cream. For electric freezers consult your manufacturer’s instructions. Generally, unplug them when the motor sounds as tired as your arm would feel after 15 minutes of hand cranking. Your ear will let you know when the motor is about to stop.

6. Remember to place a pan to catch water from the melting ice that flows through the drain hole in the side of the tub. Keep the can covered with ice and salt at all times.

7. Carefully scrape ice and salt away from the can. Remove can and crank mechanism, wipe can free of salt and ice and remove dasher. Cover the frozen mixture with waxed paper, replace the cover and plug the hole.

8. Allow the ice cream to freeze for two to six hours. (Six hours lets it ripen properly, two will get you by.) Either place the can in the freezer of your refrigerator insulated in a towel, newspaper, or piece of carpet, or whatever, or empty the excess water from the tub and repack it to the rim with four parts of crushed ice to one part of rock salt and cover with insulation.

Common Problems With Freezing Your Own

You might find that your efforts turned out a mushy, grainy, or icy product. Before you turn in your crank and run off to your local store, consider:

1. You used too little salt. (Salt lowers the freezing temperature of water—that’s why Yankees throw it on their frozen roads to melt the ice).

2. Your ice is not crushed finely enough. (The smaller the better here, so that more surface area of ice comes in contact with the can.)

3. Your mixture is too sweet, so the freezing process is slowed down.

4. Your tub leaks. This problem should be obvious.

5. Your drain hole is clogged, whether with ice or something else, so some warm water manages to stay in the tub and warm up the can.

Recipes for a Freezer

1. Scald the milk and cream in a large saucepan. Add sugar and vanilla bean. Remove from heat.

2. In a separate bowl beat the yolks with two pinches of salt until foamy.

3. Slowly pour the scalded cream mixture into the egg yolks, stirring constantly. Pour back into saucepan. Return pan to low heat on stove.

4. Stir constantly until the mixture coats a metal spoon. If your knack is not too good, place the mixture over a double boiler. Pour through a sieve into a bowl and chill thoroughly. Over-cooking will curdle it.

For other flavors, add them to the basic vanilla mixture. Starred items are added just before the freezing process is finished. (Proportions for one gallon.)

Add one cup of chocolate syrup before you begin cranking the freezer. Or add four squares of unsweetened chocolate after step one in the basic vanilla procedure.

Recipes Without a Freezer

1. Cook cream and egg yolks over low heat or double boiler until thickened. Should coat a spoon.

3. Place in refrigerator tray, cover with foil, freeze until there is a solid rim of ice around the edge at least one inch wide.

4. Remove from tray, beat vigorously in a chilled bowl.

1. Cook sugar in water until it reaches 219 degrees on a candy thermometer. Remove from heat and cool to room temperature.

Now that you have the information and a few recipes, head for your kitchen. If you need statistical security for your foray, remember the Cornell University announcement that a person with average luck who ate ice cream daily would require only 100 million years to come down with a stomach ache. How much he or she would weigh, well, that’s another question.