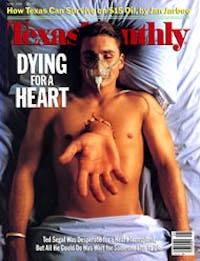 Only the prospect of the best show in Texas could have sent me creeping stealthily across a lonely pitch-black Colorado County prairie at 5:10 in the morning. Even so, as I switched off my flashlight to walk the last twenty yards to my observation blind—a converted Portacan fitted out with viewing portholes—I wondered if I had lost my mind. I had sworn, when I made my reservation with the Attwater’s Prairie Chicken National Wildlife Refuge near Eagle Lake, to enter the blind by 5:15 a.m. I had sworn to emerge only when the last prairie chicken was long gone from the ritual booming ground, one of fifteen on the refuge, where the males perform their elaborate mating dances every February, March, and April. The refuge folks had made it abundantly clear that this meant three to four hours inside my solitary cell, no cheating allowed. I slid open eight of the portholes and settled back in the windy dark, waiting.

What happened as dawn came up was powerful and strange. A deep, hollow sound like a troll blowing on a Coke bottle rolled in off the prairie. It was followed by another and another and another, punctuated with cackly wook-wooks and loud staccato rappings of the sort a too-short table leg might make drumming against the floor. Soon the mystical booms, endowed with an almost ventriloquial power on the level plain, surrounded the blind with such intensity that my hiding place seemed in danger of being borne away on a tide of sound. Philip Glass, I thought with a twinge of panic. Philip Glass would love this.

Eventually I began to make out the source of the clamor. Eight or nine ghostly, scuttering shapes, the males of this endangered race of prairie chickens found only in Texas, were engaged in serious guy behavior designed to attract the favorable notice of females. They flapped and hopped and faced each other down in scores of territorial high noons; they hunkered down and waggled and whined at each other like dogs. They transformed themselves in moments from unprepossessing, Clark Kent-ish birds to puffed-up samurai warriors; splayed tails erect, spread wing tips arched downward, pinnates furled up like crested headdresses, air sacs bulging orange in the first light. They strutted through their ancient booming routine with steps Michael Jackson might envy—a scurry forward, rapid foot-stomping choreographed with ballooning air sacs, then the boom itself, which lasts until the sacs deflate. Set smack in the middle of this furious posturing, I realized Bill Clements had been all too apt when he compared certain legislators to thumping prairie chickens.

Some chickens were cooler than others. The dominant males were easy to spot, in the same way one instinctively grasps that Mick Jagger has better moves than John Cougar Mellencamp. Occasionally a couple of female prairie chickens lurking in the taller cover would sidle onto the shorter-grass booming ground and give a couple of guys the once-over before skittering away. It’s a sobering fact of prairie chicken sex life that only a few dominant males do most of the breeding and that the notoriously picky hens are impervious to most of this frantic male display.

Perhaps an hour into the riveting spectacle, three killjoy marsh hawks began harassing the chickens, ultimately driving them off. Walking away, I turned once to look back. It was impossible to imagine that empty, placid bit of prairie as a seething arena. I felt as if I had been in a dream, a privileged voyeur transported to some lost continent to witness a secret tribal rite.

Nova Silvy, the state’s unofficial Mr. Prairie Chicken, knows the feeling. “Everyone should do it at least once,” maintains the Texas A&M biologist. Future generations of Texans may not get the chance. That’s because it’s always hell to be a groundnester, vulnerable to predators (“Skunks, snakes, everybody’s after them,” says Silvy) and to the weather (heavy spring rains can lay waste to a generation of fledglings). But to be a groundnester with a steadily shrinking habitat means double jeopardy: Where once millions of Attwater’s prairie chickens thrived from the Mississippi River to the Mexican border, now fewer than a thousand birds—squeezed out by rice farming and advancing brush—make do with 129,000 measly acres of remnant tallgrass prairie scattered in pockets along the Texas coast. Figure in a normal attrition rate of 59 percent, and you have a breed prone to sudden destruction.

The 8,000-acre Attwater’s refuge—one of only a few in the National Wildlife Refuge system dedicated to a single species—is a hedge against doom. Mowing, grazing, cyclical burning, crop cultivation, and aggressive beating back of the brush enhance the prairie for the refuge’s 156 chickens (down from 222 last year). But it’s still not enough. The Attwater’s Prairie Chicken Recovery Team, led by Silvy, estimates that to remove the birds from endangered or threatened status will take a population of 5,000 birds and 22,500 more acres of habitat. The most important step, says Silvy, is to establish a satellite refuge geographically separate from the one at Eagle Lake. The U.S. Fish and Wildlife Service has a site picked out near Victoria, but the option on it expires next year. Prying loose the funds to buy the new refuge is going to take some adroit politicking. Meanwhile, who’s going to tell the birds—a remarkable link to a vanished Texas landscape—to hang in there? Last year was damagingly wet; this year is problematically droughty. Says Silvy flatly, “If we had two or three bad years in a row, we could lose them all.”