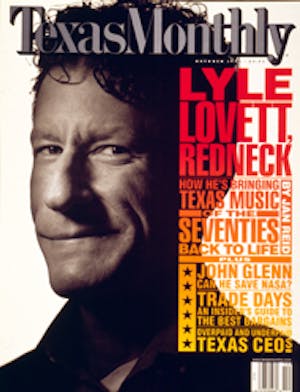 “The Presbyterian clergy . . . are violent, ambitious of power, and intolerant in politics as in religion.” Thomas Jefferson uttered those words way back in 1820, but they are very much on the minds of Fort Worth grandees John L. and Anne W. Marion, who were recently given a copy of the quote by a friend. The Marions do not feel quite so unfavorably disposed toward officials of the Presbyterian Church U.S.A., but at the moment there’s no love lost between them—and it all has to do with Georgia O’Keeffe.

As fans of the painter probably know, the Marions—he, the former chairman of Sotheby’s; she, a Tandy heiress—helped found the Georgia O’Keeffe Museum and Study Center in Santa Fe, which opened in July 1997. (The Burnett Foundation, a charitable organization created by Anne’s mother, Anne Burnett Tandy, donated nearly $10 million at the start of the museum project in keeping with the family’s longtime support of the arts.) So it came as no real surprise when, this July, the Marions made a bid to buy O’Keeffe’s home in Santa Fe from her heir Juan Hamilton and make it available to scholars. Although the home and the twelve acres on which it sits had been appraised at $735,000, the Marions offered $3 million, a nod to its historic value.

There was only one hitch: The home and the land on which it sits are surrounded on all sides by the 21,000-acre Ghost Ranch Conference Center, which is owned by the Presbyterian Church U.S.A. In 1987, when Hamilton inherited O’Keeffe’s property, he acquired four and a half additional acres from the church in exchange for the right of first refusal on any sale of the home and land. Initially, the Marions proposed to pay the church the not inconsiderable sum of $250,000 to relinquish that right, but church leaders declined, insisting they wanted to purchase the home themselves. “We decided it would be an enhancement to the programs already there,” says the Reverend Ed Craxton, the church’s associate director for Christian education. But within a few days, the church floated another idea: It would buy the house for $3 million but lease it for 99 years to the Marions, who would pay $4.8 million up front. The Marions said no. The church dropped the price to $4 million. Again, the Marions said no. (“It was try-it-on time,” says John Marion, who believes the church was only interested in making a buck—or bucks—off him and his wife, a charge Craxton denies.) In the interim, believing a deal with the church was unlikely, Hamilton proceeded with his plans to sell to the Marions, but on July 31 the church filed suit in state district court to prevent him from doing so.

After three weeks of negotiating, the parties finally reached an agreement in principle: The Marions would pay the church $350,000 to relinquish its right of first refusal. Several weeks passed as church leaders attempted to attach conditions to the agreement, including one prohibiting the building of any new structures on the property. But on September 4, they went ahead and signed the papers.  “They were getting in the way of our deal with the owner,” says Marion, who was more than a bit frustrated. “It’s his house. We agreed with Mr. Hamilton what we’re going to do. He’s the only one who should be able to have a say.”