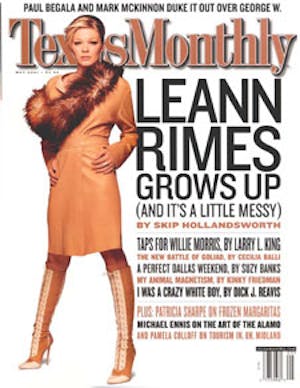 texasmonthly.com: How did the idea to do a story on Goliad come up? Whose idea was it?

CB: A source of one of Texas Monthlys editors alerted him of the developing controversy, and executive editor Paul Burka saw it as an opportunity to write about the larger issues of history and culture.

texasmonthly.com: Did you find writing about something that has been written about so much to be a terrific challenge? How did you approach your story to make it different from previous stories about Goliad?

CB: As it turned out, a lot of the journalistic pieces that have been written about Goliad in the recent past only offer historical facts but dont provide deeper analyses of the messy issues that lurk behind historyissues such as what it means, who writes it, how it is promoted. It was a little bit daunting to think that I was writing about such an important historical issue, but instead of stressing about how to make my story different, I just went directly to my sources and allowed them to do the talking. That is where the story emerged, and because it involved certain peoples lives, it was inherently unique.

texasmonthly.com: How did you research this story?

CB: The first thing I did was run to the nearest library and look up all of the books on Goliad and Texas history. Although I attended Texas public schools, I needed my own refresher course on the citys historical significance. I also looked up old articles, scanned through Goliad Web sites, and interviewed academics and other authorities over the phone. The most important aspect of the research was spending a weekend in Goliad and hanging out with my sources, who had done their own research on me before I even got there. Mr. Warzecha, the director of Presidio La Bahía, graciously allowed me to spend the night in the forts single guest quarters, and only when I walked out to the presidio grounds at midnight did I truly grasp the essence of that magnificent historical site.

CB: The most revealing thing I learned was about how group misunderstandings or animosities develop. I have read and thought a lot about race issues, but not until I spent time with my main sources did I come to grasp how two groupsregardless of which one is dominant politically, socially, or economicallycan both feel racially discriminated against. From the bully pulpit, it is easy to claim that one group has more of a right to complain, but that attitude doesnt consider the personal experiences and feelings that make the issue much more complex.

texasmonthly.com: How long did it take you to complete this story?

CB: It was a last-minute assignment, so I spent a couple of days in Goliad, a week doing phone interviews, and another week reading and writing.

texasmonthly.com: Do you find history pieces interesting? If so, why? If not, why not?

CB: I find historical pieces fascinating, but that may just be because of my personal and academic interest in history. I realize that a lot of people dont have the patience to read what they feel is a dry historical account, so the challenge in writing this story was to make the account socially and personally relevant.

texasmonthly.com: Off the top of your head, what percentage of the states population do you think understands the significance of Goliad?

CB: I firmly believe that anybody who was educated in Texas public schools remembers the term "the Goliad Massacre," but I also think that except for history buffs, few people actually recall what happened there. We were all taught that Goliad is historically sacredand indeed it is, for more than one reasonbut we dont really know why.

texasmonthly.com: Do you believe that Texas history is adequately taught in our states public school system? If so, why? If not, why not?

CB: Its been a while since I sat through seventh grade Texas history class, so I shouldnt comment on content. But I do regret that history at the elementary and secondary level is presented simply as an account of what happened in any given period of time. We have to wait until our college years to become engaged in the more intriguing issues of the discipline, such as questions about historical interpretation. In my case, I am really interested in the role that humans play in the writing of history.

texasmonthly.com: Did you find most residents of Goliad to be as passionate about history as Estella Zermeño and Newton Warzecha?

CB: Honestly, no. Most of the residents are conscious of their towns historical significance, but only some of them feel directly implicated in it. Mrs. Zermeño has developed a passionate interest in tracing her familys genealogy, and Mr. Warzechas entire job is to bring history to the people. I believe it takes thata personal commitment, a personal linkto bring people close to history. And everyone has one; unfortunately, not all of us have discovered it.

texasmonthly.com: Has your perception of history been changed by this story? If so, how? If not, why not?

CB: I have been reminded by this story of how messy history is. At times it was frustrating to think that I couldnt write about this thing without touching on that one, but every historian I spoke with reminded me that that is precisely what makes history complex and interesting. If writing about history is a chore, writing history is a lifelong project. And perhaps that explains why the academics I interviewed were so passionate that they all ended up screaming at me over the phone!