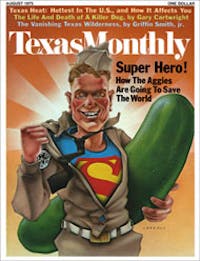 Though it’s contrary to pop­ular belief, newspapers and magazines don’t inten­tionally play down good news. The problem is all of us human beings seem to thrive on reports of disasters. It takes a monu­mental piece of good news (“Man Lands on Moon”) to steal top position on the front page from the most trivial tidbit of bad (“Ann Landers Getting Divorce”).

Feeling that this insidious tendency should be counteracted, Texas Monthly went to major universities and labora­tories around the state and posed a simple question: “Got any good news?” The answer was, “Lots.” We heard about a new lightweight plastic leg brace for polio victims, an influenza research center that’s racing the clock to beat the next worldwide flu epidemic (due about 1980), and—wonder of wonders—a voice-controlled wheel­chair. But somewhere along the line we began to notice a predictable pat­tern: something bad—polio, flu, etc.—had to happen before you could bene­fit from this “good” news.

The elusive innovation that makes your life sublime, feels great, tastes great, and isn’t fattening simply eluded discovery. But we did find five proj­ects that will—maybe not now but five years from now—make your life easier and perhaps even more fun.

Next: Fingernails on Blackboards

The aggravating rasp of a dried-out windshield wiper is a sound you need never hear again. A chemical process called FluoroKoting developed at Rice University can end such petty annoy­ances, as well as facilitate the manu­facture of industrial diamonds, make cars run better, and help you slip into a pair of rubber gloves.

Objects which have been FluoroKoted (a trademarked name for treatment with fluorine gas) are slicker, water-repellent, last longer, and do not react with most chemicals. Except for a slight luster, they are indistinguishable from untreated objects. The process has future potential application in the automobile industry, in medicine for use on devices such as rubber tubing (it keeps it from clogging up), and in the manufacture of tough, chemically inert laboratory equipment. Almost any item made of plastic or natural rubber can be FluoroKoted.

Biological warfare may be outlawed, but not against bugs. Over the next three years botanists and other scien­tists at the University of Texas will look into the practical implications of mass producing large quantities of viruses that attack insects and releasing them into the environment. Baculo-viruses, as they are known, are par­ticularly well suited as insecticides because they are believed to be host specific (they attack only a specific bug under natural conditions) and they are able to survive over long periods of time. What is yet to be tested is whether they will remain stable under the artificial processes involved in mass production. If the project is suc­cessful, it could mean that insects would no longer take such a sizeable chunk out of the world’s food and, conceivably, certain disease-transmit­ting insects could be virtually wiped out.

Now what could we use nuclear weapons for?

Root Of The Problem

The ancient Aztecs and Incas had the right idea. When they were sick, they went to nature for a cure, and no weed was too lowly or flower too exotic that it might not be tried—cautiously—as a folk medicine. So ef­fective were some of these common­place remedies that they have been passed down for centuries in certain segments of Latin American society. Today a Texas laboratory is taking a close look at some of the plants to see what makes them work. TCU’s FAST-BIOS Lab, established five years ago, is testing and analyzing an abundance of plants native to the Southwestern United States and Latin America and, as a result, some of them may well be pharmaceuticals of the future.

So far the lab has found that a par­ticular grain fungus which mimics the action of female sex hormones can be used to relieve hot flashes and other menopausal discomforts. A plant com­pound which attacks cancer cells has passed the clinical testing stage and is now being used in cancer chemothera­py. Several types of the common ironweed contain substances which inhibit insect growth (a device the plant de­veloped to protect itself from bugs) and these are being studied as natural insecticides.

Not Bordeaux, But Maybe Mogen David

Behold the latest grape joke: the University of Texas is trying to grow vineyards in the desert. Not only that, UT thinks grapes have promise as a cash crop and might turn out to be a lucrative use for some of the Univer­sity’s vast West Texas land holdings. The area around Van Horn (not ac­tually a desert, it just looks like one) bears a remarkable resemblance in cli­matic conditions to California’s Central Valley near Fresno, which is one of that state’s most prolific grape regions.

A modest demonstration project of two vineyards (twelve acres total area) has been started near Van Horn to see if grapes of wine quality can be grown. Persons interested in barefoot grape stomping need not apply just yet; it will be three years before the Longhorn grape could even begin to com­pete with the world’s great vintages.

A wildcatter who struck water used to feel like a cattle rancher reduced to running sheep. Water, however, may be just what tomorrow’s wildcatters set their drilling rigs for. Simmering far beneath the earth are eight huge deposits of hot, pressurized water which extend for about 100 miles on either side of the Texas coastline from Beaumont to Brownsville and on in­ land to Laredo. The water (temperature 350 degrees) is under such tremendous pressure that, once tapped, it flows upward on its own accord. As steam, it can be used to drive turbines, and the large amounts of methane (natural gas) in it can be extracted and burned as fuel. The federal government and private industry have made $1.2 million available to the University of Texas to do basic studies and drill a test well by 1976.