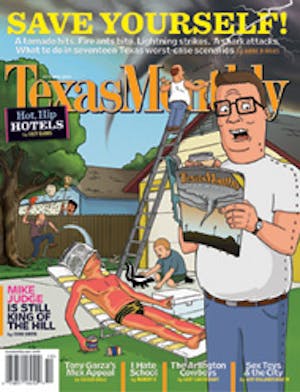 Waco is like the little engine that could. The Central Texas town tries to draw visitors to its many attractions, but many people just can’t seem to get past that standoff, which didn’t even happen within the city limits. On a recent Sunday, I decided to throw my preconceptions of Waco out the window and see the place for myself.

The first stop was the Dr Pepper Museum. If you’re a DP fan (and many Texans are), then you more than likely know that Waco is the birthplace of this carbonated beverage. If you really wanna be a Pepper, though, then a tour through the original building of the Artesian Manufacturing and Bottling Co., built in 1906, is in order. My boyfriend and I bought our tickets and stepped into a replica of the corner drugstore where Dr. Charles Alderton, a pharmacist, first created the recipe for Dr Pepper. An animatronic “Doc,” dressed in a pinstripe suit with a burgundy tie tells the story of his famous creation. Doc filled prescriptions at the corner store, which was a drug store, cigar shop, and soda fountain all rolled into one. One day he experimented by combining several of the fountain’s syrup flavors and created a beverage that in 1885 would be patented as Dr Pepper—although the drink was first known simply as the “Waco.”

We browsed around the museum and looked at amusing Dr Pepper artifacts: old soda bottles, a one-time well, and vintage advertisements, one that showed a glamorous woman with fire-engine red lips enjoying a Dr Pepper while playing tennis. Imitations of Dr Pepper were on display too. Some of the imposters had similar names and slogans, such as Dr. Schnee, R-Pep, Pep Up, Dr. Topper, Dr. Tex, Peppo, and of course the most famous knockoff, Mr Pibb. After we toured the museum, we wandered into the soda fountain downstairs and got a Dr Pepper made the old-fashioned way, by combining syrup and carbonated water directly in our cup. Ah, the good old days.

Now that we were “pepped up,” we decided to check out downtown Waco. It was a Sunday, so many of the roads were deserted; we even passed a few empty storefronts and abandoned buildings. But a local directed us to the Shops of River Square Center, an area of renovated warehouses filled with surprisingly upscale boutiques selling home accessories, furniture, clothing, and bath and body products. We also came across several bustling restaurants and bars. By this point, we were running out of time—we wanted to make it to the Texas Ranger Hall of Fame and Museum before it closed—so we had to leave before we really had the opportunity to explore.

On our way to the Ranger museum, via the path along the Brazos River called the River Walk, we stopped at the suspension bridge, completed in 1870, to take in the pretty, peaceful scenery. We walked in late to the 45-minute video detailing the history of Texas’s most famous law enforcement unit but saw enough to get a basic idea of what the organization was all about. The Rangers started in 1823 as frontier policemen and now provide investigative assistance to law enforcement agencies. While we toured the facility, we saw guns, knives, flasks, and the Rangers’ famous badges. The museum has artifacts from retired Rangers and a hall of oil paintings that evoke the legend of the Rangers and Texas itself—images of open spaces, horses, evening campfires, and tough men with the courage to enforce the law.

Tired and hungry after all this sight-seeing, we stopped for dinner at La Fiesta, a popular Tex-Mex restaurant in town. The faux windows, colorful wall murals, and turquoise vinyl chairs brought to mind a Mexican villa. Patrons can choose from a dozen margarita flavors, including guava and mango, but we were happy with a plate of sizzling chicken fajitas served with charro beans and fresh guacamole, and a Texas-size burrito filled with spicy ground beef and topped with chile con queso.

It was dusk when we finally got into our car to head back home to Austin. Were we won over by Waco? We certainly had a fun, solid trip, and we hadn’t even seen it all. If we had had more time, we could have visited the Texas Sports Hall of Fame, the Baylor University campus, the Cameron Park Zoo, or some of Waco’s lovely historic homes. Guess those’ll have to wait for next time.