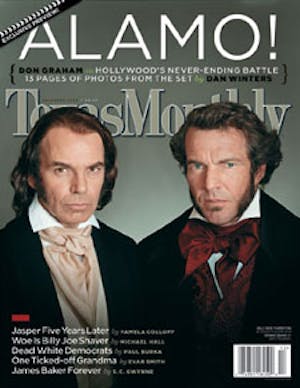 “PRAGUE WON’T LET YOU GO. The little mother has claws,” once wrote Franz Kafka, explaining his gravitation toward the European city and how difficult it was to leave it. Not surprising then, perhaps, that the first Czech immigrants to Texas in the 1850’s should have named one of their earliest settlements after their beloved capital: Praha. New hopes and futures do not erase the grip of home or memories.

Praha, Texas, is now considered one of the state’s ghost towns, but in its heyday was a bustling Czech community of about seven hundred with a church, a restaurant, a school, and several stores. Settlers from Bohemia and Moravia (now Czechoslovakia) arrived to the area in the 1850’s and bought land from the American settlers there, changing the name of the already existing village of Mulberry to Praha in 1858. Praha’s church was of particular importance to the settlers, who, passionate about their heritage, saw it as a means of preserving their traditions. Because the church eventually served as the mother parish for surrounding towns, the town would also come to be known as “Maticka Praha,” or “Mother Prague.”

It is significant, then, that Praha’s St. Mary’s Catholic Church, built in the early 1890’s, still stands and operates today, as my husband, Mike, and I discovered on a recent visit in October. After a beautiful morning drive southeast from Austin, we arrived in Praha and discovered just how small it really is: Except for a few houses and an old repair garage, the town mostly consists of the church and its cemetery. Mass had finished about half an hour before we got there, and there were still a few church members in the cemetery, but it was so quiet that all we could hear was the breeze. We visited the cemetery first; its Czech-inscribed headstones and unique plots (mostly concrete with enclosed gravel areas for flowers) reinforced for us the town’s immigrant history and community. The church itself was still open, and its delicately painted ceiling and detailed, stained glass panes ushered us into a serene space of color and light. Ah, peace.

St. Mary’s is known as one of Texas’s painted churches, structures erected for worship purposes by Czech and German immigrants and decorated on the interior with ornate designs and murals expressing their values and culture. Today these churches are celebrated for their particular style of ornamentation. Although one could devote many pages to describing St. Mary’s interior, one of the elements that struck Mike and me the most was the ceiling: Multiple shades of blue decorated with verdant foliage gave us the sense of being in an ethereal garden, while a watchful eye painted above us, framed in a triangle of light, kept us mindful of every step. It was easy to forget the church’s wooden structure because the paintings created a three-dimensional effect of marble. On the back wall, over the altar, we observed a small painting of a cathedral; we learned later that it is an image of the great cathedral in Prague.

As in years past, Praha still serves as a center for Czechs and Czech descendants in that it hosts their return, in thousands, from around Texas for yearly celebrations such as the Feast of the Assumption (August 15) and Veterans Day. And people from surrounding areas continue coming back to St. Mary’s for Sunday mass, as Mike and I could tell from the church’s bulletins and scheduled programs. It made us want to return to Praha ourselves, to witness the celebrations of Czech generations firsthand. Prague’s inexorable pull, as described by Kafka, may have actually grown some Texas roots.