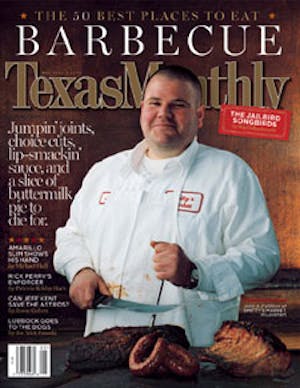 I’M CONVINCED MY LOVE OF road trips is inherited. The encryption masterminds behind the Human Genome Project may not have a chromosomal explanation for my fondness of rolled-down windows, cranked-up tunes, backseats cluttered with junk-food wrappers, and seemingly endless horizons of winding pavement, but—thanks largely to my maternal grandparents, who spent many a summer touring the country from the comforts of their Caddy—such affection is in the genes.

That’s why when a six-hour, 350-mile trip from Austin to Alpine presented itself, I gladly agreed. In fact, I even stretched the trip a couple of hours to take a more scenic route.

Day 1: I traveled through the comfy Hill Country towns nestled along U.S. 290—Dripping Springs, Johnson City, Fredericksburg. Then down Texas Highway 16 to Kerrville and a connection to Texas 173. Down the road was Bandera and U.S. 90, my main traveling companion for the next two-hundred-plus miles. Together we’d see Hondo and Sabinal, Uvalde and Del Rio, Comstock and Dryden—all the while, the landscape flattening and the passengers sharing my road becoming fewer and farther between.

Dusk was upon this day when I eventually rolled into Alpine, a peacefully silent place at the base of the Glass Mountains. As much as I’d enjoyed the confines of a rented Toyota Camry, I did find myself thanking the reservation gods for booking a room at a hotel. The Best Western would be home base for the next three nights—and while this nationwide chain is not uniquely Alpine (or even Texan) its clean quarters, ample cable TV offerings (which I soaked up for a crash course in the current fads of pop culture), and complimentary continental breakfast kept me comfortable each day.

Day 2: Yes, the impetus for this journey was destination Alpine, but the agenda—like most good trips—called for packing in as much of the local offerings as possible. So I dedicated day two to seeing some of the area’s specialties.

One of Alpine’s beauties is its proximity to other West Texas must-sees. As the right corner of a triangular constellation of towns—with Fort Davis at the apex and Marfa holding down the other base—Alpine is within roughly thirty miles of its neighbors. So I hopped back on U.S. 90 and headed for Marfa, a dusty West Texas town of about 2,500 inhabitants. Marfa’s historical highlights include a 1955 visit from Hollywood for the filming of Giant, but the town is really famous for its inexplicable Marfa Lights, whose mysterious origins have elevated the twinklers to urban-legend status. Such star features aside, my draw to Marfa emanated from the haven of minimalism: the Chinati Foundation. For $10, I spent the morning on a guided tour of portions of the foundation’s 340 acres, a playground—which includes one-time Army base Fort D.A. Russell and a converted downtown wool and mohair mill—for modernist Donald Judd and a showcase for the large-scale works of some of his contemporaries, including Dan Flavin, John Chamberlain, and Ilya Kabakov.

After brief assemblage in Chinati’s gift area, the tour headed outdoors, where we easily spotted the first display: fifteen concrete blocks stretching nearly a kilometer across the brush and into the horizon. Indoors we progressed into two converted artillery sheds (which once held German POWs during World War II) aglow with cascades of natural light playing across neatly aligned rows of aluminum boxes masterminded by Judd in the eighties. We wandered among them—one hundred in all in the two vast spaces—mouths agape at times as we took in shape and reflection. Next we visited old barracks. One housed colorful works by Judd that our guide said were conceptualizations of mathematic principles. (Yes, this went a bit over my head.) Another accommodated a step back in time, where art took the form of an abandoned Soviet schoolhouse with tables overturned and books strewn about (a work by Kabakov entitled School #6). Eventually, we caravanned to a downtown warehouse to catch Chamberlain’s wadded-up automobiles on display as sculpture, and then we broke for lunch.

I wandered a bit—into the Spanish-style Hotel Paisano and down to a gem of a bookstore (plus coffee and wine bar), the Marfa Book Company—before heading back to Alpine.

In the evening, I followed Texas Highway 118 up to Fort Davis and continued along the serene and winding road, where the only distraction was a deer that rambled across my course, until I arrived at the McDonald Observatory’s jam-packed parking lot, just in time for a star party. The night sky was still in twilight and therefore not a dark enough canvas to catch the rays from the giant flashlight our party instructor used as a pointer, but I tried to spot all the constellations he directed us to. With each passing minute, though, more and more stars seemed to enter the night’s stage, and when the sky reached its darkest pitch, I reclined under more twinkling lights than I think I ever have (not that I counted!).

Day 3: You may have noticed that food has thus far been absent from this venture. That’s because I’d been saving my culinary sampling for the evening of day three when the annual Tastes of Texas, Big Bend Style, a smorgasbord of West Texas fare, set up shop at Alpine’s Sul Ross State University. (Unfortunately, day three was a Sunday, so I was left only to window shop at historic downtown’s numerous galleries and antiques shops.) Sampling food (from chili and Chinese to brisket and enchiladas) and drink from more than 25 booths, I joined more than four hundred area residents in tasting the cuisine of such established institutions as Alpine’s Reata and Terlingua’s Starlight Theatre and newcomer Ocotillo in Lajitas—all without having to leave a single conference room.

Day 4: With my stomach still full from the night before, I skipped breakfast and got an early start for the trip home, a world that now felt miles away from the quiet culture I’d enjoyed the past three days, a world I wasn’t all too eager to get back to.